The U.S. is Replacing Good Jobs with Bad Ones

In a fancy bit of marketing, U.S. capitalists have been reborn as “job creators.”  As such, they were rewarded with lower taxes, weaker labor laws, and relaxed government regulation. However, despite record profits, their job creation performance leaves a lot to be desired.

According to the official data the last U.S. recession began in December 2007 and ended in June 2009. Thus, we have officially been in economic expansion for almost five years.  The gains from the expansion should be strong and broad-based enough to ensure real progress for the majority over the course of the business cycle.  If not, it’s a sign that we need a change in our basic economic structure.  In other words, it would be foolish to work to sustain an economic structure that was incapable of satisfying majority needs even when it was performing well according to its own logic.

A recent study by the National Employment Law Project titled The Low-Wage Recovery provides one indicator that it is time for us to pursue a change.  It shows that the current economic expansion is transitioning the U.S. into a low wage economy.

The figure below shows the net private sector job loss by industries classified according to their medium wage from January 2008 to February 2010 and the net private sector job gain using the same classification from March 2010 to March 2014. As we can see, the net job loss in the first period was greatest in high wage industries and the net job creation in the second period was greatest in low wage industries. 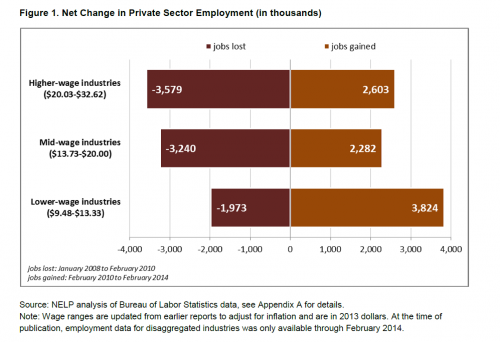 As the study explains:

The food services and drinking places, administrative and support services (includes temporary help), and retail trade industries are leading private sector job growth during the recent recovery phase. These industries, which pay relatively low wages, accounted for 39 percent of the private sector employment increase over the past four years.

If the hard times of recession disproportionately eliminate high wage jobs and the “so called” good times of recovery bring primarily low wage jobs, it is time to move beyond our current focus on the business cycle and initiate a critical assessment of the way our economy operates and in whose interest.

And according to a popular quote from Elizabeth Warren, if the minimum wage had kept up with productivity, it would be ~$22 an hour, solidly in the so-called 'higher-wage industries.'

...And your readers can do... What, exactly?
I'm not trying to be sarcastic here, just, what can we do to change this?

[…] now for why that isn’t really very good news at all. Good jobs went away only to be replaced by crappy ones with low wages and low/no benefits. This is double […]