Thankfully, Violence Against Women on the Decline

Shock, frustration, and rage. That’s our reaction to the hate-filled video record that Elliot Rodger left behind. The 22-year-old, believed to have killed 6 people in Santa Barbara this week, left behind a terrible internet trail.I cannot and will not speculate about the “mind of the killer” in such cases, but I can offer a little perspective on the nature and social context of these acts. This sometimes entails showing how mass shootings (or school shootings) remain quite rare, or that crime rates have plummeted in the past 20 years. I won’t repeat those reassurances here, but will instead address the bald-faced misogyny and malice of the videos. It outrages us to see a person look into a camera and clearly state his hatred of women — and then, apparently, to make good on his dark promises. It also raises other awful questions. Are these sentiments generally held? If you scratch the surface, are there legions of others who would and could pursue “retribution” as Mr. Rodger did? Is serious violence against women on the rise?Probably not. Rates of sexual violence in the United States, whether measured by arrest or victimization, have declined by over 50 percent over the last twenty years. As the figure shows, the rape and sexual assault victimization rate dropped  from over 4 per 1000 (age 12 and older) in 1993 to about 1.3 per 1000 in 2012.  And, if you add up all the intimate partner violence (including all rape, sexual assault, robbery, and aggravated assault committed by spouses, boyfriends, or girlfriends), the rate has dropped from almost 10 per 1000 in 1994 to 3.2 per 1000 in 2012. The numbers below include male victims, but the story remains quite consistent when the analysis is limited to female victims. 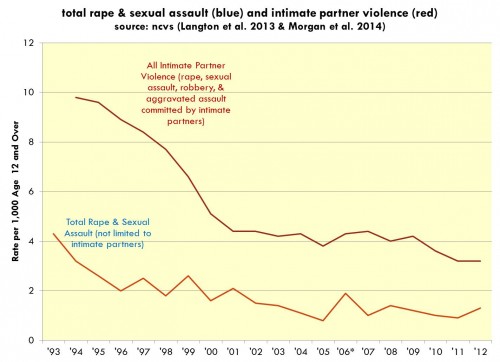 Of course, misogyny and violence against women remain enormous social problems — on our college campuses and in the larger society. Moreover, the data at our disposal are often problematic and the recent trend is far less impressive than the big drop from 1993 to 2000. All that said, “retribution” videos and PUA threads shouldn’t obscure a basic social fact:  22-year-olds today are significantly less violent than 22-year-olds a generation ago.

Chris Uggen is a professor of sociology at the University of Minnesota and the author of  Locked Out: Felon Disenfranchisement and American Democracy, with Jeff Manza. You can follow him on twitter and at his blog, where this post originally appeared.  Cross-posted at Pacific Standard.

question: is this the rate compared to the total population of the USA over 12 yo?

Isn't the population aging in general? The rate for a specifically younger cohort might be more appropriate. If the nation is aging, per capita crime rate would go down since crimes are usually committed by the younger. (no?)

Thanks for reposting! One important addendum here is that the NCVS likely undercounts rape and sexual assault (see http://www8.nationalacademies.org/onpinews/newsitem.aspx?RecordID=18605). Analyzing the trend, though, the important question is whether the undercount is worse today than it was in 1995 or 2000. My view is that it has been a consistent undercount and that reporting rates have likely risen over the period. I agree with the NRC, though, we really need a new and more focused data collection effort on rape and sexual assault.

[…] I think the Week article misses some of the points.  Most gun violence is not related to mass killings like this.  Most gun violence is suicide, and then a lot of the remaining violence related to intimates engaged in things like the drug trade. All of which are tied to systemic wealth imbalance, but the idea that status competition in addition to out-and-out misogyny could have been involved with Elliot could explain a bit of the why this is so specific to US even compared with countries with awash in weapons.  I still think a hate-monger PUA-worshiping individual like Elliot Rodgers may have killed women anyway as violence against women is older than American hyper-wealth inequity, and was significantly worse even in the recent past. […]

[…] Thankfully, Violence Against Women on the Decline … http://thesocietypages.org/socimages/Of course, misogyny and violence against women remain enormous social problems — on our college campuses and in the larger society. Moreover, the data at our disposal are often problematic and the recent trend is far … […]

Oh, I guess we can stop worrying about the epidemic of male violence against women, then. /s

[…] available evidence suggests incidents of sexual violence and sexual harassment are at unprecedented lows, while metrics of female achievement sit at […]