A new study finds that users of classified ads discriminate against people perceived as black.  Over a one year period, economists Jennifer Doleac and Luke Stein placed fake ads for used iPods in local online classified.  They included photographs of the product held by a hand.  Some hands were light-skinned, others dark, and they also included a second potentially stigmatized identity, men with tattoos.  Otherwise the ads were all identical. 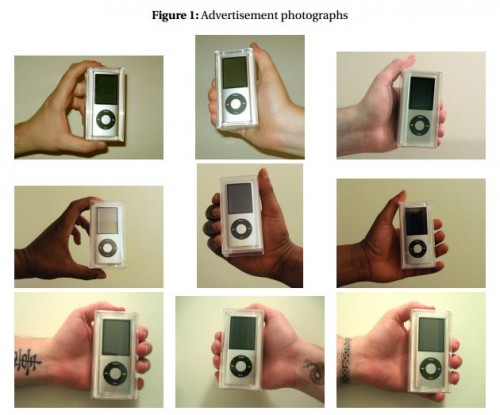 Doleac and Stein found that buyers were less likely to contact or make a deal with black sellers; they received 13% fewer responses and 17% fewer offers.  When they did receive an offer, the price suggested was slightly lower than that offered to presumably white sellers.

Buyers also seemed to be significantly more suspicious of black sellers.  When interacting with a seller with brown skin, Doleac and Stein write:

Black sellers did especially poorly in the Northeast, when there wasn’t very much competition, and in markets that were racially isolated or had high crime rates.

Notably, buyers discriminated against people with wrist tattoos at about the same rate, suggesting that both tattoos and brown skin inspire similar levels of distrust.

H/t to Abi Jones for the link. Cross-posted at Pacific Standard.

Black sellers did especially poorly in the Northeast, when there wasn’t very much competition, and in markets that were racially isolated or had high crime rates. http://goo.gl/gpKS7D

It's difficult to take these findings seriously when they did not control for the quality of the photos at all. The flash glare, lighting, focus and balance differ significantly within and between photo groups. It's very hard to imagine that photo quality doesn't have a relationship with trust in online sales.

There have been numerous stories where Black criminals using craigslist have robbed and killed people. Nothing wrong refusing to deal with someone in private transactions. My safety trumps your social agenda.

I think describing a craigslist ad as entrepaneurship is a little generous.

If you read the study you will find:

"Furthermore, black sellers do worst in the most racially isolated markets and markets with high property crime rates, consistent with channels through which we might expect statistical discrimination to operate."

I myself will avoid dealing with sellers on CL who live in the city, and will pay a premium for an item located nearby or in a wealthier suburb. The reasons are numerous, but first and foremost being safety. The city I live near is a high crime area. Who in their right mind would travel to a high crime area with a few hundred dollars of cash in their pocket to meet an anonymous person (black or white)? Simple deduction along with an understanding of demographics in my city would lead me to assume (correctly or not) that a black seller would have a greater chance of living in a higher crime area. Do I want to travel to that place to save a few bucks on an iPod? This judgment is not an indictment of the individual, rather a risk assessment based on statistical data (causality aside) . Given the fact that Tattooed White sellers were discriminated at the same rate, it seems likely that most buyers were operating out of concern for their safety rather than racism. You can blame the "man" all you want for crime in black areas, but the fact remains that blacks are the ones largely committing those crimes, and that they have cultivated a "no snitch culture" and a distrust of police (justified or not). The authors of his study address this in their Racial Isolation section, but I think they underestimate it's importance to individuals savvy enough to use a computer :)

The study also states:
"In addition, buyers corresponding with black sellers exhibit lower trust: They are 17% less likely to include their name in e-mails, 44% less likely to accept delivery by mail, and 56% more likely to express concern about making a long-distance payment."
Craigslist expressly states not to make long distance payments, or deal with items by mail. I don't care if the seller were dressed in a nun's habit, I would not buy something off CL from them through the mail.

Interesting. I am Black and have purchased many items from craigslist. The sellers have always been white and 100% of them asked me to show up at their house to buy the items. My name could easily belong to a person of either race, and none were surprised by me when I showed up. One woman had me take the furniture and leave the cash under the rug, but when she saw that I had trouble getting it into my tiny car she came out and helped me dismantled it. We talked about grad school and I left with a $100+ desk for $30 :)