Gender at the NY Times: The Most Comprehensive Analysis Ever

In this post I present the most comprehensive analysis ever reported of the gender of New York Times writers (I think), with a sample of almost 30,000 articles.

This subject has been in the news, with a good piece the other day by Liza Mundy — in the New York Times — who wrote on the media’s Woman Problem, prompted by the latest report from the Women’s Media Center. The WMC checked newspapers’ female byline representation from the last quarter of 2013, and found levels ranging from a low of 31% female at the NYT to a high of 46% at the Chicago Sun-Times. That’s a broad study that covers a lot of other media, and worth reading. But we can go deeper on the NYTimes, thanks to the awesome data collecting powers of my colleague Neal Caren.

1. Women were the first author on 34% of the articles. This is a little higher than the WMC got with their A-section analysis, which is not surprising given the distribution of writers across sections.

2. Women wrote the majority of stories in five out of 21 major sections, from Fashion (52% women), to Dining, Home, Travel, and Health (76% women). Those five sections account for 11% of the total.

3. Men wrote the majority of stories in the seven largest sections. Two sections were more than three-fourths male (Sports, 89%; and Opinion, 76%). U.S., World, and Business were between 66% and 73% male.

Here is the breakdown by section (click to enlarge): 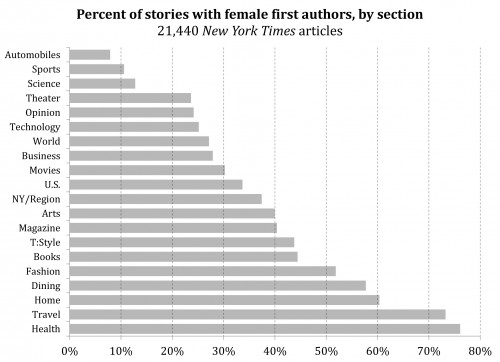 Since we have all this text, we can go a little beyond the section headers served up by the NYTimes‘ API. What are men and women writing about? Using the words in the headlines, I compiled a list of those headline words with the biggest gender difference in rates of appearance.

For example, “Children” occurred 36 times in women’s headlines, and 24 times in men’s headlines. Since men used more than twice as many headline words as women, this produced a very big gender spread in favor of women for the word “Children.”  On the other hand, women’s headlines had 10 instances of “Iran,” versus 85 for men. Repeating this comparison zillions of times, I generated these lists:

Here is the same table arranged as a word cloud, with pink for women and blue for men (sue me), and the more disproportionate words larger (click to enlarge): 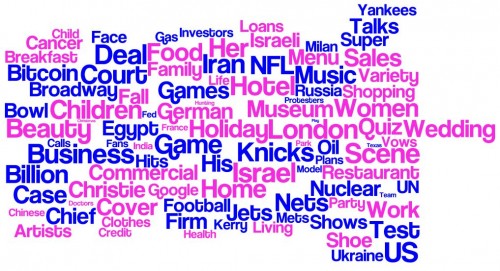 What does it mean?

Research shows that when women are charge, they tend to produce better outcomes for women below them in the organizational hierarchy. Jill Abramson, the NYTimes‘ executive editor, is aware of this issue, and proudly told the Women’s Media Center that she had reached the “significant milestone” of having a half-female news masthead (which is significant). So why are women underrepresented in such prominent sections?  I’m really wondering. The NYTimes doesn’t even do as well as the national average: 41% of the 55,000 “News Analysts, Reporters and Correspondents” working full-time, year-round in 2012 were women.

Organizational research finds that large companies are less likely to discriminate against women, and we suspect three main reasons: greater visibility to the public, which may complain about bias; greater visibility to the government, which may enforce anti-discrimination laws; and greater use of formal personnel procedures, which limits managerial discretion and is supposed to weaken old-boy networks. Among writers, however, an informal, back-channel norm still apparently prevails — at least according to a recent essay by Ann Friedman. Maybe NYTimes‘ big-company, formalized practices apply more to departments other than those that select and hire writers.

A more in-depth discussion of these findings, with details on Cohen and Caren’s research methods, can be found at Family Inequality. Cross-posted at Pacific Standard.

The word-list association would be more interesting if you compare the men-women word frequency within each of the sections, normalized for its gender-authorship fraction.

So apparently we've reached the point that we can all recognize oppressive gender norms, but somehow can still dismiss them entirely with flippant phrases like "sue me"

" Jill Abramson, the NYTimes‘ executive editor, is aware of this issue, and proudly told the Women’s Media Center that she had reached the “significant milestone” of having a half-female news masthead (which is significant)."

Not so much now that Abramson has been fired. Maybe time to update this article?

It's my understanding that headlines are seldom written by the writer of the article, and more often by editorial staff; by analyzing headlines, you're looking at a different picture than that presented by bylines. Not necessarily less informative, nor unrelated, but it's different data, generated by different people. I don't know how it is done at the Times specifically, but being a very tightly edited publication I'd assume editorial authorship of most, if not all, headlines.

I like Mike2011's suggestion for possibly more interesting word analysis (again, though, with body text preferred over headlines). One might also narrow it down to single-author articles, or even single-author columnists, to get at the least mediated vocabulary.

But even then, we'd need to keep in mind that news reportage is a highly stylized genre in the first place, and a ship as tightly run as the Times will strictly impose both genre conventions and it's own style (overall as well as per section), which will be internalized by writers and editors. The effects of authorship on word choice is going be obscured by the effects of editorship and in-house and in-department style.

On multiple bylines: lead bylines on complex hard news stories can be awarded according to seniority rather than input (though again I don't know to what degree this is true at the Times specifically).

OT, but - do you have any control at all over the third-party adverts that appear at the bottom of the page (under "Around the Web")? Because the advert for the listsicle "You won't believe these 10 stars attempted suicide" is really fucking offensive.

Why do women write about London so much?

Gender at the NY Times: The Most Comprehensive Analysis Ever | World Wide Weber — May 28, 2014

[…] Gender at the NY Times: The Most Comprehensive Analysis Ever […]

[…] Sociological Images, a curious pattern in bylines and subject matter in the New York Times “based on 21,440 articles […]

Gender At The New York Times: The Most Comprehensive Analysis Ever | NYC Startup News — May 28, 2014

[…] Via: Gender At The New York Times: The Most Comprehensive Analysis Ever […]

maybe because im a guy (a white one at that!!) who cares? is the job being done? is it being done well? Thats all that matters to me

Great post, have you any data to investigate the change in representation over a period of years or decades?

[…] a look at the results of the most comprehensive analysis ever of gender at the New York Times, including breakdowns of bylines by section and words used disproportionately by men and women […]