Why Has Godzilla Grown?

Last week the internet chuckled at the visual below.  It shows that, since Godzilla made his first movie appearance in 1954, he has tripled in size. 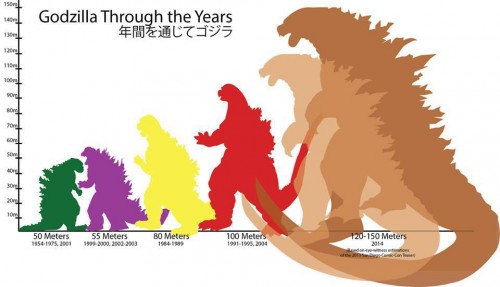 Kris Holt, at PolicyMic, suggests that his enlargement is in response to growing skylines. She writes:

As time has passed, buildings have grown ever taller too. If Godzilla had stayed the same height throughout its entire existence, it would be much less imposing on a modern cityscape.

This seems plausible.  Buildings have gotten taller and so, to preserve the original feel, Godzilla would have to grow too.

But rising buildings can’t be the only explanation.  According to this graphic, the tallest building at the time of Gozilla’s debut was the Empire State Building, rising to 381 meters.   The tallest building in the world today is (still) the Burj Khalifa.  At 828 meters, it’s more than twice as tall as the Empire State Building, but it’s far from three times as tall, or 1,143 meters. 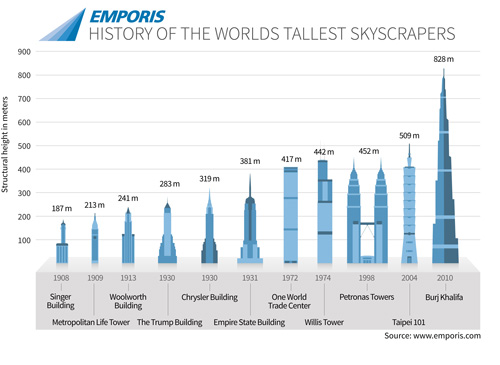 Is there an alternate explanation? Here’s one hypothesis.

In 1971, the average American was exposed to about 500 advertisements per day. Today, because of the internet, they are exposed to over 5,000.  Every. Day.

Media critic Sut Jhally argues that the flood of advertising has forced marketers to shift strategies.  Specifically, he says

So overwhelming has the commercial takeover of culture become, that it has now become a problem for advertisers who now worry about clutter and noise.  That is, how do you make your ads stand out from the commercial impressions that people are exposed to.

One strategy has been to ratchet up shock value.  “You need to get eyeballs. You need to be loud,” said Kevin Kay, Spike’s programming chief.

So, to increase shock value, everything is being made more extreme. Compared to the early ’90s, before the internet was a fixture in most homes and businesses, advertising — and I’m guessing media in general — has gotten more extreme in lots of ways. Things are sexier, more violent, more gorgeous, more satirical, and weirder.

So, Godzilla because, eyeballs.

The skyline of a city is made up by the median of the buildings' height and not worlds superlatives, so this should be rechecked ;-)

.. Maybe Godzilla ages twice as fast as the buildings.

If you look carefully at the dates on the Godzilla chart, he didn't just grow and grow and grow. He was 50m in the first films, then 80m, then 100m, but then went back to 55m, 50m, 55m, then up to 100m again, and finally the big guy at the end. So there is an overall trend towards larger lizards, but it's not quite as linear as the image suggests.

I guess I'd agree with this premise if it is an indirect way of focusing on the fact that Godzilla is competing with a flood of popular movie monsters. Cloverfield, Pacific Rim, etc. As a result, he can't just be the same Godzilla that movie-goers are already familiar with. When the first Godzilla came out, it created a brand new genre and didn't have to do much to be "the" movie monster.

So it doesn't make much sense that a chart full of skyscrapers from other countries are being used to explain why Godzilla would go up in size. A chart of Japanese skyscrapers and buildings should be used instead, with an international skyscraper chart beginning around 1998 (since that's when the first American remake was done).

The theory makes sense, Godzilla wouldn't be much of an intimating monster if it was smaller than the buildings being destroyed. If the buildings are getting bigger (in the area where Godzilla is being filmed) then Godzilla would have to grow to keep the visual affect. But this: "According to this graphic, the tallest building at the time of Gozilla’s
debut was the Empire State Building, rising to 381 meters." doesn't make sense because the movie was filmed in Tokyo with Godzilla's size being based off of the largest building INSIDE Tokyo.

Is there an alternate explanation? Here’s one hypothesis.

Makes just as much sense as hipothesizing that Godzilla's size follows Moore's Law.

I mean, as long as we are making up spurious correlations.

[…] link Dave Johnson enough; the real reason for the War on Teachers?; introducing Naia; and Godzilla is […]

Could be hormones in the water.

But have Tokyo buildings gotten taller? That's the real question.

This is such fluffy crap. He's bigger because they want him to be more impressive and Massive=impressive (apparently). But if you want another theory- weapons. We need a creature big enough to be impervious to our standard military attack so they make him bigger and tougher as military weaponry advances.

[…] Filezilla, unlike Godzilla, has remained roughly the same size over its lifetime. [Back to spot ↩] […]

I would love to fuck Godzilla up the ass.

'Godzilla' proves that when it comes to Hollywood, size matters | buzzcarl — June 3, 2014

[…] College with a Ph.D. in sociology, recently wrote a piece for the website Sociological Images commenting on a graph that’s been circulating online regarding the size of the new Godzilla. Wade explores several […]

American obesity is clearly the answer. We need Godzilla to be bigger to feel more comfortable with our own girth.