How Republican Women Lose Out in the Polarization of Politics

There are more women in political office than ever, but the U.S. is not on the forefront of this change.  In 2013, the U.S. Congress was 18% female which, internationally, places us in the middle of the pack.

The Democrats can boast better numbers than the Republicans, but it wasn’t always this way.  At the Scholars Strategy Network, sociologist Danielle Thomsen observes that the Democratic party (green and blue) has increased female representation much quicker than the Republicans (red and purple), but only since the ’80s or so. 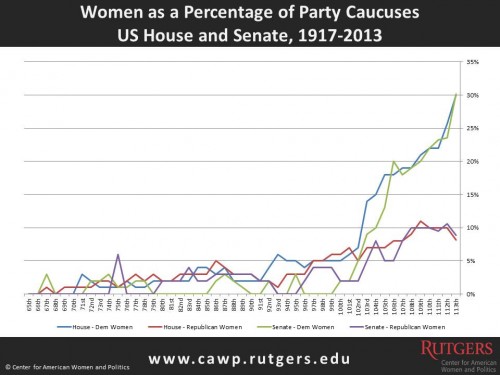 Thomsen argues that part of the reason for this difference has to do with increasing polarization in politics.  Both the Democratic and Republican parties have become more ideologically extreme, but this has hurt Republican recruitment of women more than Democratic ones.  This is because Republican women tend to be more moderate, on average, than Republican men.  Since there is less room for moderation in the party, the selection process favors more conservative politicians.  Among that group, there are very few women.

This hasn’t hurt the Democrats as much, since Democratic women are not more likely than Democratic men to hold moderate views.  The opposite, in fact, may be true, increasing the rate at which women may be picked up and supported by the party.

Or it could be that Republicans are waging a war against women since the 80s. See, for example, "The Republican War Against Women: An Insider's Report from Behind the Lines" by Tanya Melich.

Could also be because of the way the media treats Republican women. Just look at the nasty treatment of Sara Palin for example.

Could you please explain how the Democratic party is "ideologically extreme"?