This is a picture of a statue in Lexington, KY, in honor of Civil War general John H. Morgan. It depicts him on his favorite horse, Black Bess. The inscription is “Gen. John H. Morgan and His Bess.” 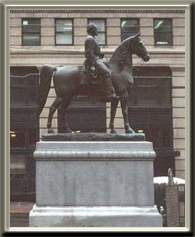 Here’s what’s interesting about this: Bess, as you might guess, was a mare — a female horse.  The statue, however, has testicles. You can see them in the picture below. The sculptor gave Bess testicles because he considered a mare an unworthy mount for a general — despite the fact that Morgan himself seemed to think she was just fine. 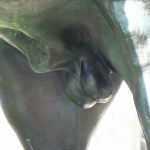 I found out about this in Lies Across America: What Our Historical Sites Get Wrong by James W. Loewen. Top image borrowed from here. This post originally appeared in 2007.

That is hilarious. How ridiculous are we as a society when our rigid, distorted gender identities come to define animals? Or rather - likenesses of historical animals...

Horses are portrayed "rearing up" only when the rider has died in battle; I'm assuming General Morgan did not, and that's why Bess is on all fours.

But the testicle thing is pretty ridiculous.

[...] recently we saw men’s nipples airbrushed out of a Wrestle Mania billboard. On the other hand, testicles were added to a statue of Civil War General John H. Morgan sitting in his favorite horse, Bess…who, as you might [...]

I think this can go into the category of "silly", when you get down to it.

Maybe the sculpter is gay?

Or he just felt like playing with balls and sculpting them?

Maybe the horse was a maphradite?

[...] is basically a summary of an old post from Sociological Images, but I could not stop laughing when I read it, so I thought I would include [...]

How do you know that? Maybe it was a plain old mistake.

Another interesting fact...this piece was commissioned by the Daughters of the Confederacy, which speaks to the fact that gender and male supremacy is something that is enacted and upheld by men and women alike.

I would guess that the artist put the testicles on the horse because it would have been considered too provocative to put them directly onto General Morgan. But the message is loud and clear.

It's not unheard of for celebrated and mythical figures to be depicted nude in sculpture in other countries, and not just in the antiquities. I spotted a modern nude sculpture of Simon Bolivar riding a horse (not sure if the horse was male) in Colombia, and wondered if we'll ever be treated to a nude George Washington in the US.

By the way, does the horse have a penis too, or would that be too literal?

I think you're starting to run out of material...

Too funny. I can attest to the PITA-ness of intact stallions as ordinary riding horses when in the presence of other horses (as would be the case on a battlefield). One has to keep them in check, otherwise they spend a fair amount of time trying to sniff other horses' butts (pheromones) looking for mares in heat. This tendency would be annoying if one was just trying to sit on the horse and use a pocket telescope to view distant troop action, keep one's mind on the battle, make decisions. Mares are only intermittently annoying as ordinary riding horses, when they go into heat. Out of heat, they can be perfectly non-distractable and thus suitable for an easy riding horse in a chaotic environment with lots of other horses around. The other reliable no-fuss horse for the situation would be a gelding.

there's something weird with the comments here: the post reads it's from 3 days ago (25/04/2014) and most of the comments were made on the same date but a few report 4/5 years ago as publishing date...

[…] Why has Farley never written on this statue in Lexington of General John Morgan and his mare Bess? See, Bess has testicles because the sculptor felt it wasn’t manly enough for a general to be riding around a mare. This says a good bit about the late 19th century’s obsession with manliness and war, with the imperialists of the period going through a Greatest Generation-esque fetishization of the military experience of their fathers and comparing their own manhood unfavorably to them. Proper Civil War memory could provide young men examples of bravery, courage, and manhood they could then take with them to Cuba, the Philippines, or whatever Latin America country we decided to invade on a given early 20th century day. And thus, a man’s horse needed to be a male, at least so it seems to have needed to be for this gender-worried sculptor. […]

If it weren't for those ball, generations of UK undergraduates would have nothing else to paint red.