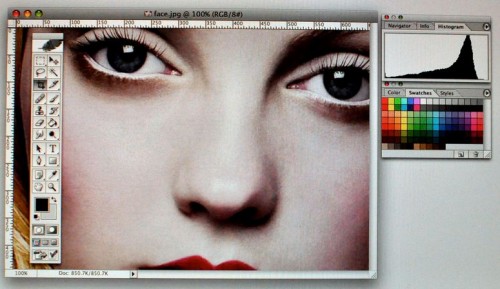 Writer and director Elena Rossini has released the first four minutes of The Illusionists.  I’m really excited to see the rest.  The documentary is a critique of a high standard of beauty but, unlike some that focus exclusively on the impacts of Western women, Rossini’s film looks as though it will do a great job of illustrating how Western capitalist impulses are increasingly bringing men, children, and the entire world into their destructive fold.

The first few minutes address globalization and Western white supremacy, specifically.  As one interviewee says, the message that many members of non-Western societies receive is that you “join Western culture… by taking a Western body.”  The body becomes a gendered, raced, national project — something that separates modern individuals from traditional ones — and corporations are all too ready to exploit these ideas.

Watch for yourself (subtitles available here):

I'm an Asian woman living in America, but when I went oversea to Asia, there are alot of skin whiten cream or bleaching cream. I see image of French model advertising some of these brands. It's insane.

In my experience, most men either don't care about this level of perfection in a women or are turned off by it, thinking only superficial women waste their time on it. I wonder why it persists...?

a european case
thiessen, I. 2002. Body-Alterations and the Creation of the Other: A Macedonian Case
http://scholarworks.dlib.indiana.edu/journals/index.php/aeer/article/download/456/562

The unattainable factor in advertising is a symptom of the
fact that we've structured our society around the exploitation of an
evolutionary bias. We're all inclined to collect items which we think
will enhance our sexual attractiveness. We work out what these items are
observationally, ie. "that person is treated as if they are sexually
attractive, what can I do to copy them". We're hardwired to be aspirational and to try to accumulate items or traits which we perceive to be attractive in others.

Mass advertising exploits this bias to the point of over-extension but I believe it's more to do with scale than anything else. In order to appeal to the maximum number of consumers, advertisers have no choice but to present a universally unattainable ideal, to the point where they need to airbrush unnaturally beautiful people to make them more unattainably perfect.

The adoption of "the western look" isn't entirely about the spread of western beauty ideals, although it's a factor where that beauty model has become an aspirational ideal. It would be more accurate to say that the presentation of unattainable ideals is a foundational element to the consumerist economic model and, as this model is adopted by countries and societies, local aspirations are over-extended to similarly gross proportions.

Exposing the truth about industry tricks like airbrushing probably won't change things a whole lot, you already know you won't look like the model on the poster, you want to believe you'll look more like the model than you otherwise would, the degree to which they are unattainable isn't that important. The competition between brands is the reason that the consumer model can never, ever produce honest advertisements or anything other than unattainable models of perfection.

[…] The upcoming documentary The Illusionists explores the global beauty industry. […]

#adoptTheIllusionists – Live Updates! | THE ILLUSIONISTS - a documentary about body image and globalization — April 23, 2014

[…] the meantime, The Illusionists’ 4 minute open and #adoptTheIllusionists have been featured on Sociological Images, Jezebel, Feministing, Women You Should Know and Indiewire!!! Miss Representation, Adbusters and […]

#adoptTheIllusionists - The Next Steps | THE ILLUSIONISTS - a documentary about body image and globalization — April 28, 2014

[…] grabbed the attention of virtually all my favorite blogs and non-profits organizations. Jezebel, Sociological Images, Feministing and Indiewire wrote about the film. Miss Representation, Adbusters and the FBomb […]

Long ago John Kenneth Galbraith wrote convincingly about the ways in which advertising tends to work in modern capitalism, but it must also be said that the search for a kind of perfect beauty or ideal image is not merely the product of modern capitalist advertising. Long before the 16th century there were many ways in which both women and men were encouraged to look a certain way and act a certain way. Think of ancient cultures in what we now call India and China. Think of Japan. Think of ancient Egypt and Greece. It is as easy to lie with selected images as it is to lie with statistics. The opposite side of the coin is, of course, all of those people who still sunbathe to get a good tan and look brownish. Part of the allure of beauty (in women and men) is the unattainable, the distant, the exceptional. Fashion models are not so much beautiful as "exotic" (e.g. Victoria's secret tv specials). It is all too easy to blame everything on "capitalism". The reification of human bodies by human beings has probably existed since the first human beings, say, 200,000+ years ago.