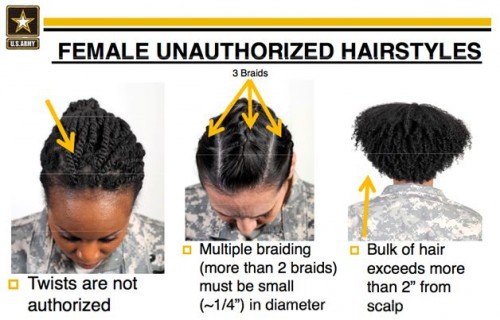 Sgt. Jasmine Jacobs of the National Guard in Georgia has always plaited her hair into two twists around her head. She has been in the military for six years and has worn her hair natural (meaning no chemical treatments [perms] or hair extensions [weaves]) for four of those years. But according to the new hair-grooming requirements the U.S. Army recently released, her hair is now out of regulation.

And so are the Afro-centric hairstyles of many black women in the Army, who make up 31 percent of Army women.

Jacobs, who said she is “kind of at a loss now with what to do with my hair,” has started a White House petition asking the Army to rethink its new hair guidelines. The petition has collected more than 7,000 signatures from soldiers and civilians, but needs to reach 100,000 signatures by April 19th in order for the White House to address it.

The new Army Regulation 670-1  was published Tuesday and illustrates with photos the types of hairstyles that are unauthorized for women. Those include dreadlocks, twists or any type of matted or coiled hair. A particularly cumbersome requirement disallows the bulk of a woman’s hair to “exceed more than 2″ from her scalp.” That rules out Afros and most types of non-chemically altered black hair.

Basically, almost every natural hair option that black women in the Army could wear is now off limits. One of the few traditionally natural hairstyles that was listed as appropriate is cornrows, but a slew of specifications and rules surrounded even that. The diameter of each cornrow can’t be more than one-fourth of an inch, and no more than one-eighth of an inch of scalp may be shown between cornrows.

The only way to realistically meet the new standards would be to shave one’s head, perm one’s hair or wear weaves or wigs.

Jacobs said twists like the one she wears are very popular among black women soldiers because the style requires little maintenance when in the field. Her hair’s thickness and curliness makes pulling her hair back into a bun (a style popular among white women soldiers) impossible.

A spokesperson for the Army said the grooming changes are “necessary to maintain uniformity within a military population.” When that need for “uniformity” erases the ethnic differences of a group of women and forces them to constrain themselves to European standards of hair, it presents a serious problem.

“I think, at the end of the day, a lot of people don’t understand the complexities of natural hair… I’m disappointed to see the Army, rather than inform themselves on how black people wear their hair, they’ve white-washed it all,” said Jacobs.

While the uniformity excuse is BS, I can't help but wonder, looking at the hairstyles at the top of this post, if the bulkier styles might be a problem under a helmet? Just from a purely practical perspective. Speaking as a guy who's always had long hair, and sometimes worn it in high tails (at the crown of the skull), that's hard enough to get under a bike helmet, let alone the needs of military armor.

Wait till you hear about their policy on beards.

While this mostly seems not to have considered the racial differences in hair, and I do not see why the twists are a problem, having difficulty attractively conforming to these rules would not only be an issue for black women, though it is perhaps more likely to be one for them than white women. I have very thick, very slippery hair which is next to impossible to wear pulled back in a bun unless great amounts of time, effort, hair product and hairpins are used. Once this is accomplished the bun would be large and probably not work anyhow. So I would have to wear my hair cut quite short. This may or may not suit all woman so anyone with hair like mine is faced with choosing something they find aesthetically unappealing. Black women wearing natural hair can also cut it very short. It strikes me that a military career is not the place to be concerned with appearance.

Why isn't it just flat out required that everyone shave their head, no deviation? Its not like you join the military to be a unique individual.

If you think the regulations on hair in the military is difficult for black women, you should see the strict rules placed on the hairstyles of black men :P

But seriously, what's wrong with a flat twist?

In the first place, regulations wouldn't have been created if people weren't pushing the limits. There's always one idiot who ruins it for people. Second, this is the military, not the real world. Try being male. Gods help you if you are mtf transgender. You don't get to have hair at all.

I spent 4 years on active duty in the Army, during Desert Storm. I remember hair being a constant source of difficulty for ALL of us women, regardless of hair texture. The degree to which the rules regarding our hair were enforced depended upon your unit commander or individual supervisor. Some were real sticklers and constantly harassed female soldiers for the smallest infraction, others were more lenient. And shaving your head is NOT an option, as the military has always stated that they don't want their female soldiers to look too "masculine" (which is another problem, in itself).

The military should be concerned with hairstyles that are clean, neat and safe. and perhaps not excessively showy, since they are the military. Twists can certainly meet that standard, as can larger braids and locs. Sign the petition if you agree.

A weird throwback move from an institution that is perhaps our finest.

what about relaxed hair is it allowed in the army?