Does Sleeping with a Guy on the First Date Make Him Less Likely to Call Back?

Let’s imagine that a woman — we’ll call her “you,” like they do in relationship advice land — is trying to calculate the odds that a man will call back after sex. Everyone tells you that if you sleep with a guy on the first date he is less likely to call back. The theory is that giving sex away at a such a low “price” lowers the man’s opinion of you, because everyone thinks sluts are disgusting.* Also, shame on you.

So, you ask, does the chance he will call back improve if you wait till more dates before having sex with him? You ask around and find that this is actually true: The times you or your friends waited till the seventh date, two-thirds of the guys called back, but when you slept with him on the first date, only one-in-five called back. From the data, it sure looks like sleeping with a guy on the first date reduces the odds he’ll call back. 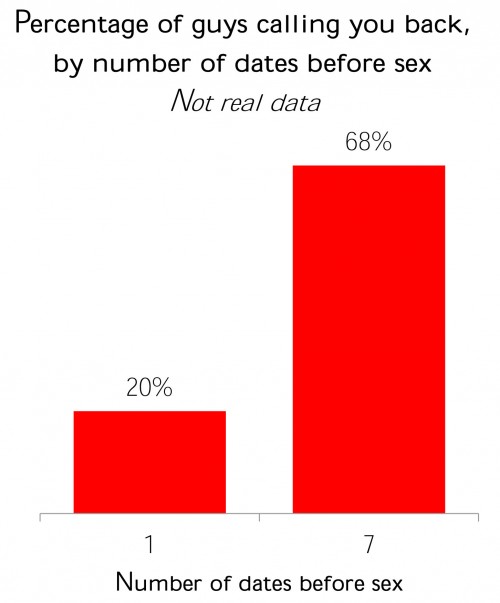 So, does this mean that women make men disrespect them by having sex right away? If that’s true, then the historical trend toward sex earlier in relationships could be really bad for women, and maybe feminism really is ruining society.

Like all theories, this one assumes a lot. It assumes you (women) decide when couples will have sex, because it assumes men always want to, and it assumes men’s opinion of you is based on your sexual behavior. With these assumptions in place, the data appear to confirm the theory.

But what if that those assumptions aren’t true? What if couples just have more dates when they enjoy each other’s company, and men actually just call back when they like you? If this is the case, then what really determines whether the guy calls back is how well-matched the couple is, and how the relationship is going, which also determines how many dates you have.

What was missing in the study design was relationship survival odds. Here is a closer look at the same data (not real data), with couple survival added:

By this interpretation, the decision about when to have sex is arbitrary and doesn’t affect anything. All that matters is how much the couple like and are attracted to each other, which determines how many dates they have, and whether the guy calls back. Every couple has a first date, but only a few make it to the seventh date. It appears that the first-date-sex couples usually don’t last because people don’t know each other very well on first dates and they have a high rate of failure regardless of sex. The seventh-date-sex couples, on the other hand, usually like each other more and they’re very likely to have more dates. And: there are many more first-date couples than seventh-date couples.

So the original study design was wrong. It should have compared call-back rates after first dates, not after first sex. But when you assume sex runs everything, you don’t design the study that way. And by “design the study” I mean “decide how to judge people.”

I have no idea why men call women back after dates. It is possible that when you have sex affects the curves in the figure, of course. (And I know even talking about relationships this way isn’t helping.) But even if sex doesn’t affect the curves, I would expect higher callback rates after more dates.

Anyway, if you want to go on blaming everything bad on women’s sexual behavior, you have a lot of company. I just thought I’d mention the possibility of a more benign explanation for the observed pattern that men are less likely to call back after sex if the sex takes place on the first date.

* This is not my theory.

When I was dating in the 1950s you were considered "fast" if you kissed before the 3rd date. Of course I was a white, middle-class, Roman Catholic, schoolboy and I had no idea what those outside my circle might have done or not done.

Having sex on a first date is tacky behavior regardless of the mind games about call backs or whatever.

For some reason, I was confused by these graphs, but I'm also really tired. I'll look at them again in the morning.

So traditional thinking says causality goes in the direction of "sleep with the guy--> no second date" but really it could be "guy doesn't want a second date for whatever reason--> higher chance of sex."

Why must it be the man who initiates the post-first-date contact?
Why assume that the woman always wants to be called back in the first place?
Why are we invoking feminism in a discussion that frames "dating" as, essentially, a man exchanging a few hours of attention and a certain amount of money for (eventual) sex?

Men who disrespect women for having sex on the first date (but who don't disrespect other men for doing the exact same thing) are hypocrites who aren't worth dating anyway. Why would any woman want to be called back by such a jerk?

I have sex with a guy when I feel like having sex and so does he. No correlation to "number of dates", etc.

Tesettur Giyim Trend | Does Sleeping With a Guy on the First Date Make Him Less Likely to Call Back? — March 6, 2014

Hold up...why are we still buying into the idea that MEN must do the calling?

If I sleep with someone in a time frame he considers inappropriate (yet also feels free to enjoy and engage in it himself, judgment free!), and that causes him to not call me back, I feel like I'm the real winner here. 1: I got laid. 2: A real misogynistic jerk who embraces double standards is not calling me.

it's all fake data guys... and therefore the theories aren't backed up...sooooowhy take it seriously?

If i was to find out of dates affected the call-back rate ask people who is still a couple, more than some of my friends are still with a person they slept with first time they meet (norwegians don't date, we meet and hang out, less formal), fewer waited until 7th date (or similar).

Also: maybe women who have sex on the first date don't actually want to be called back - talking to someone right after a one-night-stand can sometimes get kinda awkward. When to have sex and how long the relationship lasts is a mutual decision, not just entirely up to the man (as you've pointed out).

feminism is ruining society bcs man dont call girls that sleeps with them on first date, so often?:D isnt feminism something that can kinda prevent that?:P

I like your point and thought the same thing upon reading the title of the post. By the end, though, I was kind of hoping that this was a really elaborate setup for a pun.

Based on these charts I've learned that men will sleep with any woman that'll let them bang if the guy is into the girl. So if a girl wants to separate "guys who want a bang," from "guy who wants a relationship," she should make him take her out on 9 dates.

Why is this tagged "prejudice/discrimination?"

Even if men were less likely to call back after sex on the first date doesn't warrant for blaming women. If it's true, then what we need to do is teach men to see women as more than their body parts. To value women for something more than sex because they're much more than what goes in and out their vagina. That double standard is what's ruining society and feminism can help fix it.

Also as others have pointed out, these studies don't consider the fact that sometimes women just want to get laid too and the woman can call him, it doesn't have to be the man, especially if he initiated the first date.

[…] N. Cohen, sociology professor at the University of Maryland is shedding some light on why we may feel the way we do about the timing of sexual relationships. I’m sure plenty of […]

Dr. Phil, you are a Genius!

BTW, has your popularity with your male students suddenly increased 6 zillion percent?

Anyways, you have been inducted

Philip, while your posts are otherwise always my favorite on this blog, I think this is bull. I'll try the grindr example to explain it: Imagine there was no (or only one that was very difficult to access) grindr through which you can immediately have sex and cruising was somehow not possible (bear with me). The only grindr that is easy to access was one on which you'd have to meet and talk to the person without having sex a few times before you were allowed to have sex with them. Now WHICH grindr, the real world grindr, or the imagined grindr, would lead to more relationships?! THERE. THAT's all you need to know. Having sex on the first date is for a hetero or bi woman who wants a relationship with a man a LOOSING strategy: If she didn't, even those men who are (initially) only interested in her as a hole and not a possible partner may change their view once they have spent time with her. If she has sex with them on the first date, she eliminates even that possibility.

Answer: If so, he's a douche and you don't want to date him anyway.

7 Proven Reasons Why It’s Perfectly Okay To Have Sex On The First Date | Social Page — August 9, 2014

Reasons Why It’s Perfectly Okay To Have Sex On The First Date | MARKPENAVERDE.COM — August 15, 2014

hey people, I really in need to know, is'it bad to kiss him in the very first meeting? i mean, like knowing some one on the social net work like for a week, and when you meet him you kissed, and do something like little bit more, i'm confused so much, i don't know how he feels about me, and all he send to me is almost sexual stuff, so was it too soon to kiss him??? and how can i fix it??? is he only interested of getting to the next level because he wanna have much more than kisses?

[…] to each other, which determines how many dates they have, and whether the guy calls back.” —Philip N. Cohen, sociology professor at the University of […]

[…] to each other, which determines how many dates they have, and whether the guy calls back.” —Philip N. Cohen, sociology professor at the University of […]