The Baby Dolls of Mardi Gras

Prostitutes have often been at the forefront of challenges to gender conventions. Already at the fringes of “respectable society,” by choice or circumstance, these women often have less to lose than others.

The Mardi Gras Baby Dolls are an excellent example.  NPR’s Tina Antolini writes that the baby doll tradition began in 1912.  That year a group of African American sex workers dressed up like baby dolls and took to the streets to celebrate Mardi Gras. 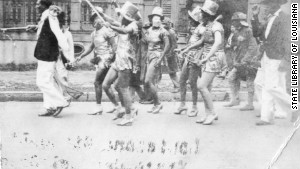 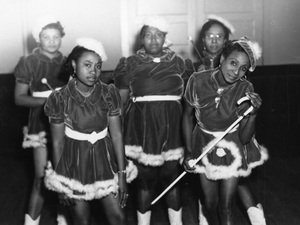 Calling your lover “baby” had just become part of the English language.  Meanwhile, actual baby dolls, the toy, were rare.  By dressing up this way, they flouted both gender and race rules.  Women were largely excluded from masking for Mardi Gras and African Americans were still living under Jim Crow.  Black women, by virtue of being both Black and female, were particularly devalued, sex workers ever more so.  Asserting themselves as baby dolls, then, was a way of arguing that they were worth something.

“[I]t had all that double meaning in it,” explains historian Kim Vaz, “because African-American women weren’t considered precious and doll-like.”

It was a bold thing to do and the Baby Dolls carried walking sticks with them to beat off those who accosted them.

Today, honoring those brave women that came before, the tradition lives on in a city with the richest and most creative and unique traditions I have ever encountered.  Happy Mardi Gras, Baby Dolls!  Have a wonderful day tomorrow!

For more, visit They Call Me Baby Doll.  Cross-posted at Pacific Standard.

"Black women, by virtue of being both Black and female, were particularly devalued, sex workers ever more so. Asserting themselves as baby dolls, then, was a way of arguing that they were worth something."

Were they subsequently able to charge more?

Interesting article. Although I can see where some might think it's controversial, it adds more to the rich and fascinating history regarding New Orleans' red light district. (Although I object to the foolish, politically correct euphemism "sex worker", which sounds so pretentious! When I was in the life, neither I nor other women who were prostitutes referred to ourselves by that silly, phony phrase! There was no shame in my game; I called myself a prostitute, a hooker, a hoe, as did the other chicks out on the track! Euphemisms are dumb. LOL!)