What Causes Inequality? Systemic and Individual Frames for Racism in Media

Sociologists who study inequality distinguish between individual bias, negative beliefs about a group held by individual persons, and systemic inequality, unequal outcomes built into our institutions that will produce inequality even in the absence of biased individuals.

A good example is K-12 education in the United States.  School funding is linked, in part, to the taxes collected in the neighborhood of each school.  So, schools in rich neighborhoods, populated by rich kids, have more money to spend per student than schools in poor neighborhoods.  This system privileges young people who win the birth lottery and are born into wealthier families, but it also benefits whites and some Asians, who have higher incomes and greater wealth, on average, than Latinos, African Americans, American Indians, and less advantaged Asian groups.

Now, teachers and school staff might be classist and racist, and that will make matters worse.  But even in the absence of such individuals, the laws that govern k-12 funding will ensure that rich and white children will be given a disproportionate amount of the resources we put towards educating the next generation.  That’s f’d up, by the way, in a society that tells itself it’s a meritocracy.

Sociologists who spend time in classrooms know that young people coming into college are much more familiar with the idea that individuals are biased than they are with the idea that our societies are designed to benefit some and hurt others.  This is a problem because, in the absence of an understanding that we need to change law, policy, and practice — in addition to changing minds — we will make limited headway in reducing unfair inequalities.

But where do people get their ideas about what causes inequality?

One source is the mass media and, thanks to Race Forward, we now have a portrait of media coverage of one type of inequality and the extent to which it addresses individual and systemic biases.  They measured the degree to which news and TV coverage of issues were systemically aware (discussing policies or practices that lead or have led to inequality) or systemically unaware (fails to discuss such policies, explicitly denies them, or refuses to acknowledge racism of any kind).

First, they found that news outlets varied in their systemic awareness, with MSNBC a clear stand out on one end and Fox News a clear stand out on the other. On average, about 2/3rds of all media coverage failed to have any discussion of systemic causes of inequality.  Articles or op-eds that robustly discussed policy problems or changes were extraordinarily rare, “never constitut[ing] more than 3.3% of any individual news outlet’s coverage of race…” 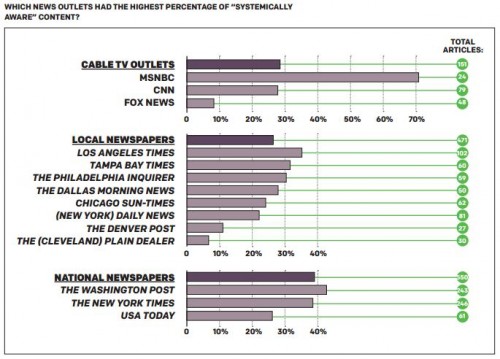 Second, they found that systemic awareness varied strongly by the topic of the coverage, with the economy and criminal justice most likely to receive systemically aware coverage: 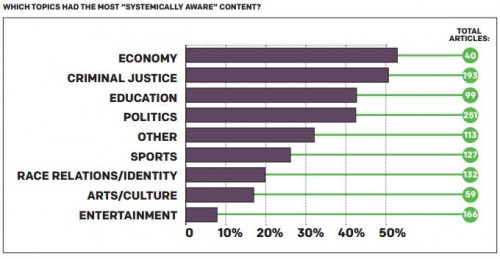 What this means is that whether any given person understands racism to be a largely one-on-one phenomenon that can be solved by reducing individual bias (or waiting for racists to move on to another realm) or a systemic problem that requires intervention at the level of our institutions, depends in part on what media outlets they consume and what they’re interested in (e.g., sports vs. economics).

There’s lots more to learn from the full document at Race Forward.

“WHAT CAUSES INEQUALITY? SYSTEMIC AND INDIVIDUAL FRAMES FOR RACISM IN MEDIA” (The Society Pages) | The Alternate — February 27, 2014

I believe a major source of inequality in America lies in the practice of pay-for-performance in the private sector. People who produce more and better work product are ultimately paid more, and over time the difference in pay is compounded, and inequality becomes increasingly evident.

The US is a very individualistic society. I'm constantly surprised at how unable Americans are to understand anything "systemic". The debate always devolves into what this person does and what happened to that person.

And yes, MSNBC is a clear exception. Especially Rachel Maddow. She is amazing in covering systems and context.

Is it truly racist, or "just" classist? Poor white kids don't make out much better.

When I was a student teacher at a junior high, I remember remarking to the principal how nice the school was compared to another on the "wrong" side of town.

I'll never forget her response... the town pours more money into our school because kids here grow up to be doctors, lawyers and scientists. Kids on the other side of town will never amount to anything anyway, so why spend money on them?

I'm glad I studied clinical sociology, rather than clinical psychology. That was a society I would rather change than fit into.

I hear this argument often; that school districts in richer neighborhoods are better able to educate their children due to increased funding.

Here in DC, the city spends an estimated $20-$24K per student, per year in the public school system (some of these funds come from the Federal budget). This is almost double the average tuition rate for private schools in the city. Yet despite double the resources, private high schools graduate 77% of students, whereas the public schools graduate 56%.

In Fairfax County, where I grew up, schools receive funding equal to $12K per student. 97% of students here not only graduate, but go on to attend college as well. I've yet to hear an explanation as to why funding is the key issue when some schools perform much better with fewer resources.

That’s f’d up, by the way, in a society that tells itself it’s a meritocracy.

Just pondering here, but sometimes I wonder if this is a big part of the philosophical divide. In general, things are pretty meritocratic (for a broad definition of merits) if you start counting at adulthood, but much less so if you start counting at birth. Regardless of whether it's fair that poor kids don't get to acquire as many skills in their formative years, once they reach adulthood things are largely defined by how skilled you are. So if they *are* highly skilled, they have opportunities to climb the ladder and do well. I'm a living example of that. But they have a significantly decreased likelihood of being so.

Interestingly enough, the increased meritocracy starts as soon as you start being expected to produce something for the market. As a child, our definition of merit is pretty much limited to "smart" and "hard working." As an adult, it's really "ability to produce -- or at least give the appearance of doing so."

if systemic inequality is actually functioning without any individually biased people, calling it 'racism' undermines that definitionally. Some will hear you say

1) there is inequality in schools, manifesting itself in racial disparity

and wonder how 1+2 = racism. Since for racism to exist, in the popular mind, you need someone bearing ill-will.

So that's one problem

another one is that certain kinds of systemic disparities, if they are not the result of ill-will on anyone's part, seem innocuous. (exception would be the material disparities of wealth and poverty, clearly.)

you could call that "systemic sexism" but, what if everyone is happy being a microbiologist or philosopher. What needs to change? Do we need interventions?

Systemic inequality is as difficult to measure as carbon emissions; because, we live on a carbon base planet and there are 7 billion humans on board. In the United States you have the union of states, each has counties, cities and townships. Their borders are overlap by the borders of political districts and a seventh district overlaps the other six call the Federal Reserve System. As a result, the mechanics of systemic inequality is highly calculative; because, each jurisdiction can manage and stop systemic inequality through how well the use their local authorities, how well voters turn out to polls, how the state handles funding, and where funding is coming from. Excellent leadership is the key to impacting the down full of systemic inequality. Likewise, the political arena is where the urgency of carbon emission can be solved.