Is Religion Secularizing? Trends in Opposition to Pornography

The term secularization is typically used to describe the process by which something becomes increasingly distant from, irrelevant to, or uninfluenced by religion.  But what about religions themselves?  Can religions undergo secularization?

Sociologist Jeremy Thomas tested this proposition, looking at changes in how authors writing for the popular magazine Christianity Today frame their opposition to the use of pornography between 1956 and 2010 (article, summary).  He compared three anti-pornography frames:

Thomas found that the last frame — harm to self — had increasing come to dominate the discussion at Christianity Today.  This figure shows the proportion of paragraphs that make each argument.  The last frame clearly dominates. 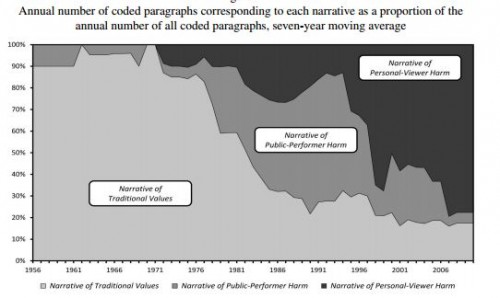 Thomas calls this “outsourcing moral authority”: religious leaders are relying on other authorities to back up their points of view.  This suggests that even religion is undergoing secularization.

[…] Images (well worth following, by the way) has just posted this fascinating piece on changes in Christian discourse in opposition to […]

[…] Is Religion Secularizing? Trends in Opposition to Pornography — I’m not sure this has any great significance, but it is interesting. […]

I read these results differently. First, don't confuse a magazine with the religion in general; they're different, obviously, and one can't serve as a surrogate for the other. Second, it's likely that the writers of the magazine are simply trying to address an audience that is far less influenced by religious tenets and fears then audiences were 50 years ago and more influenced by popular critiques on THIS ONE ISSUE, pornography. Finally, I doubt anti-pornography was ever much of a theme in popular Catholicism from the beginning. Don't confuse old-time-religion with what was happening centuries ago.

There are many problems with the western religions that cannot be fixed. They will die off eventually, after they take a last gasp at relevance. But they will hold on to their core, supernatural beliefs until the end.

I'm a little bit skeptical about the idea that all arguments against pornography that don't boil down to "it's a sin and against the bible," full stop, must be totally secular. It seems to me that many religions, including Christianity, have historically mixed arguments about social and personal good with arguments about religious authority to get their point across. For instance, while I can't comment on the specific arguments in Christianity Today, since they aren't quoted directly here, it seems probable that a Christian theory of pornography as self-harm would stem from the idea that the body is a temple, created by God, etc, and it's an individual's responsibility to keep it pure. And that's a very religious idea, even if some of its offshoots (don't look at porn because it will depress you/make you a worse person/negatively affect your marriage) seem less obviously tied to religion.

I would not call this "secularization". I would call this a move away from authoritarianism and towards logical arguments. It seems to me to be a natural consequence of the increasing education and literacy of the general population. That doesn't make it a secular argument, just one that doesn't rely on arguments like "the bible says so". Particularly since the bible does not mention pornography.

I don't see what's happening now as evidence that religions (let's say specifically Christianity, since no other religion is represented here) are becoming more secular within their own ranks. Rather, religious ideology has to interact more and more frequently with a secular stream of consciousness, and assert the supposed relevance of their moral positions with something meatier than "God said so."

If anything, this blog post is a great example of how religious dogma can be mistaken for secularity when viewed through the lens of ideological dogma.

The assumption that this is a shift from deontological ethics to consequentialist ethics is not necessarily justified: it could mark a shift to virtue ethics.

This seems to reflect the increasing trend towards "plug-in thinking", as opposed to hand-crafted (or should we say head-crafted?) thinking, that we see in other areas of life - politics being the prominent example.

[…] If any of you are feeling like over achievers today I would suggest this essay. Follow it up by the post ”Is Religion Secularizing” that came out this […]

Harm to self is increasingly dominating discussion in this Christian magazine because certain Christian people want to find ways to judge other people. They don't really care about whether someone harms themselves or not. If they don't
like something about you they'll feel justified in being mean to you by saying
you're harming yourself.

St Paul: "Flee fornication. Every sin that a man doeth is without the body; but he that committeth fornication sinneth against his own body." - King James version

so, is it outsourcing to focus on harm to self? or radical resourcement?

i wonder what happened in the early 70's that, apparently, gave start to the idea that watching pornography would be bad for the viewer.

IS RELIGION SECULARIZING? TRENDS IN OPPOSITION TO PORNOGRAPHY | Welcome to the Doctor's Office — March 9, 2014