Michael Dunn shot ten bullets into a car filled with four teenagers after a dispute over the volume of their music.  He claimed self-defense, though the gun he said he saw was never corroborated by anyone or found.  This weekend he was found guilty of attempting to kill the three teenagers who survived, but not of murdering the one he shot dead, 17-year-old Jordan Davis.

When George Zimmerman was acquitted of the murder of Trayvon Martin, I put up a post reviewing a study on stand your ground laws.  The research found that these laws increase the likelihood that a homicide will be considered “justified,” but only in cases where a white person is accused of killing a black person.  Here is the data: 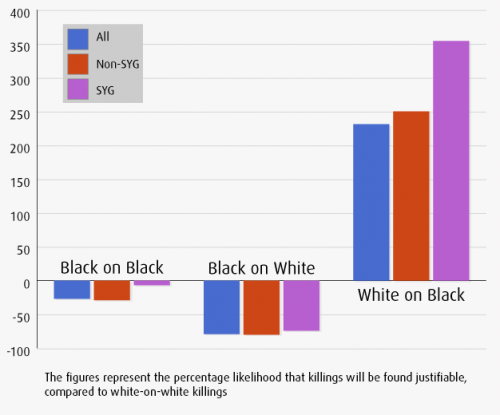 At the previous post, I argued that these data — made to feel real by decisions like these — show that we are “biased in favor of the white defendant and against the black victim.” Stand your ground laws make it worse, but the far right column shows that:

Or, to put it more bluntly, we still value white men’s freedoms more than black men’s lives. On average, of course.

I don't disagree, but if I show this to my students they are going to ask why is the white on white column omitted?

Nevermind, I see the X axis is the baseline of white on white murders.

White on white is not a column, it's the 0 line because everything else is a comparison to that. Still would like to see how murder rate skewed the data, tho I assume she accounted for that. Also would like to see this cha rt redrawn without gang related murders...in other words this data could represent the actual truth and not at all represent bias. It's a complex issue that may not distill down into one graph....

This is not really valid because it does not control for whether the shooting was in fact justfied, i.e. was the shooter justified in fearing harm from the person that was shot.

"Or, to put it more bluntly, we still value white men’s freedoms more than black men’s lives. On average, of course."

Where exactly does gender come into this? The data shown here don't appear to differentiate by gender, and therefore should also include cases in which the killer or victim is female. And indeed, some of the most famous cases involving SYG have involved black women - including the conviction of Marissa Alexander, who is black, over a non-lethal warning shot to an abusive husband, and the killing of Renisha McBride by a white man at whose doorstep she was asking for help.

Just hypothetically speaking. Couldn't a part of the reason why black (on both black and white) killings are more often found justifiable be, that they are on average involved in different kinds of incidents. Resulting from the still strongly divided social milieus and positions. Or that there's a bias against a certain social-economic milieu or even class bias which strongly influences this (besides the already mentioned gender bias)?
Not denying the relevance of the findings but there's definitely more to this than just blunt racism.

The correct conclusion to draw is that black men in the USA are more violent than white men in the USA on average. The appropriate questions to ask are "Why is this the case?" and "What can be done about it?" To try and create some argument about jury bias or judicial bias without also evaluating racial profile of the jury and judiciary is ridiculous. It is entirely possible that racial discrimination is at the root of why black men in the USA are more violent but to try and pretend like they are not is silly.

[…] White Men’s Freedoms and Black Men’s Lives — The research found that [Stand Your Ground] laws increase the likelihood that a homicide will be considered “justified,” but only in cases where a white person is accused of killing a black person. […]

Negative percentages? Do you know how to statistics?

This graph is BAD. The data is interesting, but the presentation is horrible.

By using percent variation you get a scale that goes from -100 to infinity, because when you use percentage-offset then if something is 3 times the base it becomes 300 while if it's 1/3 the baseline then it becomes 33.

But if we're concerned with relative differences, then that makes no sense at all -- deviations UP will look much bigger than deviations DOWN.

There's an underlying assumption that the criminal justice system is about truth and fairness, but that's never been the way it worked. I think the best you can hope for is to have some locals who couldn't get out of jury duty pay attention to someone who is actually advocating on your behalf.

I encourage those interested in these numbers to attend some trials and watch the jury members. It'll be an eye opener for you.

On black vs. white, the results and the headline are a dog bites man piece. I'm going to say America needs another 50-100 years before these numbers change. The backstory is too much of a nightmare to shed this quickly.

[…] To hear more this data and see the infographics, visit the article here. […]

ok, so the graph is showing the percentage likelihood in comparison to
white-on-white violence, so since the values are >100% and negative in some cases, i'm assuming they did ([black-on-black] - [white-on-white])/[white-on-white]

so, it looks like stand your ground laws increase the
likelihood of justification of the killing in the categories presented,
but more so in white-on-black killings

I HOPE THAT WHENEVER YOU POST YOUR PRIMARY OBJECTIVE IS TO OVERTHROW OUR WHITE SUPREMACIST CULTURE. THAT'S OUR JOB.

"Roman considered any state with a broad self-defense law to be a “Stand Your Ground” state, although states have passed different variations of the law and some states didn’t enforce the laws until the end of 2009."

That seems somewhat meaningless then.

its
not right on either side, that is not my point but the fact is we as a
country are scared to death to accuse the black man is, that was
apparent when obama took office. The media was on egg shells to call him
out on anything for fear of being a racist..

What if whites are acquitted at a higher rate because they are more likely to be prosecuted on shaky facts? I don't know if Zimmerman is counted as "white" but it's a great example of horrible facts for the prosecution, yet the case went to trial anyway after racial pressure was brought on the government.

Anyone who finds this blurb owes it to themselves to read the Frontline article behind the data (click on the data hyperlink) which does a much better job of defining what the data accounts for and what is missing. Their interpretation is much more even-handed. What is posted here is an over simplification of what was studied and modeled. This is a very complex and important issue. This post doesn't do it justice. I do thank the original poster for bringing it to my attention, but want to encourage everyone to dig in deeper.

[…] the hung jury on the murder charge against Michael Dunn for the killing of Jordan Davis, Wade reproduced the attached figure with additional commentary. While there are some legitimate complaints about […]

I'm probably missing something, but it looks like the White on Black group might be messed up in some way. How can "All," which is presumably the average of SYG and non-SYG, be lower than either SYG or non-SYG? Shouldn't it have to come out in the middle somewhere?