A popular quote urges us to shoot for the moon: even if we miss, it tells us, we’ll land among the stars. According to new research, there’s more to it than cheesy inspiration. Using data from two waves of the National Longitudinal Survey of Youth, sociologist John Reynolds and Chardie Baird test the common notion that failing to attain as much education as expected is associated with symptoms of depression in early/middle adulthood.

First, their results show that individuals with lower levels of education are more likely to exhibit signs of depression. 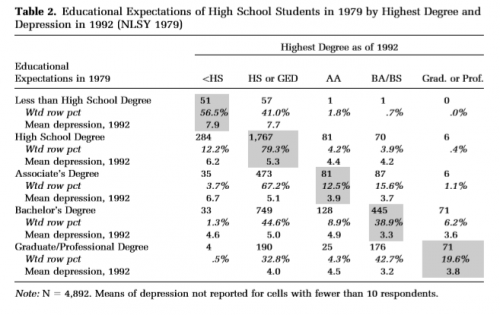 But, further statistical wrangling shows that their depression doesn’t come from the gap between plans and achievement. It comes from the low level of educational attainment in itself.

Reynolds and Baird conclude that there are no long-term emotional costs to aiming high and falling short when it comes to educational aspirations. This contradicts decades of research that holds that unmet educational expectations lead to psychological distress. In fact, not trying is the only way to ensure lower levels of education and increased chances of poor mental health. So, go ahead and shoot for that moon.

Hollie Nyseth Brehm is a Ph.D. Candidate at the University of Minnesota.  She is the graduate editor of The Society Pages.  This post originally appeared at Contexts Discoveries.

I always hated that quote for the complete ignorance it shows of astronomy.

But what if it is depression that leads to increased chances of dropping out? Then one thing feeds on the other, but depression was already there.

I'm wondering if 99% of the world was depressed prior to the twentieth century.

Of course, this is a study of students in a time where student debt dwarfs that of which current students have to bear. I imagine the playing field would be increasingly more level these days.

DOES STYMIED EDUCATIONAL ATTAINMENT LEAD TO DEPRESSION? | Welcome to the Doctor's Office — March 9, 2014