Republicans, Democrats, and Trust in the Government

A survey question is only as good as its choices. Sometimes an important choice has been left off the menu.  I was Gallup polled once, long ago. I’ve always felt that they didn’t get my real opinion.

“What’d they ask?” said my brother when I mentioned it to him.

“You know, they asked whether I approved of the way the President was doing his job.”  Nixon – this was in 1969.
“What’d you say?”

“I said I disapproved of his entire existential being.”

I was exaggerating my opinion, and I didn’t actually say that to the pollster.  But even if I had, my opinion would have been coded as “disapprove.”

For many years the American National Election Study has asked:

How much of the time do you think you can trust the government in Washington to do what is right – just about always, most of the time or only some of the time?

The trouble with these choices at that they exclude the truly disaffected. The worst you can say about the federal government is that it can be trusted “only some of the time.”  A few ornery souls say they don’t trust the federal at all. But because that view is a write-in candidate, it usually gets only one or two percent of the vote.

This year the study included “never” in the options read to respondents.  Putting “no-way, no-how” right there on the ballot makes a big difference. And as you’d expect, there were party differences: 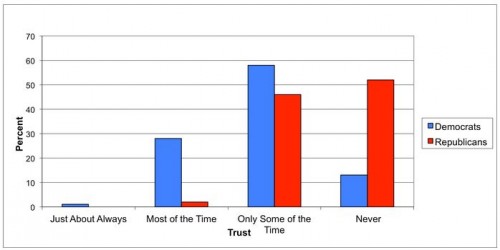 Over half of Republicans say that the federal government can NEVER be trusted.

The graph appears in this Monkey Cage post by Marc Hetherington and Thomas Rudolph. Of course, some of those “never” Republicans don’t really mean “never ever.”  If a Republican becomes president, they’ll become more trusting, and the “never-trust” Democrat tide will rise.  Here’s the Hetherington-Rudolph graph tracking changes in the percent of people who do trust Washington during different administrations. 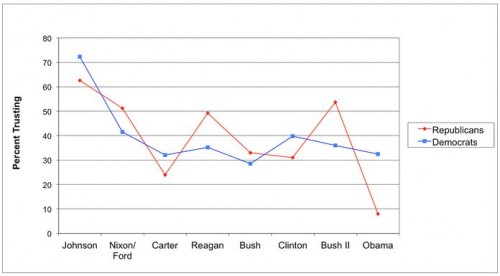 This one seems to show three things:

Reminds me of the story of 2 priests arguing about the appropriateness of smoking and praying concurrently. They decide to poll their respective rectors and regroup. When they do the 1st priest is surprised they're still in disagreement.

Your problem is this said the 2nd priest: You asked "Is it OK if I smoke while I am praying. I asked if I can pray while I am smoking."

Is the dislike among republicans for Obama race related?

"A survey question is only as good as its choices."

This is quite the leap, and misleading as well. There is a more detailed graph on the linked Monkey Cage article. It shows rapidly declining Republican faith in government that extends into the Bush years:

The graph begins in 2002, but presumably trust peaked in 2001, after the 9/11 attacks, when George Bush had 90% job approval. But no matter, draw whatever conclusion makes you feel better.

While Republicans "never" trust the government, they seem perfectly
happy when the government incarcerates millions of Americans, invades
and bombs foreign countries, dictates reproductive rights to women,
decides where and where not someone can build a mosque...

[…] Republicans, Democrats, and Trust in the Government […]

I also think the phrasing of this question is key. If you asked me "How much of the time do you think the government does the right thing?" I'd probably say "Sometimes." But if you ask me if I TRUST them: Of course not! Trust is a really profound feeling. You could ask me if I think a guy on the street does the right thing, and I'd say, I guess, sometimes. But do I trust him? Not if I don't know him.

Plus "trust" seems pretty binary to me-- you trust someone or you don't trust them. It's hard to say you "trust" someone sometimes, unless you're talking about specific issues, i.e. "I trust my friend not to tell my secrets, but I don't trust her to take care of my cat." In short, I think "trust" is a loaded word. And I think having two polls-- one with "trust" and one with "do you think" or something like that-- would yield enlightening results.

Here's my favorite biased poll question. It was an auto-respond poll (no real person on the other end of the line) delivered to my cell phone on behalf of a local church.

The question was: "Do you think [local church] is doing enough to combat the gay agenda?"

Tesettur Giyim Trend | Can the United States Government Ever Be Trusted? — February 19, 2014