Opinions on Economic Inequality Driven by Ideology, not Income

A majority of both Democrats and Republicans believe that economic inequality in the U.S. has grown, but they disagree as to its causes and the best solutions, according to a new survey from the Pew Research Center.  While 61% of Republicans and 68% of Democrats say inequality has widened, only 45% of Republicans say that the government should do something about it, compared to 90% of Democrats.  A study using the General Social Survey has confirmed the findings. 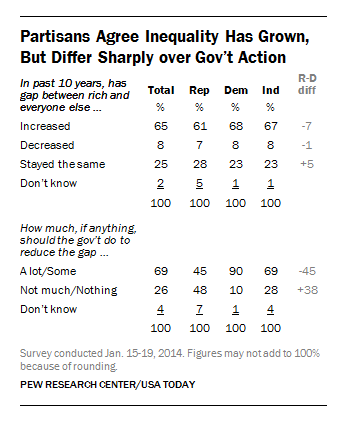 Republicans and Democrats also disagree about what the best interventions would be.  At least three-quarters of Democrats favor taxes on the wealthy and programs for the poor, but 65% of Republicans think that helping the poor does more harm than good. 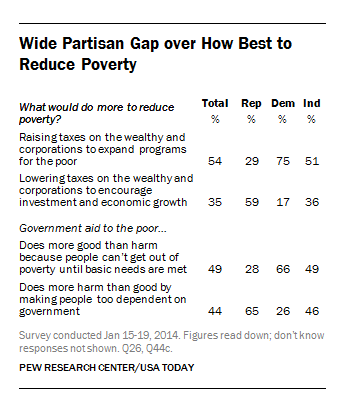 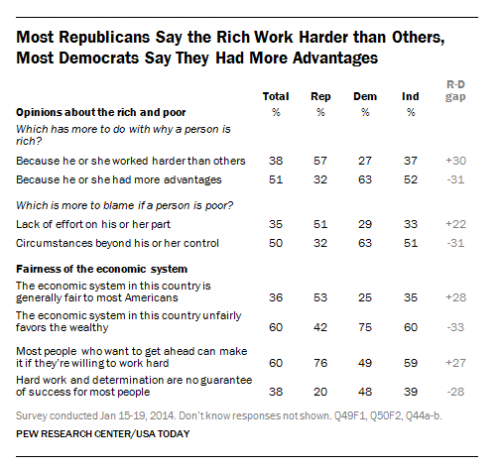 Interestingly, answers to these questions vary much more by political affiliation than social class.  Using data from the survey, I put together this table comparing the number of percentage points that separated the average answers to various questions.  On the left is the difference by political party and, on the right, income (click to enlarge). 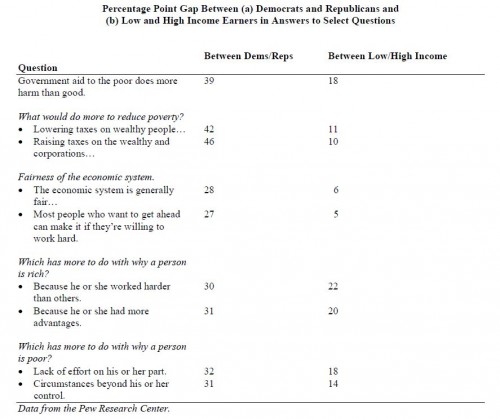 Clearly political affiliation drives opinions on the explanation for and right solutions to income inequality more so than income itself.

This is a great example of hegemony.  A hegemonic ideology is one that is widely supported, even by people who are clearly disadvantaged by it.  In this case, whatever you think of our economic system, it is pretty stunning that only there is only a six point gap between the percent of high income people saying it’s fair and the percent of low income people saying so.  That’s the power of ideology — in this case, political affiliation — to shape our view of the world, even going so far as to influence people to believe in and perhaps vote for policies that are not in their best interest.

I'll add that all the standard measures of inequality are taken BEFORE the existing government programs are accounted for. Presumably, these programs work, and true inequality isn't widening (if they're not working, end them now).

Read William G. Sumner's "What The Social Classes Owe Each Other"

Clearly political affiliation drives opinions on the explanation for and right solutions to income inequality more so than income itself.

Or, it could be that opinions on the explanation for and right solutions to income inequality drive political affiliation more than income itself.

being raised ex-catholic, I kinda only just found out predestination. and maybe I misunderstand, but do those religions that believe in that maybe think poor people are just already doomed to hell and their wealth and success is god showing them that they are righteous?

Ideology is certainly a key driver - almost by definition. But I would be cautious about making too much of the absence of a linkage between income and attitudes in this survey.

Income can be a highly unreliable item in a survey - and it usually has a very high non-response rate. In the financial studies, I have done with cross-checking against third party data, I have found that low income people exaggerate their income and wealthy people - especially retirees - will minimize it. Unless you have major controls in the responses on the income question can be extremely misleading.

Moreover, income is not the most reliable indicator of assets, which is the measure of wealth that really matters. Mitt Romney, Michael Bloomberg, Mark Zuckerberg, Sergey Brin, Larry, Page, Eric Schmidt, Larry Ellison, Elon Musk, Richard Kinder and Meg Whitman and Darren Entwhistle pay themselves just $1 per year.
By that standard, each one of these 1er% are poorer than my neighbour's six year old.

The implication here is that people without strong financial resources mindlessly follow GOP party doctrine. I don't agree. I'm not a supporter of the GOP, or the Democratics for that matter, but I find it likely that people of varying economic means would be drawn to themes around individualism in this country.

Also, it appears unlikely that intelligent people first identify with a political party and then adopt political beliefs of the party. They may be susceptible to party sound bites on topics that they don't have time to focus on, but most of us think about the critical issues ourselves.

[…] Obama announces plans to raise the minimum wage for federal contractors reigniting a debate on the effect of minimum wages on economic performance. This debate is as old as Das Kapital @NewYorker. But today, your opinion on inequality might have more to do with party affiliation than anything else @SocImages […]

It'd be interesting to see how high income/low income are defined. I also agree that wealth would be an even better variable to use, as another commenter suggests.

Tesettur Giyim Trend | We All Know That Inequality Is Growing, but What Should We Do About It? — February 17, 2014

OPINIONS ON ECONOMIC INEQUALITY DRIVEN BY IDEOLOGY, NOT INCOME | Welcome to the Doctor's Office — March 9, 2014

We All Know Inequality Is Growing, but What Should We Do About It? - Pacific Standard: The Science of Society — March 25, 2014