The Rise of the Jew-ish

The Pew Research Center has released the data from new survey of religious and non-religious Jews.  They find that almost a quarter of Jews (22%) describe themselves as being “atheist,” “agnostic,” or “nothing in particular.”  The percentage of Jews of no religion correlates with age, such that younger generations are much more likely to be unaffiliated.  Nearly a third of Millennials with Jewish ancestry say they have no religion (32%), compared to 19% of Boomers and 7% of the Greatest Generation.

A majority of Jews with no religion marry non-Jews (79%); 67% have decided against raising their children with the religion. 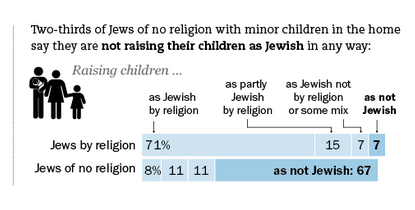 As a result of intermarriage, the percent of all Jews who have only one Jewish parent is rising.  While 92% of people born between 1914 and 1927 had two Jewish parents, Millennials are as likely as not to have just had one.

Another absolutely wonderful thing about America is the fact that kids stopped carrying their folks' baggage sooner than anyone thought possible. This is the sheer power of diversity at work; it's exhilarating; it's accelerating; and it's another reason no one alive today will live to see America become #2. The apple falls pretty far from the tree in these parts...

We are all blessed with the fact that intermarriage is threatening religions like nothing else. The major western religions lave long since forsaken any claim of leadership for the future on this planet by perpetuating in-group/out-group thinking (Can you say "chosen people"? Do you have an exclusive on getting into heaven? Does you god give you a license to maim?). The sooner this ancient, horrific phenomena is snuffed the better.

I find it heartening that in the end it will be love that conquers evil, as intermarriage lays waste to those who would kill in the name of a god.

Of course, some of this is misleading, since younger Jews have always been less affiliated than older ones. Just like the boomers and the x'ers, many Jews with no religion will have kids and realize that they want them to know something about Judaism, join a synagogue, and gradually become at least somewhat religious. Happened to my mother. Grew up Conservative, became completely a-religious in her twenties, married a non-Jew, then had kids. Joined a synagogue, started going to services regularly, joined the ritual committee. Not saying that this will happen to everyone, but certainly some of the non-religious millennials will do the same thing when they are settling down and looking for a community.

A lot of the language in this article is a little confusing....I mean, in context yes it all makes sense, but (honestly, as someone who grew up jewish and became a-religious) the fact that it took four sentences of statistics to clarify that by "Jews of no religion" you meant "people with Jewish ancestry who have no religion' is very muddying.

Does this study make a distinction between people who describe themselves as "atheist Jews," "former Jews, current Atheists" or "jewish ancestry, no religion"? Because as one of the middle, I find it frustratingly necessary to draw a distinction. I am not jewish just because my grandparents were, or because my mother is, or because I once was. If I were interviewed for this and classified as a Jew, I would be misrepresented.

Many have commented about the confusing language in this article and to some extent the survey in general- I'm also unsure of how to interpret each question, but it seems interesting that nearly 20% of non-religious Jews choose to raise their children as somewhat religious.

This could be the result of confusing terminology (When I participate in a religious holiday with family, I' still consider myself non-religious... if I teach my kids about the holiday and they participate in it, is it a 'somewhat religious' upbringing for them?) v. indicating a change towards religious participation while parenting. It would be interesting to know if 20% of non religious people were raising their kids as religious in a way different than their own religious identity (i.e. raising kids to be religious despite being an atheist, agnostic, etc).

Israel and Jew or Jewish, all derived from the Bible. I guess some folks just don't know their history. How sad.