Richard Sherman Responds to Being Called a “Thug”

Immediately after the Seattle Seahawks beat the San Francisco 49ers on Sunday, Richard Sherman gave an intense, boastful post-game interview.  This triggered the always-present racism, as illustrated by many tweets that followed.  Here is just a sample from Public Shaming: 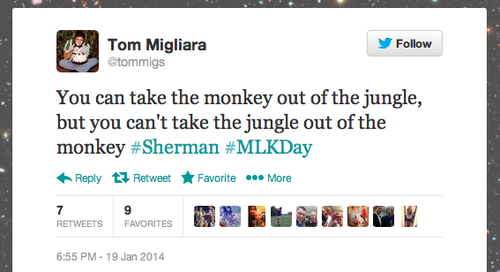 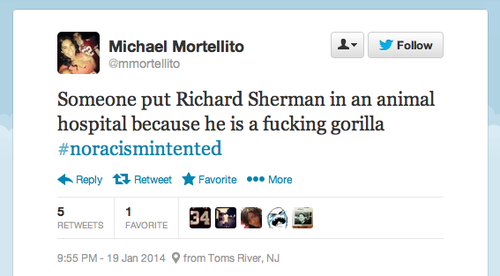 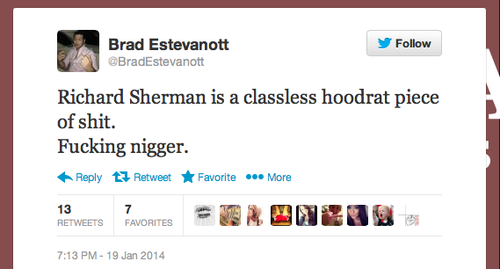 These are obviously cruel and full of hate, but the ones in which he was called a “thug” got somewhat less attention:

In interviews about the racist response, Sherman made some really nice points about what this means about the state of America and the specifically racial insults.  In a press conference, for example, asked about being called a “thug,” he argued that it’s just “the accepted way of calling someone the n-word these days.”  He points out that, in no way was what he was doing thug-like:

Maybe I’m talking loudly, and doing something… talking like I’m not supposed to, but I’m not… there’s a hockey game where they didn’t even play hockey, they just threw the puck aside and started fighting.  I saw that and I said, “Aw man, I’m the thug? What!? What’s going on here?”

In another video, he expands on this point, saying: “I’m not out there beating on people, or committing crimes, or getting arrested, or doing anything; I’m playing a football game at a high level and I got excited.”

Sherman’s making two points.  First, that there was nothing thug-like about his behavior.  Thugs are violent criminals.  He’s just playing a game.  And, second, the term is decidedly racial, applied to him largely because of the color of his skin.  Meanwhile, hockey players, who are overwhelmingly white, as well as other white athletes, don’t as often get these sorts of labels even if they are physically violent in ways that exceed the demands of their sport.

I think the word is used differently in the UK. To me a thug is a white fella.

In my youth (1950s) a "thug" was just another word to describe a violent criminal.

The juxtaposition of the open racism with the cryptoracism is nice, thanks.

By contrast, hockey players who skirt the rules in the midst of game play are valorized as "enforcers" and when they engage in full on fighting, they're called "brawlers." Thug definitely never enters into it.

The NFL is full of black athletes, but only Sherman is being called a thug. I don't think I've ever heard his quarterback called one... dude just takes of his business.

Do we have any examples of white athletes being called thugs or being criticized for this kind of over-the-top trash talking?

I look at this a bit differently. From my perspective, modern sports has become a completely unique entertainment vehicle, far beyond what the same sports were as little as 20 years ago. The money in all this today is wild.

In order to keep revenues growing it benefits all those in the business to stay in the news. And manufactured controversy is the cheapest way to attract the attention of today's "journalists".

Sherman is no more a thug than the owners are. He has a short leach to run in and gets to write his own scripts in that space to fan the flames. In the end, they're laughing all the way to the bank as we continue to hype their latest doings.

We are in a sense unwitting contributors to their business strategy charade.

I bet anyone who's actually competed in an important sports event against a big rival, and won, could identify with Sherman in the moment like that. Like he said, he can't be focusing on being charismatic and articulate when he's on the field. He did his job effectively. All the haters are the ones who sat at home and judged him. People are overreacting and showing their true colors.

He's not a thug, but he is an ass. Each sport has its own conventions, and in pro football you don't call out another player by name. That show a lack of class and poor sportsmanship.

Hockey is a different sport - brawlers don't get called thugs because they get the hockey-unique label "goons." But again, different conventions. Hockey fans bang on the glass and throw hats and octopuses on the ice. Golf spectators, by contrast, can't make a peep during any of the action.

I don't think thug is the new N-Word. Thug is associated with violence or crime - and I tend to think the the N-Word suggests ignorance or inferiority. I do think it gets used more often to describe blacks, but plenty of people called Aaron Hernandez a thug for his behavior.

[…] gave a brief post-game interview in which he yelled at the camera, and the internet’s head exploded, and much of the yucky brain matter splattering around was ridiculously […]