Athletics and the Political Ambitions of Young Adults

In a comprehensive analysis of young men’s and women’s aspirations to public office, Jennifer Lawless and Richard Fox discover that part of the reason we see so few female politicians is because women just aren’t interested in running.  There are lots of reasons for this.  A absence of role models, a lack of encouragement from their parents, and the intimidating role that sexist attacks play in media coverage of campaigns.

But Lawless and Fox discovered another interesting correlation, one between political aspiration and sports.  More men than women — 74% compared to 41% — played on a college or intramural team and, for both, playing sports was correlated with political aspirations.  The figure shows that running for office had “crossed the minds: of 44% of women who played sports and 35% who hadn’t.  The numbers for men were 63% and 55% respectively. 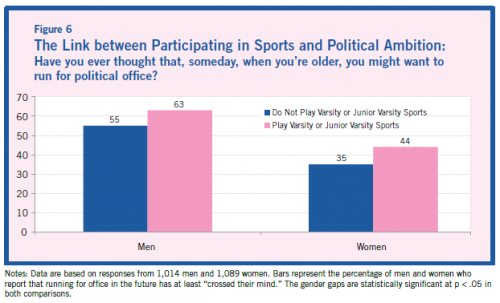 The authors suggest that the mediating factor is “an opportunity to develop… a competitive spirit.”  Sports, they argue, may build or reinforce the tendency to find pleasure in competition, which may make politics more appealing.

While sports increased both men’s and women’s interest in politics, it had a greater effect for women, shrinking the gender gap in political ambition by half.

Unexpected, but it makes sense!

Or... competitive types of people are drawn to competitions, like sports and elections.

I wouldn't read too much into these correlations that seem to pop out of nowhere and surprise the researcher. Form a theory and test it from a few different angles first. My 2 cents.

Another bit of speculation - if there is causation here, could it be that women who play sports are spending more time in a single sex environment, experiencing competition outside of the normal gender hierarchy, and that this has given them more confidence?

Didn't reduce the gap by half - just by one percentage point by those numbers.

[…] via Athletics and the Political Ambitions of Young Adults » Sociological Images. […]

I can't help but feel my stomach turn a little to think that people are drawn to politics because it's "competitive". Is that really what ppl go into politics for?

[…] Finally, Sociological Images talks about Athletics and the Political Ambitions of Young Adults: […]

Are Women Just Not Interested in Running for Political Office? - Pacific Standard: The Science of Society — March 25, 2014