New survey data shows that the average person overestimates the diversity of the American population, both now and in the future.  Today, for example, racial minorities make up 37% of the population, but the average guess was 49%. 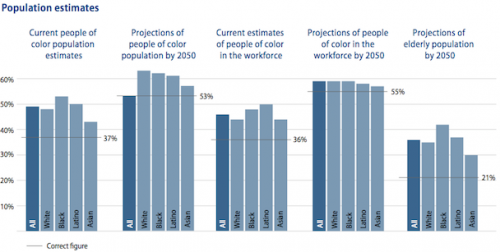 Many Americans fear rising diversity.  Over half worry that more minorities means fewer jobs, nearly half think that it means more crime, and almost two-thirds think these groups strain social services.  If people think that minorities are bad for America and overestimate their prevalence, they may be more likely to support draconian and punishing policy designed to minimize their numbers or mitigate the consequences they are believed to bring.

Not all Americans, of course, fear diversity equally.  Below are the scores of various groups on an “openness to diversity” measure with a range of 0-160. 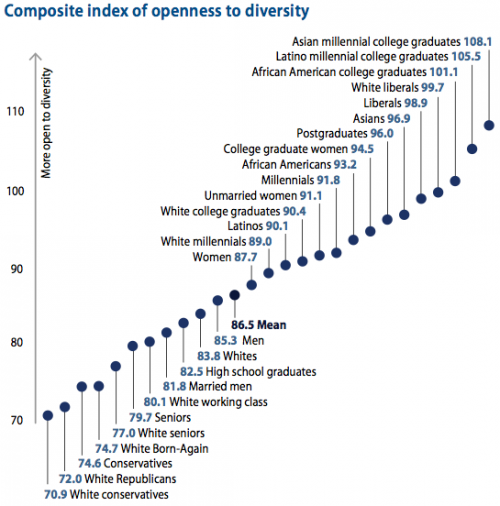 For the future, Americans are still strongly divided as to what to do about diversity and the racialized inequality we currently see.

Via The Atlantic; thanks to @_ettey for the link.  Cross-posted at Pacific Standard.

In the second graph, why is it "Married Men" and "Men" but "UNmarried Women" and "Women"? Looks a little sexist to me.

That first graph is all messed up, visually. I'm guessing that some (but not all) bars are supposed to be subsets of other bars within the same set, the percentage measurement is a dynamically changing thing, and the "correct figure" line has little relation to most of the bars that it crosses.

Something looks wrong with the bar for "all" for the 2nd bar chart, on population projections - unless "all" means something other than "all 4 racial groups" it shouldn't be lower than the 4 groups that "all" comprises.

It just seems one encounters fewer and fewer 'white' people in major metropolitan areas, so I can see how this finding can come about.

Serious, white flight takes people to the crappy valley areas and desert regions in Southern california, I wonder how it is other places...

So people are the *worst* at correctly guessing the projected number of elderly people, and better at guessing race, current or projected. What does that mean then?

Let’s not forget the fact that America is the great assimilator. Sure we should push it harder but on a relative basis—a point of departure which seems to get lost in the sauce too often here—we’re very good.

That said, Americans who desire the power and constancy of purpose we strive for today should not fear diversity but embrace it. What should be feared is a stagnant or declining work ethic coupled with a relative decline in educational achievement. Immigration reform can easily address both and inject this country with the kind of cultural jolt that made it so exciting in the first place.

Call me parochial and I'll admit my biases, but I'd love America to start looking and acting a bit more like New York City...which I believe is the most diverse place on the planet, and successful on many fronts because of it.

Should we criticize the media or people’s approach to media for the issues with race in today’s society? | racegroup2 — June 16, 2015

the ones who want in, are more for the "diversity", of course. it means they get in to a place they imagine is better than their own, whether it really is or not.