Why Women Have So Many Clothes

@bfwriter tweeted us a link to a college design student’s photograph that has gone viral.  Rosea Lake posted the image to her tumblr and it struck a chord. 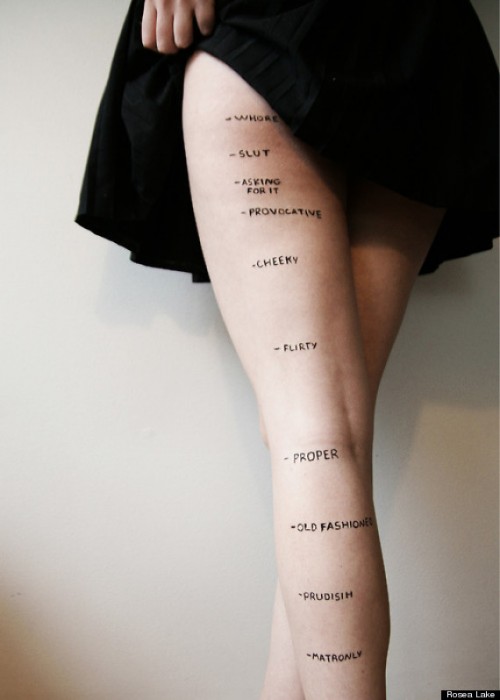 What I like about the image is the way it very clearly illustrates two things.  First, it reveals that doing femininity doesn’t mean obeying a single, simple rule. Instead, it’s about occupying and traveling within a certain space.  In this case, usually between “proper” and “flirty.”  Women have to constantly figure out where in that space they’re supposed to be.  Too flirty at work mean’s you won’t be taken seriously; too proper at the bar and you’re invisible.  Under the right circumstances (e.g., Halloween, a funeral), you can do “cheeky” or “old fashioned.”

The second thing I like about this image is the way it shows that there is a significant price to pay for getting it wrong.  It’s not just a faux pas.  Once you’re “‘asking for it,” you could be a target. And, once you’re reached “prudish,” you’ve become socially irrelevant.  Both violence and social marginalization are serious consequences.

And, of course, all women are going to get it wrong sometimes because the boundaries are moving targets and in the eye of the beholder. What’s cheeky in one setting or to one person is flirty in or to another.  So women constantly risk getting it wrong, or getting it wrong to someone.  So the consequences are always floating out there, worrying us, and sending us to the mall.

Indeed, this is why women have so many clothes!  We need an all-purpose black skirt that does old fashioned, another one to do proper, and a third to do flirty… at the very least… and all in casual, business, and formal.   And we need heels to go with each (stilettos = provocative, high heels = flirty, low heels  = proper, etc, plus we need flats for the picnics and beach weddings etc).  And we need pants that are hemmed to the right length for each of these pairs of shoes.  You can’t wear black shoes with navy pants, so you’ll need to double up on all these things if you want any variety in your wardrobe. I could go on, but you get the picture.

Women’s closets are often mocked as a form of self-indulgence, shop-a-holicism, or narcissism.  But this isn’t fair.  Instead, if a woman is class-privileged enough, they reflect an (often unarticulated) understanding of just how complicated the rules are.  If they’re not class-privileged enough, they can’t follow the rules and are punished for being, for example, “trashy” or “unprofessional.”  It’s a difficult job that we impose on women and we’re all too often damned-if-we-do and damned-if-we-don’t.

Cross-posted at Business Insider and The Huffington Post; view the original.

The woman in the picture is flirty to the point of near-cheekiness.

This Image Shows Why Women Have So Many Clothes – Business Insider | Camera Deal — December 31, 2013

Nothing stopping women from wearing, like, pants or something.

This Image Shows Why Women Have So Many Clothes | BaciNews — December 31, 2013

Although it's a bit dramatic and generalized, the gist is well taken re: skirt length and related revelations in women's designs. It is hard for women to escape having their outfits assessed on dimensions of sexual provocation. And the judges they dress for are just as likely to be other women as any man.

I'm not sure the explanation holds however for owners of 20 pairs of jeans that essentially fit the same and vary mostly on shade of blue and appearant age. Or those shoe collections? Or the jewelry box. God knows boys spend wads of stupid money on their toys but some girls' closets could fill a small store. We're all crazy.

Finally, most women I know like to look great, more so than most men do frankly, an that's to their credit. Sometimes dressing nicely is a sign of respect for yourself and those you're with. Guys could learn something here.

Perceived social rules (?): everyone (or most) wants to be perceived
in a certain way - the larger the wardrobe the more they feel that people define
them by their clothing over what they say and do. Those who are judging stitches
over actions are poor judges I would say. And, a long theory short, if you
adjust your wardrobe based on the superficial judgment of others wouldn't you
be helping to reinforce those wardrobe 'rules' that you find such a burden?

I think the image depicts a phenomenon or a symptom, I don't see it as supposed to speak on behalf of women skirts but on behalf of most women's choice in clothing. I even think it was made pretty clear. I find it accurate and interesting. Yet, I think it should be made even clearer that the social examples you place your explanation work the most in developed countries (I'd say in the US, since it's the only developed country I've lived in, truth is I don't know how accurate could I be with that assertion). I live in Colombia and while most of it rings true, there are differences. You see, in the two examples you touched upon: women in this city do wear cool, well thought, elaborate, not-necessarily-sexual costumes on Halloween, but might wear a "flirty" (according to the pic) mini skirt to a funeral or church (most of the folks here act pretty devoted). But a more class-privileged person might wear a heavily sexualized costume, and the same "flirty" or even a "provocative" mini skirt to more socially conservative events. So yeah. It's different, but the image does still tells us things about the world in general, not only about skirts and women. So yeah. Long time reader, first time calling, love the show. Thanks.

[…] woman’s appearance is assessed in terms of sexual provocation.  My favourite feminist blog, Sociological Images, wrote an excellent piece about this image, explaining that it very clearly illustrates why women […]

Holy crap guys, nitpicky much??? If you stop nitpicking at every detail and read the big picture, the POINT is obvious. Women have more clothes than men because it is socially expected for us to fit different occasions whereas men can get away with practically the same clothes all the time. A button down shirt for a man is a button down shirt. A button down shirt for a woman is an entirely different thing. Then there are tops with straps, how thick or thin are those straps? Strapless? Pullover? What about the neckline? Length? Too tight is slutty; too loose is sloppy and prudish. A pair of dress shoes for a man is a pair of dress shoes. There are so many variations on dress shoes for women it is ridiculous. Heels of varying heights, platform or no, open ot not, colors, embellishments, on and on and on. Women can't get away with just throwing in a pair of pants and a shirt and some shoes the way men always do.

Stop being so obtuse.

it is of very good quality..
buy cloths for woman-http://www.trendin.com/allensolly/womens-dresses-18

Wow, Discount seasons start. So Shop at fsession.com with our coupon codes to enjoy big discounts and savings. Don't wait!

Could "Asking for it" mean just that? Sometimes x = x.

Although it's a bit dramatic and generalized, the gist is well taken re: skirt length and related revelations in women's designs. Regards, wholesale womens shoes

Women will always find an excuse for their behaviour, no matter how illogical, selfish, neurotic or rediculous. Grow up and take some responsibility and accountability, for once.

Nothing stopping women from new clothers, like, jackets or any. I have great knowledge in this
Best regards, online wholesale second hand clothes in europe