Men and Women Use Uptalk Differently: A Study of Jeopardy!

What’s the big deal about uptalk? In The College of William & Mary’s Tom Linneman took a look at how women and men both use uptalk in his new study, “Gender in Jeopardy! Intonation Variation on a Television Game Show” in Gender & Society.

The punchline? Women use uptalk more frequently, but men use it as well. For men, however, uptalk signals something completely different. 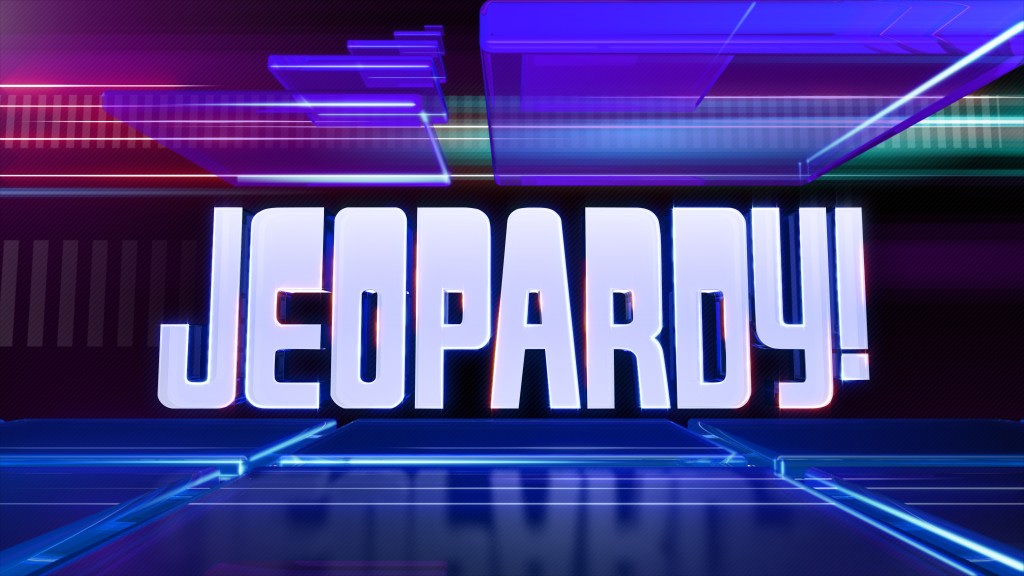 “Uptalk is the use of a rising, questioning intonation when making a statement, which has become quite prevalent in contemporary American speech,” explains Linneman. Uptalk in the U.S. is reported to have emerged in the 1980s among adolescent women in California, aka “Valley Girls,” and it has become more widely used by men and women since then. Uptalk has been associated with a way of talking that makes women sound less confident.

Jeopardy! was Linneman’s clever setting for observing how women and men use the speech pattern. The associate professor of sociology analyzed the use of uptalk by carefully coding 5,500 responses from 300 contestants in 100 episodes of the popular game show. He looked at what happened to speech patterns when contestants — from a variety of backgrounds — gave their answers to host Alex Trebek.  Although the contestants were asked to phrase their response in the form of a question, they used uptalk just over a third of the time.

How do men use uptalk?

Men’s uptalk increased when they were less confident, and also when they were correcting women — but not men. When a man corrected another man — that is, following a man’s incorrect answer with a correct one — he used uptalk 22% of the time. When a man corrected another woman, though, he used uptalk 53% of the time. Linneman speculates that men are engaging in a kind of chivalry: men can be blunt with another man in public, but feel obliged to use a softer edge with a woman.

How do women use uptalk?

As Linneman explains, “One of the most interesting findings coming out of the project is that success has an opposite effect on men and women on the show.”  Linneman measured success in two ways: He compared challengers to returning champions, and he tracked how far ahead or behind contestants were when they responded.  Linneman found that, “The more successful a man is on the show, the less he uses uptalk. The opposite is true for women… the more successful a woman is on the show, the more she uses uptalk.” Linneman suspects that this is “because women continue to feel they must apologize for their success.”

Probabilities of Uptalk by Certainty, Age, Race, and Gender 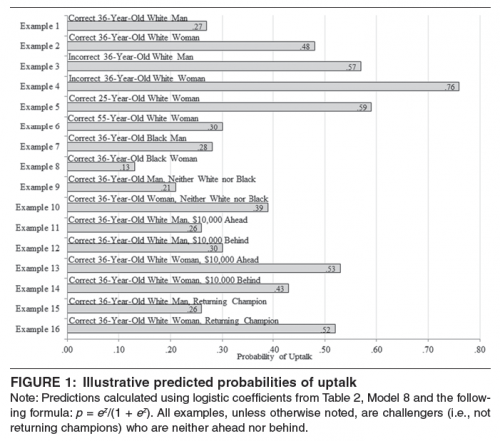 Virginia Rutter is a professor of sociology at Framingham State University.  She is the author, with Pepper Schwartz, of The Gender of Sexuality and The Love Test.  You can follow her on Twitter and at Girl w/Pen.

Huh. I never thought of this in English. I wonder if a similar study could be done with Japanese speakers. In Japanese, a question is ended with "ka" and the pitch goes up. That was what I first thought of when I was reading this.

i'm confused. aren't jeopardy 'answers' phrased as questions? how does that affect these results?

Uptalk is annoying. He has an interesting sample with Jeopardy contestants, but I wonder if his results can really be extrapolated to larger groups, since all those people are really good at trivia. It's like having an experiment with all redheads or something.

What I like most about this study is that he got paid for it.

[...] I hypothesize that this is something to do with a gender difference between the way men and women communicate. I’m pretty sure I sounded young and unsure when I opened dialogue, and he interpreted that as asking for advice or reassurance of some kind. See: Men and Women Use Uptalk Differently: A study of Jeopardy. [...]

I think the champion women use more uptalk because they're more sensitive to the feelings of the people around them... or possibly more comfortable with the game and using the upward lilt as a question mark as it is supposed to be used.

[...] speech habit for women, as it might play in to negative stereotypes–and just came across this discussion of an interesting study on gender differences in the use of uptalk. The [...]

I wonder how many contestants were Canadian. Uptalk is a huge part of Canadian speech patterns, especially in the eastern (non French speaking) regions.

I think the "chivalry" theory (re: correcting men vs. correcting women) is wrong, or at least backwards. J! players often take a chance more easily if someone else has already taken a guess, because the field of possible answers has been narrowed. Thus, people answering second are more likely to be unsure of their answers, and when anyone is not sure of an answer, uptalk is the *default*. Men aren't "using a softer edge" to be chivalrous with women; they just feel it's okay to go to the default. But against other men, intra-male competition demands that they need to appear confident even when they aren't, so they *repress* the uptalk. It's not chivalry; it's macho.

[...] a burgeoning trend in texts and Tweets (one of those trends, like vocal fry and uptalking, which, for some reason,women are leading). Logically, it doesn’t make much sense to reduce [...]

Uptalk is just what's known as high rising terminal in the Antipodes right? Bit late to the party aren't you guys?  S'ok, soon it won't matter; stay in the classroom long enough and eventually you'll only notice the rake of nails across the chalkboard when an outsider points it out ...

[...] week we learned that plain and simple language doesn’t always equal the truth, men and women use uptalk differently, and why tongue twisters are hard to say. We groaned over these disastrous [...]

[...] in the game and that women used it more when they were ahead. The professor concluded that the women’s use of uptalk when they were performing was a sign that they were apologizing for their success. Orrrrr were [...]

[...] Gender in Jeopardy! Intonation Variation on a Television Game Show [...]

She knows the answer? Jeopardy! and Uptalk | Society and Sexuality — February 23, 2013

[...] of Jeopardy! online, but really, who hasn’t? When I noticed this article popping up on my Twitter feed, I knew it would be a perfect way to get my new blog started. It’s the intersection of two of my [...]

[...] Men and Women Use Uptalk Differently: A Study of Jeopardy! | Sociological Images: “The punchline? Women use uptalk more frequently, but men use it as well. For men, however, uptalk signals something completely different.” [...]

Uptalk use by women and men | thefeministblogproject — March 4, 2013

[...] come across a couple of articles lately that are relevant to this discussion: - Men and Women use Uptalk Differently. “Uptalk” is the practice of ending a statement with a rising intonation, and this [...]

This article is baloney. Uptalk from a woman is a DEMAND for agreement, using a passive-aggressive method. It has nothing to do with modesty, repression, oppression or sensitivity to others feelings.

Women communicate with a combination of content and affect much more often than men, who rely more on content. Some young women push the affect too far, with a sing-song kind of uptalk and overly dramatic facial expressions, but in general it appears to me that, on average, women communicate more effectively and efficiently than men.

So one way to interpret this info is that men are not as good at understanding the coding of language, instead of that women use uptalk "wrong" because they don't use it the same way men do?
I don't think this is a very valid study due to the artificial setting of a quiz show, but whatever.
As an aside, this article certainly did seem to attract a lot of hostile answers! Sheesh, people - starting off the new year cranky or what?

I never knew there was a term for this. I just called it "white girl speak". No matter who's doing it, though, it's obnoxious! When I noticed my children (10 year old girl and boy) starting to speak this way I corrected them and told them to use the correct intonation for statements and questions.

Men and Women Use Uptalk Differently: A Sociological Study | Women in the Chemical Sciences — December 30, 2013

[…] game show Jeopardy! and the results are quite interesting.  You can read a summary of the study here or the full research […]

Internalizing Misogyny: The Lessons We’ve Learned And How They’re Holding Us Back | theradicalidea — January 30, 2014

[…] show that women apologize for success more than men do.  They may do this explicitly or implicitly, through downplaying their accomplishments or […]

[…] From time to time the media pick up on instances of English language use which do not carry over entirely happily from one variety to another. One of the most well-known of these must be the feature – variously known by such labels as ‘high rising terminal’ (HRT), ‘Australian question intonation’ (AQI), or ‘uptalk’ – which sees an upward inflection being introduced to utterances that are not actually questions. Long unremarkable in Australia, and increasingly unremarkable elsewhere in the English-speaking world, especially among younger speakers, this feature nevertheless annoys a lot of people who do not use it themselves. A recent online discussion of this phenomenon in the United States can be found here. […]

How Do Different Genders Speak in The Office? – Languaged Life — December 17, 2019