The Unsung Heroes of the Crash Landing in San Francisco

Like many people, I’ve been following news about the crash landing in San Francisco. It’s a frightening reminder of the risks that come with air travel, but an uplifting one thanks to the small number of casualties.  The Mayor of San Francisco was quoted saying: “We’re lucky we have this many survivors.”  And the Chief of the San Francisco Fire Department said that it was “nothing short of a miracle…”  At CNN, after mentioning the two confirmed fatalities, the reporter writes, “Somehow, 305 others survived.” Sheryl Sandberg, COO of Facebook, wrote that it was a “serious moment to give thanks.”  But to whom? 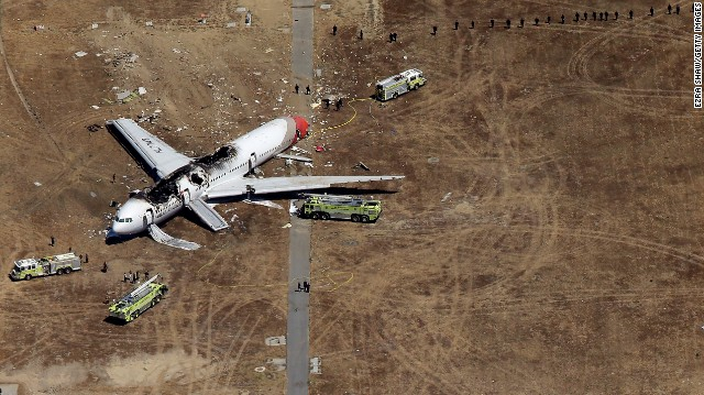 There’s a kind of person who is trained to maximize survival in the case of a plane crash: the flight attendant.  Airlines don’t advertise the intense training their flight attendants receive because it reminds potential passengers that air travel is risky.  As a result, most people seriously underestimate the skills flight attendants bring on board and the dedication they have to the safety of their passengers.

Flight attendants have to learn hundreds of regulations and know the safety features of all of the aircraft in their airline’s fleet. They must know how to evacuate the plane on land or sea within 90 seconds; fight fires 35,000 feet in the air; keep a heart attack or stroke victim alive; calm an anxious, aggressive, or mentally ill passenger; respond to hijackings and terrorist attacks; and ensure group survival in the jungle, sea, desert, or arctic.

It isn’t just book learning; they train in “live fire pits” and “ditching pools.”As one flight attendant once said:

This is why I’m surprised to see almost no discussion of the flight attendants’ role in this “miracle.” Consider the top five news stories on Google at the time I’m writing: CNN, Fox, CBS, the Chicago Tribune, and USA Today.  These articles use passive language to describe the evacuation: “slides had deployed”; all passengers “managed to get off.”  When the cabin crew are mentioned, they appear alongside and equivalent to the passengers: the crash forced “dozens of frightened passengers and crew to scamper from the heavily damaged aircraft”; “passengers and crew were being treated” at local hospitals.

Only one of these five stories, at Fox, acknowledges that the 16 cabin crew members worked through the crash and its aftermath.  The story mentions that, while passengers who could were fleeing the plane, crew remained behind to help people who were trapped, slashing seat belts with knives supplied by police officers on the ground.  The plane was going up in flames; they risked their lives to save others.

I don’t know what the flight attendants on this plane did or didn’t do to minimize injuries or save lives, but I would like to know.  Instead, they are invisible in these news stories as workers, allowing readers and future passengers to remain ignorant of the skills and dedication they bring to their work.

You say things like "frightening reminder of the risks that come with air travel, and "reminds potential passengers that air travel is risky." But really, air travel isn't risky. You're much more likely to be murdered as a resident of Detroit than you are to be in a plane crash as a passenger.

In the unlikely event that your plane does crash, it's not a miracle to survive in the sense of being rare or unexpected. Overall survival rates for air plane crashes in the US is 96% from 1983 to 2000. This, of course, is due in large part to the training of the crew.

I did see an article this morning that investigated the actions of the flight attendants a bit more, including mentioning how one of them was the last to leave the plane after working to get all passengers off while she had a broken tailbone: http://news.yahoo.com/asiana-attendant-describes-dramatic-evacuation-101658097.html

Morning Edition mentioned the flight crew as one of three elements that make crashes more "survivable," along with better cabin design and a more prepared emergency ground crew. http://www.npr.org/2013/07/08/199929875/why-airline-crashes-have-become-more-survivable "The fact that they serve coffee and tea and whatever else is certainly secondary," says Jim Tilmon, an aviation consultant who flew commercially for 29 years. "I mean, these flight attendants are extremely well trained."

The NYTimes posted a piece sometime today about flight evacuations and the flight attendents' role in safety procedures:
http://www.nytimes.com/2013/07/09/business/a-lesson-in-air-safety-out-in-90-seconds.html?hpw

It seems like Lee Yoon-hye (flight attendant & cabin manager) is getting some good praise in the media. So how about tackling some of the issues of racism that have sprung up with this disaster?

Like what makes it okay for the Chicago Sun Times to put up a headline like they did then making the kind of lame non-admission apology in faux innocence.
http://now.msn.com/chicago-sun-times-headline-about-asiana-airlines-criticized-for-being-racist

Perhaps because these kinds of comments are rife:
http://publicshaming.tumblr.com/post/54791337536/idiots-use-plane-crash-in-san-francisco-to-mock-asians

here's a story about Jiyeon Kim from a local Bay Area paper..

Adding to the list of good coverage, here's one from KTVU, a Bay Area news station:

A USAToday article also includes Lee Yoon Hye's work as a crew member. It was way at the end of the article, though, and I almost quit reading before I got there. http://www.usatoday.com/story/travel/news/2013/07/08/asiana-airlines-san-francisco-crash/2497769/

No One’s Talking About the Flight Attendant Heroes in the SFO Crash | Trains Planes and Baseball! — July 9, 2013

[...] piece originally appeared on Sociological Images. Republished with permission. You can follow Lisa Wade on [...]

Definitely seconding this. These plane crashes in which the majority of passengers survive are less of a "miracle" and more of a case in which the training of pilots (to land the plane safely) and flight attendants (to do everything else, from deploying emergency equipment to cutting seatbelts to aiding passengers who have trouble getting out of the plane). To treat the survival of passengers as a "miracle" ignores the contributions of ALL the people who make it possible--the attendants, the pilot, the ATC crew, and all of the people who trained them. A miracle implies supernatural intervention, not people doing a difficult (and in these cases, dangerous) job well.

The crashes in which nearly everybody dies are the result of someone not doing their job--usually the pilot, who is trained to make safe landings in emergency situations specifically so that plane crashes are survivable. Unless two planes collide with each other (which is rare thanks to the hard working ATC crew in the tower), there should be few fatalities in a plane crash.

tl;dr version: Flight attendants are not angels, but they act darn close when they save lives. Credit where credit is due, news crews!

The very first article I read had only a quote from a passenger saying that the flight crew seemed completely surprised crash (they weren't expecting it). The article then interpreted this extremely REASONABLE observation to mean that the flight crew was incompetent and imply that the passengers did most of the work getting people evacuated...? Yeah, I don't know, it was a pretty half-hearted article. Bleh.

This SocImages post is mentioned on Andrew Sullivan's Dish: "The Bassass Flight Attendants of Asiana 214"

Wow, and thank you for highlighting this aspect of the event. I hope it makes it into your book.

If flight attendants are supposed to be responsible for all of what the article says, why would they have to be unsung? They get paid for being expected to do things right in all the possible situations; and of course they willingly wanted to be – that's why they are on board with passengers.

The flight attendants have to rather feel sorry for two Chinese teenagers – fatalities so far – not saved them, as they also could have survived. As implied in the article, they should have done it, supposedly. I would like to know what the attendants did for them.

They do not have to be unsung, and they are not allowed to complain about what they did for the passengers has been underestimated. No wonder everything done by the flight attendants in the accident has been taken for granted.

People to be unsung is not the attendants, but some passengers who evacuated others in spite of potential threats from the burning fuselage.

I have to say... As a previous PhD student of Sociology turned flight attendant (yep you heard it right). I find the comments on here somewhat laughable. There are so many misconceptions regarding this crash. First, the pilot had over 10,000 hours wide body experience. He was getting his certification on the 777, which is not abnormal in the airline industry. Regarding, racism comments, most "shop talk" regarding Asian carriers/pilots/cabin crew are considered more highly trained and qualified. I don't think racism is playing out in the media. There are plenty of inflight discussion boards talking about an auto throttle malfunction especially on landing. They say Boeing has been fiercely lobbying to keep mechanical issues out of the public eye for an assortment of reasons. The $$ to cover up is a lot cheaper than the big corporate losses. I think the sociological observation/discussion falls to a classic class struggle. Worker vs. Boeing. Asiana gets off w/o the lawsuit and so does Boeing. Secondly, are we really surprised that engendered female laborers are the forgotten ones, once again? Aren't those ladies licensed in "care" not safety? (Big nod to hochschild, esp if you're reading this, I have such an epilogue for you).

I have been following this pretty closely and most reports have mentioned the heroic flight attendants. There has been mention that the shires deployed inside the plane and flight attendants used axes to give passengers access to the exits. I have also seen and heard accounts of a flight attendant who carried an injured boy on her back; this same woman gave a statement to the press yesterday. I do think they deserve more acknowledgement for what they do but in this case, I think ones the facts were known, these heroes have been given credit.

[...] Society Pages, Lisa Wade explains that so many people escaped death or grave injury because of the superb work of flight attendants, a group of workers whom we rarely consider in the event of a plane incident. To the flight [...]

Surprise! Your Flight Attendants Are All Strangers | The Etnovyr — September 5, 2013

[...] Whitelegg explains — few people understand their job and the airline industry deliberately misportays it — and also by a culture of confession. The galley has its own rules to which new flight [...]

Surprise! Your Flight Attendants are All Strangers | Work in Progress — September 11, 2013

[...] Whitelegg explains — few people understand their job and the airline industry deliberately misportays it – and also by a culture of confession.  The galley has its own rules to which new flight [...]

The Friendly Skies: On the 'Peculiar Identity' of Flight Attendants — October 4, 2013

[...] identity,” Whitelegg explains—few people understand their job and the airline industry deliberately misportays it—and also by a culture of confession. The galley has its own rules to which new flight attendants [...]

Surprise! Your Flight Attendants Are All Strangers — November 28, 2013

[…] Whitelegg explains — few people understand their job and the airline industry deliberately misportays it – and also by a culture of confession.  The galley has its own rules to which new flight […]