Racism and Xenophobia in “War on Christmas” Rhetoric

Last year a drug store chain in Canada, Shoppers Drug Mart, started playing Christmas music more than a month before the holiday.  Customers complained, perhaps, Tom Megginson suggested, because it is customary in Canada to wait until after  Remembrance Day on November 11 (a holiday honoring those who’ve died in wars) to start celebrating Christmas.

In response to complaints, Shoppers pulled the Christmas music and announced their decision on Facebook: 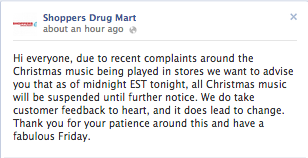 How might people interpret this decision?   Here’s a sampling of one type of response, collected by Megginson:

Notice that not wanting to hear Christmas in early November is conflated with not celebrating Christmas and that is conflated with a whole host of identities: not being a “real” Canadian and being non-Christian, non-white, an immigrant, and of a different “culture.”

For these commenters, the so-called War on Christmas is about much more than a competition between religious and secular forces, it’s also about the centrality of whiteness and a defense of “true” Canadianness against an influx of foreign cultures.  It is worth considering whether, in general, this debate is really code for racism and anti-immigrant sentiment more generally.

[…] Is the “War on Christmas” about Christmas? — For these commenters, the so-called War on Christmas is about much more than a competition between religious and secular forces, it’s also about the centrality of whiteness and a defense of “true” Canadianness against an influx of foreign cultures. It is worth considering whether, in general, this debate is really code for racism and anti-immigrant sentiment more generally. I dunno. Do conservatives ever fixate on race and immigration? Seems beneath them, somehow. […]

The discussion of "true" Canadianness isn't just limited to Facebook outrage; it's even intermingled with Québécois identity.

Earlier this year, the Government of Québec announced plans to introduce a "Charter of Québec Values" that would most critically bar the wearing of "conspicuous religious symbols" by those in state employ, including hospital staff and subsidized day-care workers. The resulting official image of what "conspicuous" means (scroll down to «un état neutre au service de tous»; "a neutral state serving everyone") show obvious cultural associations.

The reaction in English Canada has been generally negative, but the current government of the province still plans to introduce this explicit definition of just what it "means" to be Québécois.

Have Canadians forgotten First Nations Peoples contribution to the foundation of Canadian culture and do they show respect for it? H.

These comments sound like many of the ridiculous, defensive, ignorant statements made in the United States. Do these Canadians watch FOX news? H.

My, what good Christians we have in Canada (not)

In this case it seems unreasonable because of the actual motivation for objecting to the music, but in general, is this really unreasonable? After all, there is the sentiment that it is wrong to make cartoons that portray The Prophet, for instance. Even in the West, this is more strictly enforced than sacrilege towards Christian symbols or sacred Western secular symbols. Why are we as a society enforcing the conventions of other cultures or minority cultures more strongly than our own dominant culture?

A South Park episode demonstrated this perfectly, in America rather than Canada. The original cut featured a scene in which The Prophet hands Peter Griffon a football. This scene was censored by Cartoon Network. In response, the creators threw together a scene showing "the Muslim response" at the last minute, which consisted of, IIRC, Jesus shitting on the American flag. This scene was NOT censored. So it's ok to show that, but not anything that might upset Muslims.

The point that is often ignored in discussions about this is that demanding respect for your sacred symbols from people not in the in-group that regards them as sacred IS AN ASSERTION OF SOCIAL POWER. For certain sacred things to be protected while others are not elevates the protected in status. Attempting to raise the status of one's own sacred symbols is a natural response to an environment where a not insignificant number of people are attempting to elevate the sacred symbols of cultures above their own with special forms of respect.

[…] “It is worth considering whether, in general, this debate is really code for racism and anti-immigrant sentiment more generally.” […]

I think there is something behind all of that different from racism. What about feeling their culture being put down by others, or maybe feeling that immigrants are getting more cultural privileges/rights?
What is wrong with white people asking for respect for their culture? I'm not talking about acculturation of the inmigrants, but allowing the presence of white canadian culture.