The federal minimum wage is $7.25 an hour.  Several states mandate a higher minimum wage; the state of Washington has the highest, at $9.19. 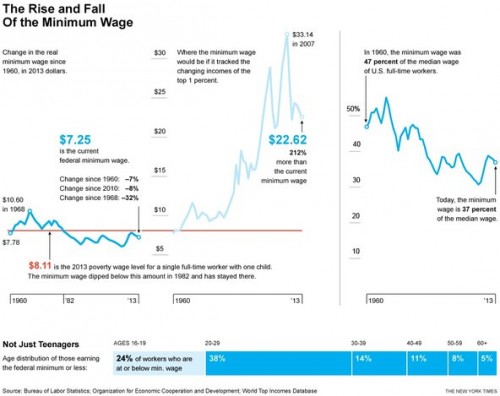 As for the appropriate value, why not $22.62?  That, as the graphic illustrates, is what the minimum wage would be if it grew at the same rate as the income of the top 1%. Alan Pyke explains:

[Such a large increase] may seem outlandish, but previous research indicates American workers have just about earned it. Worker productivity has more than doubled since 1968, and if the minimum wage had kept pace with productivity gains it would have been $21.72 last year. From 2000 to 2012 alone workers boosted their productivity by 25 percent yet saw their earnings fall rather than rise, leading some economists to label the early 21st century a lost decade for American workers.

Looked at from that perspective the current movement for a $15 hourly wage at fast food restaurants sounds reasonable.

Given that the top 1% has been getting a larger-than-they-should fraction of the total pie, I don't think it'd be fair for the minimum wage to track their growth - they should have gotten a lot LESS than they have.

But $15/hour sounds about right.

What does productivity mean? The article linked describes it as output from an hour's work. How is output measured for different jobs? Are we just looking at economic growth? What kind of output do teachers and custodians and researchers create and how on earth do you quantify it?

I think it's a little odd to label the 21st CENTURY a lost DECADE.

For emily: Worker productivity might be a result of dividing GDP by the working population, but I'm not sure.

I don't think that the top 1% growth should have risen as much as it has. However, the minimum wage should be much higher than it currently is right now--but maybe not quote $22.62/hr. What I have a problem with, is that not only has the minimum wage been stagnant for years, but so has the middle class earnings. I was trying to hire someone recently for a company that only wanted to pay the worker $11-$13/hr. This was a higher level thinking job and one that was in control of a lot of money. Then they wondered why they were having a problem getting the right candidate. I think the wage disparity really is apparent when you see what jobs out there require a lot of skill and the people doing them make next to nothing.

I typically turn off when I see exhibits that compare apples to oranges as if they're the same, so my first reaction to seeing wages compared to income is not favorable. Then there's the matter of workers "earning" an big raise because of gains in "productivity" as if everyone is either working twice as fast or 80 hours a week. Productivity of course is more a function of process, and since the 60s of technology, which is controlled my management. The arguments fail to inspire.

Having said that I believe consumers in America would be willing to pay for a significant hike in the minimum wage as Obama suggests so I support it fully.

Lastly I will comment that unskilled labor is going to have an increasingly difficult time keeping up in both wages and income with today's global and sophisticated knowledge workers. Governments can stick their fingers in that leaky dyke all day and not get far solving the problem if they don't attack education as a root cause.

The analytical-video series Extra Credits has an interesting modest proposal that rhymes with this post: tag the salaries of national legislators to the US median income. They even get generous and say to peg it to a fixed 250% of the median income, so it'd be about $100,000/yr this year. If Congress manages to do something that moves the dial on median national income significantly, they darn well deserve the pay increase they therefore give themselves, right?

1) Have there been productivity increases in service sector jobs that earn the minimum wage?

2) if a company makes twice as many widgets in the USA with the same labor force we could say they are twice an productive. What if the company's total output is also inclusive of widgets made in china? If a company moves a factory to china and fires all the workers except 50, do we measure the labor productivity of the remaining 50 workers without measuring the Chinese workers? I have a feeling last time i checked that "american productivity" rates are inclusive of things made with much foreign input that used to be american input.

If you can answer these questions it will help understanding

This is an interesting chart

What you missed this week while you were listening to Beyonce | Politics Power Sex — December 20, 2013

I hate when people quote the last time the min wage increased, cause it almost looks reasonable. but the minimum wage was 5.15$ for 10 FUCKING YEARS. that's years of increases that should have been. but when they raised it, they acted like it had just been a normal amount of time.

now it's been 5 years and we have to protest and fight for it to be raised. it should always raise with inflation, and they should reassess every two years without workers having to fight or strike or demonstrate.

The author in this article shows graphs to show how the minimum wage increased from 19998 to 2009. The first time President Obama increased the minimum wage it went to$10.10 an hour.President Obama rincreased the miminium wage because he felt that all workers deserved more pay and to increase productivity because the federal miminum wage had not kept up with inflation which means we were losing productivity. The New York Times shows a graph of what the miminum wage was in 1968 and how we as a society were suffering for not generating enough because there wasn't enough productivity iand how it has increased since 2009.