The “Asian F”: Perils of a Model Minority

“I feel ashamed of myself because my grade is not what an Asian should get,” reads a PostSecret confession.  The quote reflects the popular perception among Asians and non-Asians, alike, that if you are Asian, you should receive a top grade; anything less than an A is an “Asian F.” 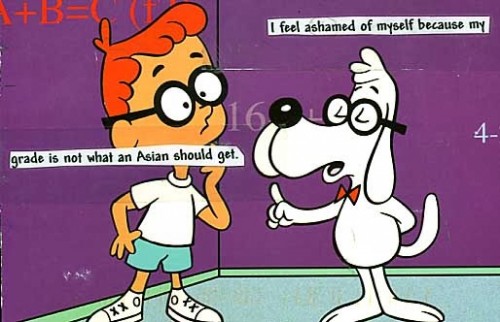 The association between Asian Americans and achievement is relatively recent. Less than a century ago, Asians were described as illiterate, undesirable, and unassimilable immigrants, full of “filth and disease.” As “marginal members of the human race,” they were denied the right to naturalize, denied the right to intermarry, and were segregated in crowded ethnic enclaves.

So what changed? The answer: the skills and educational profiles of post-1965 Asian immigration. According to the Pew Research Center, among recent Asian immigrants between the ages of 25 and 64, 61% have at least a bachelor’s degree — more than double the U.S. average of 28%. This is salient because children of highly-educated, middle-class parents — regardless of race/ethnicity — have a competitive edge over their poor and working-class counterparts.

That a higher proportion of Asian immigrant parents hail from educated backgrounds explains, in part, why they insist on supplementing their children’s education with tutors, after-school classes, and summer school. Their investment in supplementary education helps to insure that their children will stay ahead of their peers. In addition, because tutoring services and supplementary education classes are available in Asian ethnic communities, poor and working-class Asians have access to them, which, in turn, helps them academically achieve, in spite of their disadvantaged class status.

That the status of racial/ethnic groups have changed (and may likely change again) underscores that there is nothing obvious or natural about the link between race/ethnicity and achievement.  But, without understanding the high-selectivity of Asian immigrants and their means of supplementing their children’s education, one could make the specious argument that there must be something natural or essential about Asian Americans that result in high expectations and exceptional academic outcomes.

Jennifer Lee, PhD, is a sociologist at the University of California, Irvine. Her book, The Diversity Paradox, examines patterns of intermarriage and multiracial identification among Asians, Latinos, and African Americans.

Nothing like a simple, lucid and accurate explanation of phenomena to lay foolish thinking to rest. Great job on this post--thanks!

It strikes me that this is as much a story of America as it is about Asian immigrants. America, never perfect or even close to it, is the great assimilator. It can be a very harsh assimilator at times and can be selective in how well it does with different cultures and races. But there has never been so successfully diverse place on earth quite like America today. (I believe my home town of New York may be the most diverse place on the planet...)

Our ability to assimilate is the reason no one alive today will live to see America become the #2 power in the world and why I want to wring the necks of the politicians who are standing in the way of immigration reform as I write this now.

One very valuable aspect of being hospitable to cultural assimilation is that the host has insight into different approaches to problem solving that can be observed, assessed and adopted. The widely-held views in America of childhood and extended adolescence (to 21 or older) as valued and natural phases of the life cycle can be contrasted to the views of others who believe the early years are primarily about preparation for the future. There's no right or wrong in either view, only outcomes...

>That the status of racial/ethnic groups have changed (and may likely change again) underscores that there is nothing obvious or natural about the link between race/ethnicity and achievement....make the specious argument that there must be something natural or essential...

Hard to believe a professor of sociology (or of anything) could be so obtuse.

What's obvious (or should be) about the link between upper-middle-class Asians and achievement is that they place so much more emphasis on their kids doing well, which may not be 'natural' but sure as hell is cultural. Just ask any Tiger Mom. Pehaps you mean it's not 'innate' or 'genetic'?

I'd be interested to know how the actual numbers compare to the classic high-achieving stereotype of Asian kids, and particularly how it breaks down more granularly (e.g., families of Chinese, Korean, or Southeast Asian origin, etc.). I went to a school where there was a large Asian population, most of whom were children of Vietnamese and Cambodian refugee families. Locally they were NOT stereotyped as academic high achievers -- but rather as dangerous gangsters. But that was a long time ago ...

This article perhaps confuses culture with results of that culture. The fact that 61% of recent Asian immigrants have at least one college degree is one result of that culture. The hard work their children put in to make good grades is another. They're both effects rather than causes.

Nor is that anything new. Much of the hostility on the West Coast to Asian immigration a century and more ago rested on anger at how much harder Asians were willing to work and how they deferred gratification.

That's the central point of the influential 1901 Edward Ross article in the Annuals of the American Academy of Political and Social Science in which he coined the term 'race suicide.' All that has changed is that the emphasis of that hard work has shifted from doing well in farming, small businesses, and real estate to doing well in school. (You can find Ross's article as Chapter VII of my The Pivot of Civilization in Historical Perspective.)

Keep in mind that cultures can change. I'm almost done adapting a 1879 bestseller to a young adult novel called Lily's Ride: Saving her Father from the Ku Klux Klan. It contains a first-hand account of conditions in North Carolina just after the Civil War. Much of the initial white hostility to the newly freed slaves was based on envy that some blacks were rapidly moving ahead, getting farms and even horses to ride, as well as providing schools (staffed by women from the North) for their kids.

Some champions of rights for blacks pointed to that and suggested that those blacks would, in time, raise the standards of all blacks. The Democratic party, in the process of shifting from defending slavery to championing white supremacy hated that argument. They wanted to keep blacks dependent and pliable. (Sound familiar?) The Klan was created, in part, to destroy that work and education ethic by going after blacks who were doing too well for some white tastes.

That's precisely the reaction of many whites on the West Coast to Asian immigration several generations ago and perhaps more covertly today. It's why I and others suspect there are hidden quotas at many universities to limit the number of Asians accepted into professional programs. That's nothing new. There were similar quotas on Jews a century ago. Even today's racial diversity targets are merely a remake of geographic diversity targets used by schools such as Harvard to restrict Jews.

In the long run, perhaps what matters for a group isn't the percentage of those with a solid work/deferred gratification ethic. That's mostly learned in the home. It's how the group as a whole values that ethic. If it respects it, the group will move ahead. If it doesn't, the group will fall back.