What would you think of Woody from Toy Story if he wore pink? 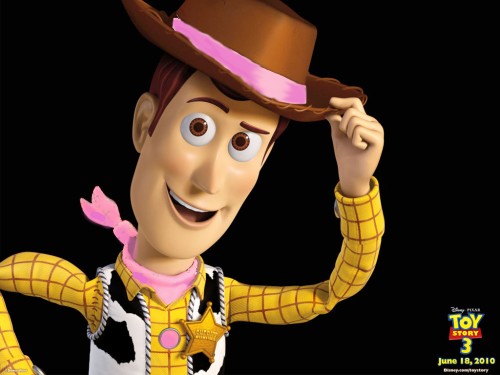 Would you think the color choice was incongruous — that it didn’t seem masculine enough for a 1950s-era cowboy toy?

Well, you’d be wrong. Check out these images from the 1955 Sears Christmas Book catalog that Elizabeth Sweet, a newly minted Ph.D. from the University of California at Davis, sent me. Here’s Roy Rogers Apparel, featuring Roy Rogers and his son, Dusty – who is wearing a cowboy outfit with red, yellow, and pink accents: 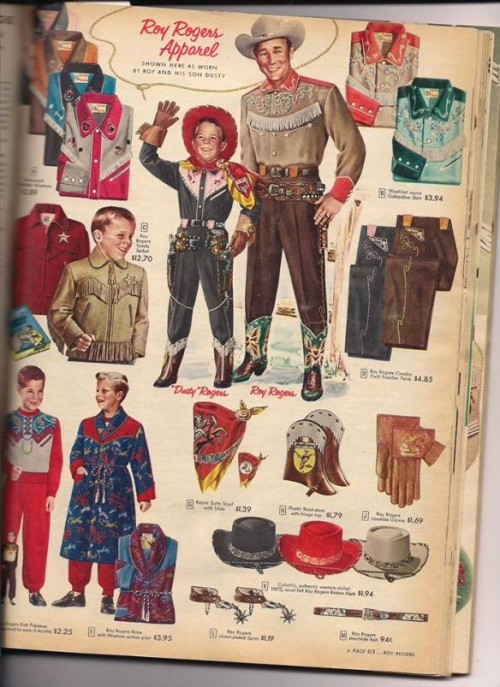 To modern eyes, this is surprising. “Pink is a girls’ color,” we think. This association has become so firmly entrenched in our cultural imagination that people are flabbergasted to learn that until the 1950s, pink was often considered a strong color and, therefore, was associated with boys. 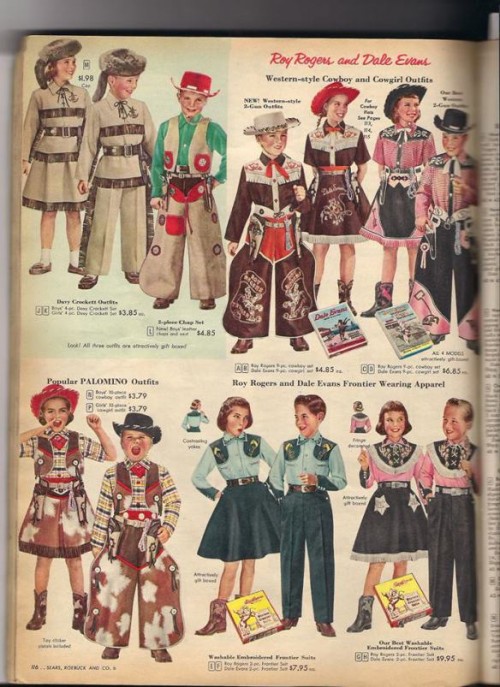 These spreads make it clear that in the 1950s, when Woody’s Roundup is supposed to have originated, Woody would have been pretty darned stylish in pink.

A decade later, things had started changing; pink was more closely associated with girls. (As Elizabeth notes of the Sears catalogs in her collection, “I didn’t find anything similar in 1965.”)

In today’s marketplace, I believe parents would love to see options like these. In fact, just yesterday, one of my friends posted this to facebook about his failed shopping trip:

Alright, parents, I went to buy my daughter cool costume stuff like pirate stuff and cowgirl stuff and all I found was princess outfits. She doesn’t know the word “princess.” She knows the words ‘cowgirl” and “pirate.” What’s the deal? Why does every company want her to be a princess? Why can’t she be an awesome cowgirl pirate?

Sadly, the reason is that in the retail world, this kind of diversity just doesn’t fly anymore. The status quo is segregation; as Elizabeth Sweet has argued, “finding a toy that is not marketed either explicitly or subtly (through use of color, for example) by gender has become incredibly difficult.” And the more entrenched this practice becomes, the harder it becomes to change, as change is perceived by marketers and retailers as a risk.

Therefore, for the foreseeable future, pink will serve as a clear delineation in the marketplace: If something is pink, it is most definitely not for boys, who regard it as a contagion — something to be avoided at all costs.

So it is that if Woody wore pink today, he would be unintelligible in the marketplace. And so it is that my friend can’t find a good cowgirl outfit for his little girl: he’d have to travel back to 1955 to do so.

The push for “girly” to be synonymous with “pink” saddens me. It has caused girls’ worlds to shrink, and it only reinforces for boys the idea that they should actively avoid anything girlish. Monochromatic girlhood drives a wedge between boys and girls — separating their spheres during a time when cross-sex play is healthy and desirable, and when their imaginations should run free.

Instead, we’re limiting our kids.

"Although gender segregation is de rigeur today, it wasn’t back then." That´s something i still don´t get. We had the sexual revolution, the new waves of feminism, etc., and yet in some respects it seems that we´ve been walking backwards.

Gender segregation was just as de rigeur back then. It just didn't need to be signaled with colour, because it was signaled with SKIRTS.

There is an underlying tendency in a few threads on this board to point the finger at marketers or retailers for "affirming" or otherwise promulgating social stereotypes by selling the things they do. To wit, from this piece, "the reason (parents don't have options to buy pink clothes for boys these days) is that in the retail world, this kind of diversity just doesn’t fly anymore".

This view barks up the wrong tree in my opinion. Retailers are competing as hard as they can to capture wallet share by offering clothes that are more likely to be appreciated by consumers than the offerings of their competitors. Competition is fierce out there and there's no appetite for attempting to force one social position vs. another on the finicky consumer.

Another fun example of the cowboys wearing pink thing would be Back to the Future 3, when 1955 Doc Brown sends Marty to the Old West:

It's interesting to note that this
cowboy culture trend was retro in its own day. Championing a return to
Post-WWII old school family-values and gender roles with the breadwinning male
at the head of the household. It is only through the all-too rose coloured lens
of today's sexual mores that we perceive an odd incongruence with the
assignation of gender indicators.

It's great to see top notch research and resources going into these topics, really great.

And you wonder why people bash on sociology....

Woody's design isn't particularly original, anyway. Compare him to Lucky Luke, a Franco-Belgian comic that parodied Western movies and started publication in the mid-1940's (and had René Goscinny as a writer, the same guy that did Astérix).

Not only do the girls wear skirts, but the boys are always in front.

I wonder if one contributing factor to the stronger gendering of colors nowadays compared to 50-80 years ago is that women's clothing has in other ways come to be more similar to men's.

When women's and men's clothes were completely different shapes, there was much less risk of looking too manly (for a woman) or to womanly (for a man) based on color choice. The thing that defined whether it was a man's garment or a woman's garment was the shape and kind of garment it was.

These days, professional women will often deliberately choose to wear a pink or pastel shirt with pants and a jacket, so their businesswear doesn't look too mannish--or they might go the more radical Hilary Clinton route and wear pastel pantsuits. Then, the more pastel colors get used deliberately as a way cue for, "I'm a woman!", the more stigma would be attached to a man wearing them.

There was a great deal less fear of male intimacy in the actual West, as scholars such as Jonathan Ned Katz have demonstrated. This has become so familiar to scholars that authors have to have jokey titles, in order to get themselves noticed

Here's an excellent critique from one consumer of these items:

[…] expectations in everything from clothes to Christmas cards. A recent blogpost reminds us that cowboys could wear pink without fearing for their manhood. Early modernists know young boys wore dresses until they were […]

[…] After all, men used to wear dresses and high heels, take intimate pictures with one another and wear pink in childhood.  In our scholarship and blog posts we have been grappling with making sense of some of these more […]