If You Refrain from Talking about Race, People Might Think You’re Racist

In this 4 1/2 minute video, Harvard business professor Michael Norton describes a study testing people’s willingness to talk about race.  He made volunteers play a simple game.  One picked a face from a field of 12 and the other asked yes/no questions in order to guess who they had in mind.  Among the field of faces, six were white and six were black. 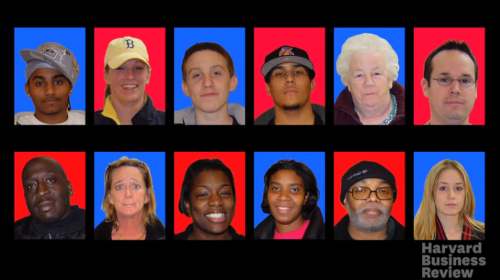 Even though asking if a person was black or white would eliminate half of the contenders, 43% of people did not mention race.  If the other volunteer was African American, they were even less likely to mention it.  In that scenario, 79% didn’t ask if the face they had in mind was white or black.

They reproduced the experiment with children and found that, while little kids would ask about race, by nine or ten, they’d stopped.  The little kids often beat the older kids at the game, given that race was a pretty good way to eliminate faces.

For the whole story, here’s the video:

So....an experiment that shows that perceptions of racism are frequently inaccurate? Did people who mention race do well on Implicit Association tests?

Am I the only person that would never refer to the 4th person in the top row as "black" or "African-American"? That Lakers fan looks decidedly Hispanic to me.

How many people asked: "Is the person white?" As Japaniard said, I would not be comfortable guessing the ethnicity of the six that aren't white. The video, however, only refers to black and African-American.

I would be interested to see results if they switched the game board so that there were even numbers of white and black people in the red/blue background divide. If the first question was related to the background color, then race is a less useful question and less likely to be used.

I was shocked to read "When playing with black partners, only 21% of players..." and hear Mr. Norton say "...if we have people play with a black partner..." without discussing the ethnicity of his "people" and "players". Only whites are people? Did they have non-whites involved in the sample?

My 9 year old will describe her friends (when I can't remember whose name belongs with which kid!) using all sorts of data, but will describe skin colour as "dark, medium, or pale." Racial categories don't often make much sense in our community - so I am described as having "medium skin" colour, while she is "pale" or "whitish" (rather than calling me metis or her white).

"Being PC" is uber-important these days. Not sure that makes one a racist but the study is interesting. I'm so competitive I'd have gone for color and sex right off the bat, just to win!

Maybe it's because I'm in Florida, but I don't see 6 black people in that image. I see 6 white people, 5 black people, and a Latino (top row, 4th from the left).

It's interesting that we've somehow evolved to the point where talking about race is considered rude. Dr. King did say "not judged by the color of their skin, but by the content of their character." I think that has a LOT to do with it. But the reality a person's race has very real impacts on a number of areas in his/her life and until we all get more comfortable talking about it--that is probably not going to change.

So they played Guess Who with real people.

When my family got a newer copy of Guess Who which had brown people in it (the one from my childhood was in terrible repair, though technically still playable), that was often one of the questions we asked. Though the official board isn't a 50/50 split like this experiment, making it less of a no-brainer, and more of a possible question. (from what I remember nearly every characteristic was something like a 75/25 split, with 4 equally distributed hair colours)

As an Australian I find this whole study rather silly. We don't mention race in any official documents because race is an artificial and old-fashioned concept. Nor do we ask the colour of people's skin because, well frankly it is meaningless. (Please note that race is NOT skin colour.) For example, my husband's skin is a lot darker than mine but for both of us our ancestors come from Europe.
What we do talk about is origin or heritage. So I might say someone is of South or Central American origin, of European background or of African heritage. But really even that is wrong because the whole point of heritage/origin is that it is self identified (i.e. I could well be wrong if I try to identify the origin of anyone but myself.).
I would certainly struggle to use the terms 'black' or 'white' because skin colour varies so enormously even in these images. I don't see anyone who is actually black or white. These images were clearly carefully selected to fall neatly into variations of pink or brown tones (if I have to compare them to a colour wheel). And just as an example, my husband would have browner skin than several of those supposedly identified as 'black'. So why use the terms 'black' or 'white'??? Surely it must be time to get past something as irrational as skin colour as a way to identify people!

First we scare people into thinking we will accuse them of being racist, then we say the way they try to avoid sounding racist is racist. I think this says more about the sociologists than the people interviewed.

shortest game of guess who

The Paradox Of Appearing Colorblind | The Penn Ave Post — December 17, 2013

[…] at 8:45 on December 17, 2013 by Andrew Sullivan In the above video, professor Michael Norton describes a game designed to evaluate people’s openness when talking about race. The game is similar to […]

Just for the record (look at the date, casual archive worker): This study is complete horse-dung. I write as a west-european observer and the only two guys that are "black" or African in any constructible way are the man in the lower left corner and the two women in the lower middle and even the right one there wouldn't go through with African around here. The older guy and the other two darker tones are Latinos, Brazilians, North-Africans, heck, even Malay or Indonesian is possible.
THIS is borderline third reich racism, calling anything not bleached by North European genes black. wtf, harvard, no wonder.

It is never explicitly stated that the volunteers in question were white. I got so confused hearing about the people being "even less likely when the other volunteer was African American", simply because my default isn't that people are white. 43% of the white people didn't mention race? What was the rate for people who were of color? So confusing.

[…] Not just what are you doing now, (don’t even get me started on now/just now/ now now) but what have you done? How do I speak of my experience, let alone write about my experience here? As a white, middle class American woman, how do I speak about race? Here I have become comfortable describing people as “black/white/colored” when months ago, I would have gone out of my way to describe a black person with any adjectives or characteristics other than black… “um, so that tall man in the corner… you know, the one with the darker hair and um dark skin”. Does that make me insensitive? Politically incorrect? Or maybe that dreaded word racist? (http://thesocietypages.org/socimages/2013/12/13/if-you-refrain-from-talking-about-race-people-might-…) […]

[…] If You Refrain From Talking About Race, People Might Think You’re Racist […]

[…] If You Refrain From Talking About Race, People Might Think You’re Racist […]

In situations like this I would say "light-skinned" or "dark-skinned" that have the same meaning, but sugarcoat it a little bit. It gets the point across without sounding too blunt.

Stupid! Everything is racist in the mind of many black folks. Damned if you do and damned if you don’t. That’s why we’re starting to see a backlash from modern white people, who are really beginning to care less what hurts anyone’s feelings. You can only make someone a scapegoat for so long, until the day that they bite back.