48% of U.S. Schoolchildren Live in Poverty

A new study has discovered that 48% of the nation’s 50 million public school students are in poverty, as measured by whether they qualify for free or reduced-priced lunches.  In 17 states, the majority of schoolchildren are poor.  Poverty rates are led by Mississippi, where 71% of children are in poverty.

These data represent a startling rise since 2000: 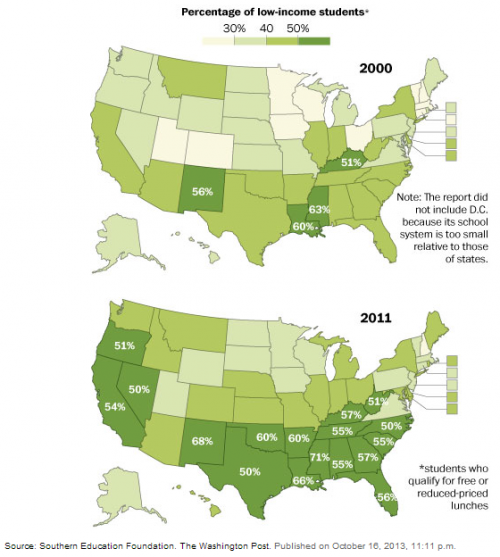 While the statistics are the worst for states in the South and the West, the percent increase in poor children was the highest in the Midwest (up 40% since 2001, compared to 33% in the South, 31% in the West, and 21% in the Northeast).  All, of course, extraordinary increases.

The Census Bureau reports the poverty statistics for school age children at 21.8%. Bad, but not 48%...

To compare across states it's probably better not to use the "eligibility" criteria as that tends to confuse more than educate.

Notably, eligibility for school lunch subsidies appears to be determined by a single nationwide formula based on household income and number of family members, which is not a particularly good indicator of poverty given the vast disparities in living costs. Unless individual states or school districts are adjusting their eligibility accordingly, the data shown may obscure the presence of poverty conditions in higher-wage Northeastern and West Coast states, or inflate them in states with lower housing costs.

This headline here is very misleading. These children are categorized as "low-income," which is different from poverty. The study defines low-income as "households where the income is 185% or less than the poverty threshold."

Keep in mind that the poverty threshold itself is a statistical bracket, defined as an income level below 50% of the median income level. In essence, the study finds so many students to be low-income because they wrote the definition that way.

Case in point: In a hypothetical scenario where there was a nearly perfectly equal income distribution, this study would still define roughly 46.25% of children as low-income. This absolutely reeks of advocacy statistics.

In the second half of the 19th Century the hope was that the social sciences, including sociology, could be transformed from prescriptive to descriptive disciplines. Perhaps it is only that contemporary sociologists are advocates/prescripsionists not the discipline itself

DC has as many people as Wyoming and Vermont, and near the heels of Delaware and Montana. And both Dakotas, duh.

What this article lacks is context. Saying roughly one out of two kids is poor leads you to believe that, in any given school, you could pluck out two kids and one would be poor.

This is not the case.

What you see, even in the more affluent States, are pockets of high-poverty neighborhoods whose schools are redistricted so they don't bring down the average test scores of the upper-middle class and rich neighborhoods. Not doing so would lead to less government funding, so instead of owning the problem, poor children are hidden from view.

In my opinion, this is MUCH more alarming than a statistical study.

We should be focusing on the rise in poverty in those pockets of America where kids are being ignored in gerrymandered school districts where their opportunity to learn (and escape) is limited because they can't afford the error-filled textbooks that the rich kids get.

America: where failure is patted on the back with a "good try, kiddo!"

[…] hoard just to protect ourselves. Maybe our governments will have to hoard too  – climate change hits economies hard, and foreign aid budgets are often […]

The Fall of Civilization - The Northern shrimp population in the Gulf of Maine has officially collapsed. — July 15, 2015