Kids growing up in dense, urban environments often turn to basketball as their sport of choice.  This is partly because it fits, in a physical sense.  All things being equal, a basketball court takes up a lot less room than a football or soccer field.  For the economically disadvantaged, it’s also relatively cheap to play.  If you have a court available, you only need a pair of shoes and a ball.  For this reason, whatever population finds itself in this type of environment tends to take up basketball.

That’s why the sport was dominated by Jews in the first half of the 1900s.  Just like many African-Americans today, at that time many immigrant Jewish families found themselves isolated in inner cities.  Basketball seemed like a way out.  “It was absolutely a way out of the ghetto,” explained retired ball player Dave Dabrow.  Basketball scholarships were one of the few ways low income urban Jews could afford college. 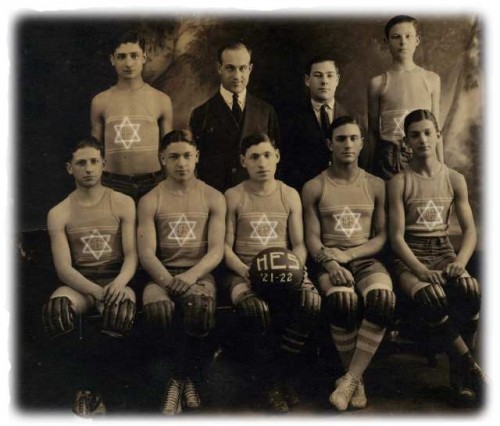 Today we refer to stereotypes about Black men to explain why they dominate basketball, but this is an after-the-fact justification.  At the time, very different characteristics — stereotypes associated with Jews — were used to explain why they dominated professional teams. Paul Gallico, sports editor of the NY Daily News in the 1930s, explained that “the game places a premium on an alert, scheming mind, flashy trickiness, artful dodging and general smart aleckness.”  All stereotypes about Jews.  Moreover, he argued, Jews were rather short and so had “God-given better balance and speed.”  Yep.  There was a time when we thought being short was an advantage in the sport of basketball.

Never underestimate the power of institutions and how much things can change. 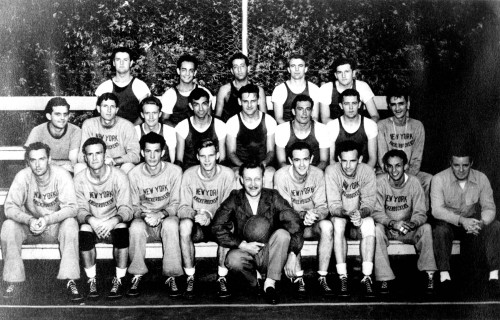 Just keep in mind when looking at that picture of the 1946-47 Knicks that the NBA didn't allow African-Americans to play until 1950.

There is a film about this, The First Basket.

The article you link to states that "Players who lost to all-Jewish teams whined that the shorter Jews had 'God-given better balance and speed.' ", not that this was something that Paul Gallico argued.

I see absolutely no evidence in this article that "Jews dominated professional basketball" during any epoch. The NBA did not come into existence until 1946. The league did not integrate blacks until 1950. WHERE is the data indicating that at any point Jews "dominated professional basketball"? All we get here is a picture of a Jewish team from the early 1920s (25 years before the NBA existed) and a picture of the Knicks in the '40s showing a lot of white faces (how are we to know how many of these are Jewish?).

I hope you don't go into the classroom making claims with this kind of flimsy evidence, Professor Wade.

The mythological metaphor for the coming world needs to leave the in-groups, clans, and gangs behind as artifacts of dying cultures, to be studied as history. The planet we are growing into is too small for people to identify themselves by their differences from others...and too sophisticated to resort to the kinds of childish name calling we see in this article.

And no religion too.

[…] fact about social construction is fascinating to me. Just such a stark, perfect […]

There was a news article back in the 40's I believe that stated that Blacks didn't have the intellect to play basketball. Funny how they were oh so wrong back then!

Another common stereotype they imposed upon the Jews back then was this partial quote: "..Jews were born with a basketball in their hands..." lol there was always a lame excuse, but never acceptance of true talent same with Blacks today. They are still saying that Blacks are genetically predisposed to basketball and athletics in general. However in the 30's and 40's it was stated that '...the negro didn't have the intellect required to play basketball.'

Fantastic find and very well written message. Thanks for this post!

Is Basketball Emerging as the New World Sport? | The Chronicles of Six — October 21, 2016

[…] games.  The increased development of the world is leading towards larger populations living in denser cities where the disenfranchised and marginalized dream of a nontraditional means of escap….  What is more, the equipment for playing basketball is more along the lines of the most popular […]

btw why are old post first that doesn't make sense
new posts should be first, then old posts, ya get it?

It's easy to seem like the best when you control everything.