Sociologists like to say that gender identities are socially constructed. That just means that what it is, and what it means, to be male or female is at least partly the outcome of social interaction between people – visible through the rules, attitudes, media, or ideals in the social world.

And that process sometimes involves constructing people’s bodies physically as well. And in today’s high-intensity parenting, in which gender plays a big part, this includes constructing – or at least tinkering with – the bodies of children.

Today’s example: braces. In my Google image search for “child with braces,” the first 100 images yielded about 75 girls. 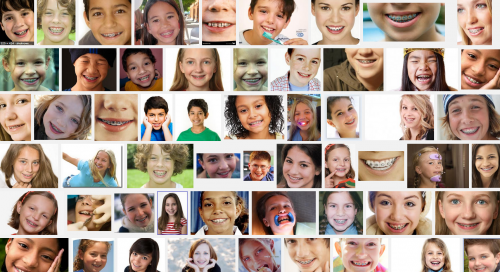 Why so many girls braced for beauty? More girls than boys want braces, and more parents of girls want their kids to have them, even though girls’ teeth are no more crooked or misplaced than boys’. This is just one manifestation of the greater tendency to value appearance for girls and women more than for boys and men. But because braces are expensive, this is also tied up with social class, so that richer people are more likely to get their kids’ teeth straightened, and as a result richer girls are more likely to meet (and set) beauty standards.

Hard numbers on how many kids get braces are surprisingly hard to come by. However, the government’s medical expenditure survey shows that 17 percent of children ages 11-17 saw an orthodontist in the last year, which means the number getting braces at some point in their lives is higher than that. The numbers are rising, and girls are wearing most of hardware.

A study of Michigan public school students showed that although boys and girls had equal treatment needs (orthodontists have developed sophisticated tools for measuring this need, which everyone agrees is usually aesthetic), girls’ attitudes about their own teeth were quite different: 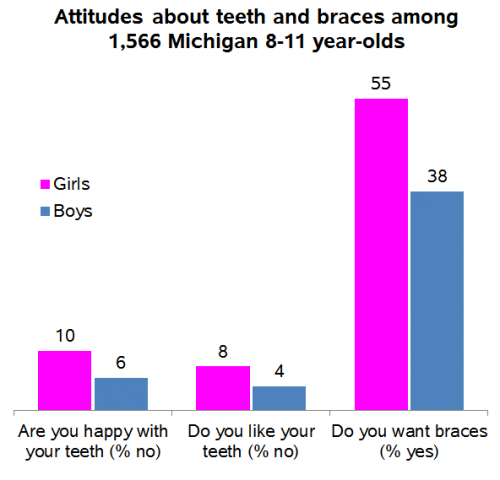 Clearly, braces are popular among American kids, with about half in this study saying they want them, but that sentiment is more common among girls, who are twice as likely as boys to say they don’t like their teeth.

This lines up with other studies that have shown girls want braces more at a given level of need, and they are more likely than boys to get orthodontic treatment after being referred to a specialist. Among those getting braces, there are more girls whose need is low or borderline. A study of 12-19 year-oldsgetting braces at a university clinic found 56 percent of the girls, compared with 47 percent of the boys, had “little need” for them on the aesthetic scale.

The same pattern is found in Germany, where 38 percent of girls versus 30 percent of boys ages 11-14 have braces, and in Britain – both countries where braces are covered by state health insurance if they are needed, but parents can pay for them if they aren’t.

Among American adults, women are also more likely to get braces, leading the way in the adult orthodontic trend. (Google “mother daughter braces” and you get mothers and daughters getting braces together; “father son braces” brings you to orthodontic practices run by father-son teams.)

Today’s rich and famous people – at least the one whose faces we see a lot – usually have straight white teeth, and most people don’t get that way without some intervention. And lots of people get that.

Girls are held to a higher beauty standard and feel the pressure – from media, peers or parents – to get their teeth straightened. They want braces, and for good reason. Unfortunately, this subjects them to needless medical procedures and reinforces the over-valuing of appearance. However, it also shows one way that parents invest more in their girls, perhaps thinking they need to prepare them for successful careers and relationships by spending more on their looks.

When they’re grown up, of course, women get a lot more cosmetic surgery than men do – 87 percent of all surgical procedures, and 94% of Botox-type procedures – and that gap is growing over time.

As is the case with lots of cosmetic procedures, people from wealthier families generally are less likely to need braces but more likely to get them. But add this to the gender pattern, and what emerges is a system in which richer girls (voluntarily or not) and their parents set the standard for beauty – and then reap the rewards (as well as harms) of reaching it.

Having straight teeth appears to confer an advantage to men as well as women - note that the male newsanchors pictured above are no less orthodontically "correct" than the women. I don't know how it stacks up against other factors in parenting choices, but clearly there is a tangible value for all adults in having straight teeth.

Meanwhile, if we're going to discuss tinkering with children's bodies outside of medical necessity, I suppose we'll also have to talk about circumcision, which strikes me as far more invasive and ethically dubious than orthodontia.

Although orthodontic need may be "usually aesthetic", that is far from universal. My son's orthodontry was necessitated by an impacted canine that didn't descend and had to be pulled into a functional position. (Admittedly, the orthodonist continued the treatment to fix his bite and make his teeth "beautiful", but the amount of extra treatment for aesthetics was a tiny fraction of the total.)

Pink and blue bars on the graph? How stereotypical.

My half-sister lived with her father in a poor farming community and went to school at a low-income high school. She had the exact same tooth problem that I had but she decided not to get braces. (I had a tooth that didn't come forward all the way and over the course of 5-6 years the orthodontist fixed this problem). She said all the kids at school would have teased her (and basically ostracize her) since braces signified wealth. And she didn't want to be bullied for being the "rich kid".

I'm glad I had braces. My bite would have never aligned properly and I would have had constant jaw pain. As a child it was frustrating for me to not properly bite my food and chew it without knocking teeth. I also believe that since my jaw had to be spread open using a crank, my face shape has changed and is wider on the bottom than it used to be.

[…] At Sociological Images, Philip looks at how gender norms and beauty pressures manifest in the numbers of girls vs. boys who get braces. […]

it's interesting that so many kids want braces and so many less were unhappy with their teeth (if I'm reading right). a lot of kids don't want braces even if they need them, so I wonder how those statistics relate.

I was one of those kids who wanted braces but didn't need them. I wasn't unhappy with my teeth at all, though the bottom ones are crooked, it was the look of braces I liked. but it wasn't meant to be. even though my teeth've been pretty fucked up and it's hereditary, it was never anything braces could fix.

Not all orthodontia is cosmetic, though. I have a very small maxilla/mandible and my teeth just didn't fit. Like, my two front teeth were coming in perpendicular to each other. I would have been in for a world of pain if it hadn't gotten fixed, and I'm aware of how lucky I am that my parents were able to do so.

If you grew up in the 60s as I did sporting braces subjected you to nervous laughter. I like my teeth but most would consider them to be a bit crooked. No braces. My mother even supervised a team of dental hygienists for a living and we wouldn't have paid for them.

Fast forward to the year 2000 and my 12 year-old daughter pleaded with us to get braces. Her teeth are so perfect and straight they appear hand drawn, but peer pressure was exerting its influence. (No braces.)

In my narrow, New Yorker's experience as a parent of a now 25 year-old it appears to me that boomers became overly competitive parents, pushing their children too hard to excel in every aspect of life and teaching to the college application. Our kids didn't "go out and play"; we escorted them to "play dates" and planned activities highly structured by adults. But it was the mothers who most often cracked the whip on their daughters to conform to ever-increasing societal demands for beauty and perfection.

The dads were no better with their sons, especially with high schools sports, but we laid off the teen age girl dress-and-look thing. Most of my peers thought it was far over the top to be honest.

In the past 30 years we seem to have taken a step backwards. Our kids are more competitive and more conformist than we were, and its our fault.

[…] “More girls than boys want braces, and more parents of girls want their kids to have them, even though girls’ teeth are no more crooked or misplaced than boys’. This is just one manifestation of the greater tendency to value appearance for girls and women more than for boys and men. ” […]

[…] is even more true for women, according to Philip N. Cohen at Sociological Images. Not only are girls more likely to want braces, they’re also more likely to get them for […]

[…] post was originally published at Sociological Images; cross-posted here with […]