Over Half of Today’s Teenagers Are Virgins

In my lecture about the sex lives of college students, I remind students that they didn’t invent casual sex.  This always prompts some snickers.  The fact that today’s students have about the same number of sexual partners as their parents did at their age evokes an even stronger response.   About 1/5th of college students will be virgins when they graduate college.

In fact, college students aren’t as sexually active as the moralizing makes it seem.  And neither, it turns out, are teenagers.  According to the Centers for Disease Control, 57% of girls and 58% of boys age 15 to 19 have never had penile-vaginal intercourse.  Moreover, the percent of teenagers that have had intercourse has been dropping consistently over the last 20 years. 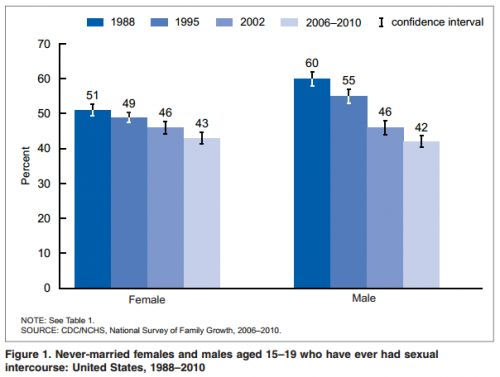 So, despite the fact that young people are more likely than earlier generations to engage in oral sex before initiating penile-vaginal intercourse (especially fellatio), they continue to take intercourse very seriously.  This may be, in part, because men are becoming more like women in this regard.  Men’s numbers have dropped much more sharply. In addition, for the first time the CDC study found that boys’ #2 reason for not having engaged in intercourse was that they were waiting for the right person.  Men cited this reason 29% of the time, compared to 19% for girls.  For both boys and girls, the #1 reason is that it’s against their religion (41% of girls and 31% of boys).  Concerns about pregnancy come in third.

Pretty misleading title. "Over Half of Today's Teenagers Have Not Had Traditional Heterosexual Intercourse" might be more appropriate. If you count oral sex, I'm guessing 1/5th of college graduates aren't virgins. And if PIV sex is the only thing counted, then the appropriate statistic would be how many *straight* grads are virgins. I hadn't had PIV sex when I graduated college (still haven't), but referring to me as a virgin would have been absurd.

People who haven't had penile-vaginal sex are "virgins"?

Most of my gay and lesbian friends will be thrilled with this news.

I'm in agreement with the previous commenters, this title is both misleading and heteronormative. "Over half of today's teens have never had PIV sex" would have actually been accurate, albeit lacking the sensationalistic punch that this one carries.

more like, more people nowadays admit to being virgins. possibly because virginity itself is less stigmatized.

Homosexual intercourse is obviously not part of this statistic but it also covers a minority group within the population. Including that demographic in this study would change the numbers somewhat but not significantly considering the percent of the population that identifies as homosexual.

[…] Well here’s an interesting statistic about the youths these days… […]

[…] Over Half of Today’s Teenagers Are Virgins » Sociological Images […]