Race and Gender in… Angry Birds?

I have enjoyed Star Wars Angry Birds since I first discovered it almost a year ago, at the suggestion of my brother (a fellow Star Wars fan). While I never warmed to the original Angry Birds, I was tickled that I could clearly identify the Star Wars characters the birds represented in the themed version of the game. When Star Wars Angry Birds II released last month, I anxiously dove into the sequel.  On a whim, I decided to use the new store feature to look through the many characters that I might someday unlock.

When I finally scrolled through all of the characters in the game, I noticed something peculiar.

This pattern held true for every (human) male character with two notable exceptions: Captain Panaka (played by Hugh Quarshie, a black male) and Mace Windu (played by Samuel Jackson, a black male) are both portrayed by brown birds. 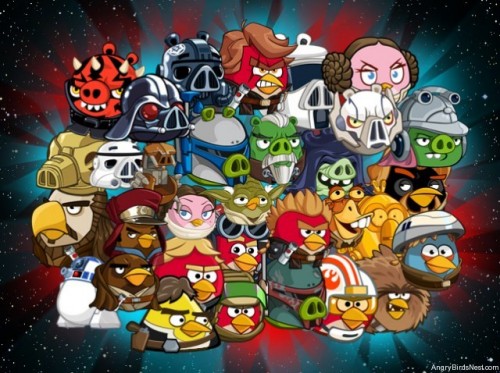 Likewise, gender is also a defining characteristic for the portrayal of female characters. Princess Leia (played by Carrie Fisher, a white female) and Padme (played by Natalie Portman, a white female) are both portrayed by pink birds. There are no other pink birds in the game.   Again, the color of the bird is unimportant, unless the bird is female, in which case the character’s gender (denoted by its pinkness) becomes the essential element of that character.

This same pattern also appears in the original Star Wars Angry Birds, in which Princess Leia is the only pink bird and Lando Calrissian (played by Billy Dee Williams, a black male) is the only brown bird.

White privilege and male privilege persist, in part, by framing the white, male experience as normal. Even in a game like Star Wars Angry Birds II we see the invisibility of whiteness and maleness and the foregrounding of race and gender for people of color and women.

Galen Ciscell is a visiting assistant professor of sociology at Pacific Lutheran University.  He is also the designer of the cooperative board game Atlantis Rising.

Interesting observation. If "black" or "woman/pink" is as important as "has lightsaber" or "Corellian Blood Stripe" (I am such a nerd), then how does that extend to the greater social context? Is minority or female status an objective, measurable trait (and normalized white maleness not)? Would a light skinned actor playing Lando Calrissian still be brown? What color did they make Jango Fett (a Maori)?

Star Wars was an interesting opportunity to be 'inconsequentially black' and I am not sure how well that went once passed through the filter of Hollywood. In a galaxy of green, blue, and red/black skinned people, is it really critical that the players of angry birds be reminded that the actors are brown?

If a yellow Han Solo says something about the inconsequential color of the 'normalized' white skin, what does it say about the reified brown-ness of those characters whose actors defined the color of their bird?

Very interesting, I wonder how a black female character would be represented?

You're a casual gamer? Just so you know, I hold you and all casual gamers responsible for the horrific decline in the quality of video games recently. From this day forward, you are my sworn enemy.

I assumed the pigs were white people because they seemed to own all the property & obtained it through theft. OH SNAP, CHRISTOPHER COLUMBUSTED. (I actually haven't played the game but I think that is the plot, right, the pigs steal the homes of the birds & then build ugly houses on top of them?)

And Yoda is green. So whats your point?

In questions like these I like to consider the alternatives. Like if a Lando bird wasn't brown, would people see THAT as problematic or indicative of some social trend.

If you need a new editor, or a new researcher, don't hesitate to call.

what a bunch of horse shit

Like all race-baiters, you seem to have very little critical thinking skills. I'll assist.

The main characters are based on the main birds of the original Angry Birds. The red/yellow/blue/etc. birds, each with certain abilities, each become Luke, Han, etc. The only female bird in the original was pink (girls like pink, that's not sexism, that's fact), so Leia is pink. When the game runs out of colored birds from the original game, the characters look like their movie counterparts:

If you want to have a discussion about a lack of women or (American) minorities in Star Wars, go right ahead. But you are WAY off base in regards to Angry Birds. I'd also consider doing a little more research next time as well.

Interesting argument, although it completely ignores the fact that all white characters in the Empire are not portrayed by any color as you say, but are in fact portrayed by green. Let's continue...

Take a look at Mace Windu in the picture above. Tell me, how did you know which bird was Mace Windu? It's because Mace's bird is brown. Let's say Mace Windu's bird was blue. Would you still be able to identify him in the picture? Besides his color, mace has EXACTLY the same wardrobe as any other jedi in the star wars universe.

Your argument makes sense, but it seems that the color scheme for this game is used to help identify characters in the saga rather than calculate white and male privilege. Being able to easily recognize characters makes for an enjoyable experience (it tickles you, apparently, which is strange) and makes the game more fun.

Sheesh another bleeding heart social justice warrior wimp....you mention white privilege and male privilege? It's called the law of the strong, the stong deserve the privilege. You and your race/gender isn't because you are weak, inferior and pathetic. Don't paint the picture like privilege is bad...it only is to wimpy brain dead liberal scum like you