U.S. Corporations are Hoarding Wealth at Highest Rate Since 1971

The dominant firms in the U.S. and other major capitalist counties are happily making profits, but they aren’t interested in investing them in new plants and equipment that increase productivity and create jobs.  Rather they prefer to use their earnings to acquire other firms, reward their managers and shareholders, or increase their holdings of cash and other financial assets.

The chart below, taken from a Michael Burke post in the Irish Left Review, shows trends in both U.S profits and investment . 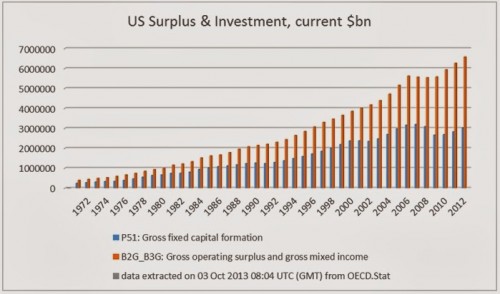 According to Burke,  if U.S. firms were simply to invest at the level they did in 1979, not even the peak, the increase in investment in the American economy would exceed $1.5 trillion, close to 10% of GDP.

The same dynamic is observable in the other main capitalist economies:

So what are firms doing with their money? As Burke explains:

The uninvested portion of firms’ surplus essentially has only two destinations, either as a return to the holders of capital (both bondholders and shareholders), or is hoarded in the form of financial assets. In the case of the U.S. and other leading capitalist economies both phenomena have been observed. The nominal returns to capital have risen (even while the investment ratio has fallen) and financial assets including cash balances have also risen.

So, with firms seeing no privately profitable outlet for their funds, despite great societal needs, their owners appear content to reward themselves and sock away the rest in the financial system.  In many ways this turns out to be a self-reinforcing dynamic.  No wonder things are so bad for so many.

" new plants and equipment that increase productivity and create jobs."

3. "firms seeing no privately profitable outlet for their funds" why don't you tell them where those outlets are? What if there actually are none?

The only value of Capitalism is profit.

Man, if only there was some kind of state-sponsored theft we could use to make them "invest".

Look at it this way:

1. Since the ROI on financial assets pales in comparison to business assets in normal economic times, those with excess cash would LOVE to invest it to grow their businesses.

2. Shareholders (say pension funds, for example) require prudent investments. When demand is low, business investment becomes more risky, so excess cash is given back to shareholders as dividends. No one really likes that solution in comparison to investing is businesses, but its better than the current alternative.

This is going to tun around until the economy does...and blaming management teams isn't going to have an affect on it.

If companies give the money to bondholders and shareholders, they proceed to spend or invest it, just like the company would.

if companies save the money in banks, the banks proceed to invest it or spend it, same way.

Worries should really arise if money isn't getting spent at all.

how is any of this a bad thing

I am really interested in knowing what the barriers are to investment, particularly analyzing norms of behavior by investors rather than reducing the financial system to a set of "interests." Do norms correspond to technological changes or not? How (not why) are more innovative/sustainable/socially conscious investment projects being drowned out (or being bolstered)? Are new ways of investing being sought out that do not follow the norm? How much legitimacy do they have?

Pay higher wages.....demand goes up....more demand means more investment opportunities......
Demand is the key! 70% of economy is consumer demand....15% is governemnt spending.....the rest is the rich. They have theirs. Their is no demand to invest in. Take out demand from higher wages......economy falls apart.......wealth gap grows...middle class shrinks
It is also why trickledown and tax breaks for rich dont work very well, especially in a low demand economy.

Most rents that are available in society are based on the evolution of asynchronous power in society. Since we as individuals derive that power from social arrangements it follows that these social arrangements can shift. In fact it is inevitable because pressure to do so builds from the growth of inequality.
If a person of property can prove they are benefitting society they have a better long term chance of keeping wealth. If they can't they can loose social license or even provoke a revolution the catastrophic case.
Property is a social convention not a natural right.
Those who don't recognise this do so at their peril, and those who do can be intelligently self interested.

U.S. CORPORATIONS ARE HOARDING WEALTH AT HIGHEST RATE SINCE 1971 | Welcome to the Doctor's Office — November 20, 2013

This is not surprising. Companies are reluctant to invest when, any time they do invest, the government comes along and punishes them with draconian regulations.