Does Fatherlessness Cause Crime?

Last week Kay Hymowitz (who sometimes works out of a PO Box rented by Brad Wilcox) wrote the following in the LA Times:

As far back as the 1970s, family researchers began noticing that… [b]oys from broken homes were more likely than their peers to get suspended and arrested… And justice experts have long known that juvenile facilities and adult jails overflow with sons from broken families. Liberals often assume that these kinds of social problems result from our stingy support system for single mothers and their children. But the link between criminality and fatherlessness holds even in countries with lavish social welfare systems.

Ah, the link between criminality and fatherlessness again. So ingrained is the assumption that crime rates always go up that conservatives making this argument do not even see the need to account for the incredible, world-historical drop in violence that has accompanied the collapse of the nuclear family. I know Kay Hymowitz knows this, because we’ve argued about it before. But if her editors and readers don’t, why should she make a big deal out of it?

In this graph I show the scales down to zero so you can see the proportional change in each trend: father-not-present boys ages 10-14 and male juvenile violent-crime arrest rates. 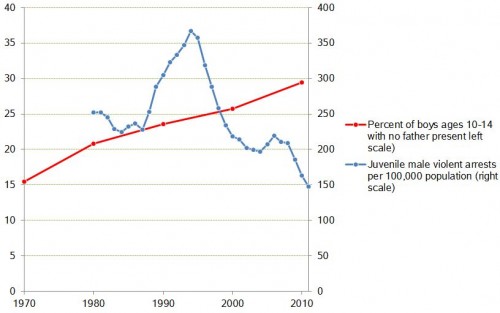 I’m not arguing about whether boys living without fathers are more likely to commit crimes. I’m just saying that this is very unlikely to be the major cause of male juvenile violent crime if the trends can move so drastically in opposite directions at the same time. These aren’t little fluctuations. Even if you leave out the late-80s-early-90s spike in crime, arrests fell about 40% from 1980 to 2010 while father-absent boys increased almost 50%.

If you are going to argue for a strong association — which Hymowitz does — and use words like “tide,” you should at least acknowledge that the problem you are trumpeting is getting better while the cause you are bemoaning is getting worse.

The pattern for crime in general follows the well-known pattern that we see: the increase in the proportion of male adolescent/young adult population to other age/gender populations generally is associated with an increase in crime. I don't know that "fatherlessness" is the problem, but I DO know that poverty is associated with crime. Because single women with children, and their children under 18, have the highest rates of poverty, I don't think that the poverty/crime connection should be understated or ignored, in favor of pointing to "fatherlessness."

So, conversely, there would be a positive correlation between the percentage of boys WITH a father present and juvenile arrests for violence, since the overall direction of both is falling. I'm not suggesting causation, but those who state the opposite ARE.

Let's also remember that the blue line represents *arrests* which is not necessarily the same thing as the crime rate. The 90s myth of the super criminal (mostly young black males) and the "war on drugs" could also have an effect here.

However, the rather important graph that you don't have is the amount of juvenile crime from fatherless kids versus fathered kids.

My understanding is that general social disintegration correlates with crime against persons and property within relatively small areas of geography. This would include divorce, drug abuse, high teenage pregnancy, low performance in schools, high unemployment, and acceptance of a victim image.

I have never heard of causal models being build around any of these variables, including fatherlessness.

"I’m not arguing about whether boys living without fathers are more likely to commit crimes"
Yes you are; in that your article is literally entitled:
DOES FATHERLESSNESS CAUSE CRIME?

We are just witnessing the general trends of well documented population bulges. Many reasonable predictions have been published, based on these population statistics, including the prediction of a generalized drop in criminal behavior (this has been widely published, amongst many other observations that are presumably related to your field of expertise).
I know you are aware of the erroneous tendency to imbue causation from correlations, but damn,.. this is disappointing, lazy work. Go to the library, please.

This is sociological malpractice, and the author knows it. The proper way to test whether fatherlessness causes crime is to compare groups of boys with fathers present against those without, subject to proper controls. There are a variety of methods to do this, matched pairs, logistic regression, etc. But the poster doesn't do that.

Further, 'arrests' is a horrible proxy. First, it is unclear whether that 'per 100,000' of population is the total population or the population of juvenile males. Second, with the advent of 'three strikes' laws, there are fewer many-multiple offenders. We lock up a lot more criminals now, percentage wise, than in 1980. Those guys aren't free to plump up the arrest stats.

Though it appears both numbers should move in the same direction, this is not so. The overall crime rate is not a factor in controlled (econometrically) studies of predictors of crime. The data point used to study family effects on crimes rates is the individual crime rates. And to answer your second question, the overall rate can fall while individual propensity for commuting crimes increases because of reductions in offenses per capita. Why the reduction in crimes per capita? Because we are locking up more people than ever before. So, it could be that family deterioration is the reason for increased incarceration time per person. I'm not advocating anything. So hold the hate mail. I'm just clearing up a statistics also question.

Fatherlessness is the main cause of increase in crime rate and drug addiction in boys and girls, No matter how far people try to hid this fact, fatherlessness is destroying the young generations, more and more kids are getting attracted to negative path due to lack of proper guidance and protection which they get from their fathers. Judiciary should consider the fact that fathers play very important role in child's life, so its mandatory to make sure child gets equal time with father as with mother. Why should child suffer fatherlessness because of some stupid issues between their parents? Children who spends good quality time with their father are very well groomed and have better mental stability, they learn to be strong in even worst situations. Fathers play very vital role in child's physical and psychological development. Its really important to understand the sever impact of fatherlessness on child's psychology, all nations and governments should take it seriously and implement strict laws to and amend existing laws to felicitate child by providing equal and good quality time with father no matter what issue both parents have among themselves.

That is why crime has decreased. You think it might be better for the kids to be raised in a house instead of a cage?