Tiny the Pterodactyl and the Gender Ideology of Halloween

Here’s an interesting example of the triumph of ideology over simple fact.  Fia K. sent in a link to a costume sold at Amazon titled “Tiny Boy’s Costume.”  The costume is a green pterodactyl.  There is no equivalent Tiny Girl’s Costume.  When I search for that phrase, the search engine deletes the word “girl” and sends me back to here. 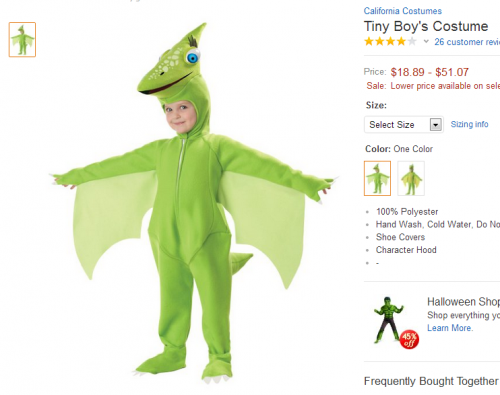 This is more than just an instance of associating boys with dinosaurs and excluding girls, although that would be problematic enough.  No, the costume is called “Tiny” because it’s associated with a cartoon character with that name from the show Dinosaur Train. 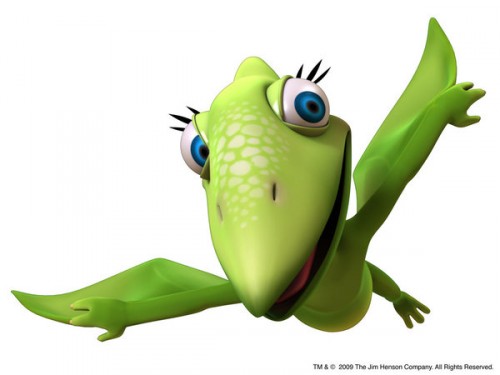 This is evidence of how powerful gender ideology can be.  Tiny’s actual fictional femaleness is less powerful than the ideological association of boys and dinosaurs.  Hence, a Tiny Boy’s Costume.

Kind of interesting that searching for "tiny costume" doesn't pull up any labelled 'girls', but there are some simply labelled 'toddler'. Seems like an odd reverse of the usual 'boys are normal' trend--perhaps because Tiny is female?

The placement of the costume in the 'boys section' was probably done by someone at the costume company who had never seen the show (I know this just proves your point---they assumed dinosaur=boy) and is not a reflection of the Dinosaur Train program. I wanted to mention how great the show is, however. My son loves it and I LOVE that of the 4 main characters, 2 are boys and 2 are girls. The show itself IS very inclusive of girls and promotes science to them.

The costume company doesn't describe this costume as being for girls or boys, it's just the "Tiny Deluxe" and comes up when you select "unisex" under toddler costumes. http://californiacostumes.com/productdisplay/tiny-deluxe-0

The same applies to the Buddy costume. http://www.amazon.com/California-Costumes-00009-Buddy-Costume and http://californiacostumes.com/productdisplay/buddy-deluxe

And while you worry about trivial stuff like this, engineers, farmers, scientists, and truck drivers do useful work.

Congratulations on getting paid for something so silly.

This might have more to do with how boys tend to like dinosaurs more. Blame that on gender ideology if you like, but the company wouldn't mind selling girls' Tiny costumes in the slightest.

Man, if that costume had existed when I was a little girl, I would have thrown a hissy fit until I was allowed to be the dinosaur. Especially if I was then allowed to make it look scarier. (I was a vampire as a little girl. Knowing that Kool-Aid would stain my skin, I drank some red Kool-Aid at the last minute. This worried my mom, but meant that my Dracula outfit was that much more realistic.)

As the parent of a toddler, I actually hate dinosaur train anyway. They do a less bad job on average than other kids shows on gender issues, but they still perpetuate really annoying gender norms with the parent characters and occasional random story lines about mating replete with 50s style courtship among the dinosaurs. And their science involves time travel and dinosaurs riding trains, so....

UGH. As a die hard feminist, WHY DOES THIS MATTER? If you have a girl child that wants the costume a girl can still wear it. It's the internet equivalent of a typo, it's not the like the costume disintegrates in your hands if someone without a penis wears it. If the company was refusing to sell it to girls I would understand. I get the argument here, It's labelled boys, but why does everything like this need to be an issue. Yes we should probably have "children's" costumes instead of boys or girls specifically, but there is nothing here that says the costume can't be worn by a girl. The internet is an imperfect place.

I don't recommend letting your kid dress up as a dinosaur because the child may go insane with power - http://hyperboleandahalf.blogspot.ca/2013/10/menace.html

Non-issue based on misrepresentation of facts. Please take your study more seriously.

The only difference is that Amazon called it a "boy's costume". Note that Amazon often names the products themselves by description unless the producer specifies what to call it, meaning that it is entirely their own interpretation. In other words, the assumption that it's for boys only because "dinosaurs are for boys" is entirely your own fabrication. For all you know they just called it a boy's costume because the ad picture had a boy in it. Would that thing look any different with a girl in it?

A pterodactyl is not a dinosaur, by any definition.