UPDATE: I may have been wrong about this one and, if so, I apologize.  The Univ. of Alabama has released a statement saying that the image is not photoshopped, including a quote from the student saying “It’s kind of funny, but people are blowing it out of proportion a little bit.”  If anyone has further information on this story, please email it to socimages@thesocietypages.org.

In 2000, the University of Wisconsin – Madison was sued by a man named Diallo Shabazz.  Because the college wanted to present itself as a diverse place, Shabazz, a black man, had been featured in university marketing materials for several years.  That year, however, his face was photoshopped into a picture of a crowd at a football game.   He complained, but was blown off.  He’d had enough.  In his lawsuit, he asked not for a settlement, but for a “budgetary apology”: money dedicated to increasing the actual diversity of the campus.

Today @EricTTung sent us another example of this kind of doctored diversity, currently the first slide on the homepage of the University of Alabama.  Do you see it? 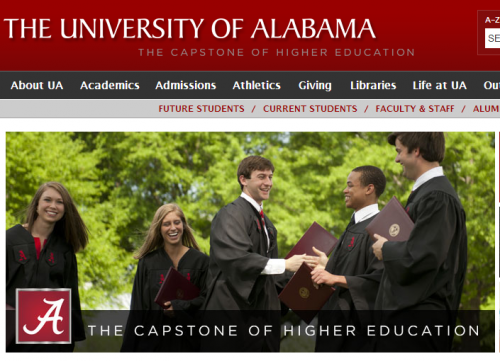 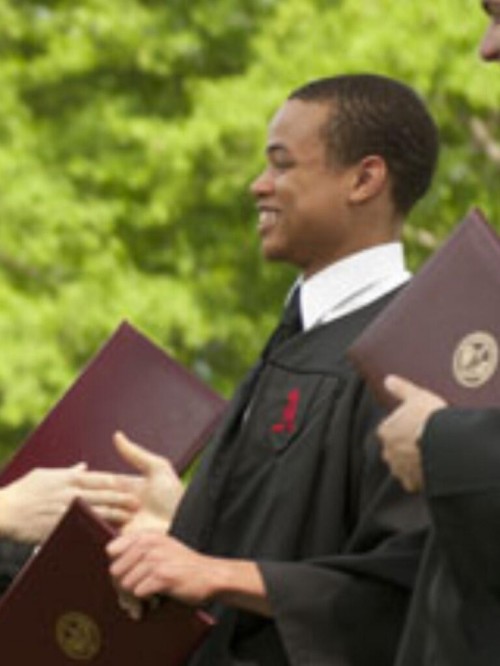 Note the skin color of the African American man’s hands.

As I’d written in the post about Shabazz, this teaches us both that colleges believe that diversity is a useful commodity with which to market their institutions and that, “if real diversity isn’t possible, cosmetic diversity will do.”

Recruitment of minorities to a mostly white campus: tricky.  Addressing the systematic educational underinvestment in minorities prior to arriving: expensive.  Retaining minorities in that environment: challenging.  Photoshop: easy.

Actually, to me, that looks like his hand in the foreground, holding the diploma. It's the hand in the background, with the thumb up, that looks weird, mainly because proportion seems off.

In related stories, my alma mater put a Black student on a financial aid brochure, and cut his father out of the photo, when he hadn't even received financial aid: http://www.splc.org/news/report_detail.asp?id=283&edition=10

I work in admin at a university. A coworker (who is a visible racial minority) participated in a photo shoot for communications/recruitment. Like me, she's support staff, not an instructor/faculty. But she was wearing a blazer that day, so they shot her in "professorial" poses and now her image is on banners and bus shacks from here to kingdom come, looking like a prof. Believe me when I tell you that you can literally count the women of colour faculty at our institution on one hand and have fingers left over.

Well, I could be wrong, but I believe, uh, diversity is an old, old wooden ship that was used during the Civil War era. - Ron Burgundy

This video proves that this photo is not photoshopped: http://vimeo.com/75987385.

it's not a photoshop, there's even a video where you can see him towards the end jumping with the other graduates. please take this down or update it to let people know that you made a mistake:
http://vimeo.com/75987385

If they did not photoshop his head, then they darkened his complexion

Lisa, once again, as ever, you score with a deft turn of phrase: Recruitment of minorities to a mostly white campus: tricky. Addressing the systematic educational underinvestment in minorities prior to arriving: expensive. Retaining minorities in that environment: challenging. Photoshop: easy.

It doesn't make any sense to me that it would be photoshopped. If you're creating a staged PR photo--which this was always clearly meant to be--it's a simple enough matter to find a single African-American student to stick in your tableau. No, Alabama has no reason to pat themselves on the back about diversity, but you should be more careful about making such definitive accusations without checking the facts.

While this may not have been completely accurate the fact is universities should be enhancing their diversity and not doing a "performance" which is unethical. As one faculty who appeared in many publicity brochures for a private liberal college that was not diverse, i have seen this game up close....

And this (the mistake this article made) is why it is stupid to make any judgments based on color. Let's leave all that behind and really make this a post-racial society!

Ah, the perils of looking for something to be offended by. And the subtle racism of not knowing that skin color can vary from hands to face or based on lighting. Assume the worst! It's time to be offended!

This Lisa Wade needs to actually go out and meet some black people, instead of just writing about heteronormativity and intersectionality of oppression. Your hands aren't necessarily the same color as your head, and just the lighting can make one part of your body appear lighter in a photograph. The more you know...

If this blog is truly looking to "inspire sociological imaginations everywhere", perhaps it should do a follow-up post investigating the ingrained assumptions on the part of its writers that lead to mistaken posts like this one.

If ever there comes the time when the world doesn't really care about race anymore, having a picture full of white, black, or whatever color person wouldn't be an issue anymore. There wouldn't be a "need" to showcase diversity because it's already all around us.

As they say on The Simpsons "HA ha".

[…] to the Society Pages, his lawsuit asked not for a settlement but for a “budgetary apology” in the form of […]

So wait. Someone tweeted you this picture, and you ran with it without doing any sort of investigation? What's your PhD in? Sucking at Research?

And having been to the campus in Tuscaloosa, it's not lily white, even taking the football team into account. I used to do a lot of work on that campus, and while it may be a majority white campus, it really is not the George Wallace days anymore.

What in the world would you expect Alabama to integrate?!?!?!

May have been wrong? How about "I was wrong. Sorry.". Sheesh.

Well he has the right to sue for people using his image without permission, but the other stuff is just race hysteria nonsense you see with Americans. I bet if they HADN'T photoshopped it this author would complain that there weren't enough black people and diversity in the picture.

Maybe get rid of the "PhD" next to your name if you're not going to research an article before you write it. Especially one that calls someone out.