Lindy West for the win at Jezebel, asks what’s so sexualizing about calling a child’s costume “naughty.”  The costume below was widely criticized for sexualizing little girls, but West nicely observes that there is a non-sexual, child-related meaning to the word naughty.  You know, being bad.  The non-sexual version of bad.  Doing something you’re not supposed to do.  A non-sexual thing.  You know what I mean!  West writes:

Sure, naughty has had sexual connotations as far back as the mid-19th century, but it’s been used to describe disobedient kids since the goddamn 1600s. So why did we let hornay college chicks hijack the word in all its forms? Why can’t children be naughty anymore?

The instinct that “naughty” means “bad and sexy” probably stems in part from our Puritanical roots.  Today it gets tied up with the infantilization of women and the notion that women should be cute like girls.  Add the rampant sexualization at Halloween, including costumes in which women dress up like little girls dressed up like sexy adult women.  It’s hard to see how one could avoid interpreting this “naughty leopard” as an example of the sexualization of little girls. 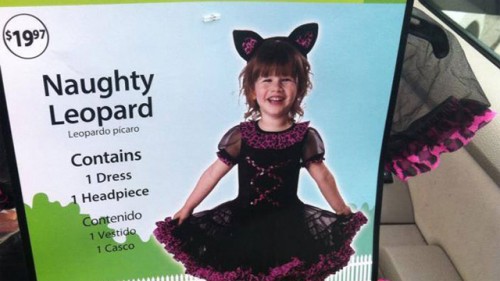 Nevertheless, West is right.  The biggest problem with this costume’s title is that it includes the word “leopard.”  Because that’s just false advertising.  It doesn’t say sexy leopard and the dress — I’ll stop calling it a costume now — is not particularly sexualizing.

Why don’t we send “naughty” back from whence it came—into the realm of wedgies and spitballs and pies cooling on the windowsill with bites taken out of them!? It’s time, people. You know it is. Take Back the Naughty. For the children.

And for the grown ups, too, who are tired of the idea that being a sexual person makes us bad, bad girls and boys.

...Since when are dresses not costumes? Is there an Official Rulebook of Dress Up that I'm not familiar with?

This article has been around since September. It raises interesting issues about clothes, language etc., but West neglects to mention that the criticism surrounding the t-shirt was probably unwarranted. "Naughty" is still commonly used in other English-language speaking cultures without a sexual connotation. Even many dictionary definitions do not include the sexual connotation; the connotation is mostly informal and regional.

Therefore, it is easy to further assume that people who learn English as a foreign language will not learn it as a sexualized word, perhaps not even those learning English within the USA. Judging by the Spanish on the packaging, using the word "naughty" here was most likely innocuous, similar to the unintentionally funny or disturbing messages in a particular language on clothes/items made by non-native speakers.

An observation: the Spanish translation on the package is "leopardo pícaro". "Pícaro", while meaning naughty or sly, can also mean sexually precocious. There you go.

there is nothing particularly naughty about this leopard in the traditional meaning of misbehaving. this kid doesnt even look mischievous. why doesn't it just say 'leopard'?

this is a real question. if the naughty part has nothing to do with the costume, and it clearly doesn't, why is it there?

I still think it's likely at least a reference to the girliness of the outfit. if I bought a blind box costume marked leopard and I got this instead of a furry bodysuit I'd be -pissed-. if 'naughty' differentiates this from a straight up leopard suit, then it's referencing the sparkles and skirting. those aren't sexualizing in themselves, but if making a panther into a dress means it's now 'naughty, it is sexualizing.

Isn't it limited to AE? If I think of "naughty" in BE terms, I am thinking of a younger child who is, well, being naughty. Any S/M connotation will come second, if at all.

Why don't they just call it the "Love Child of a Leopard and the Pink Panther" costume?