Resistance to the “Redskins” Mascot: Racism in Perspective

The Redskins have been in the news lately — on the front page of the Times, for example — and not for their prowess on the gridiron. It’s their name. Many native Americans find it offensive, understandably so.  “Redskins” was not a name they chose. It was a label invented by the European-Americans who took their land and slaughtered them in numbers that today would be considered genocide.

President Obama offered the most tepid hint of criticism of the name. He did not say they should change their name. He said that if he owned the team, he would “think about” changing the name. But that was enough for non-Indians to dismiss the idea as yet one more instance of “political correctness.”

In response the National Congress of American Indians offers these possibilities.  The Cleveland cap is the real thing.  The other two are imagined variations on the same theme. 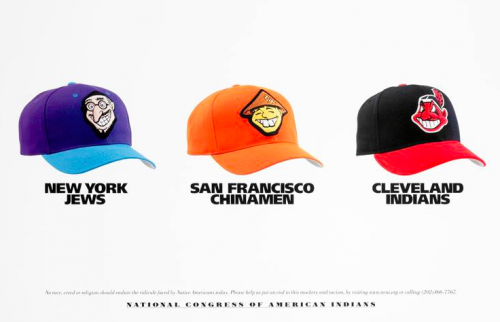 The pro-Redskins arguments could also apply here. The New York Jews and San Francisco Chinamen and their logos are not intended to offend, and a survey would probably find a majority of Americans untroubled by these names and logos.  And those who do object are just victims of “the tyranny of political correctness.”  This last phrase comes from a tweet by Washington quarterback Robert Griffin III, an African American.  His response seems to make all the more relevant the suggestion of years ago by the American Indian Movement’s Russell Means: “Why don’t they call them The Washington Niggers?”

as per slate http://www.slate.com/blogs/browbeat/2013/10/10/new_york_jews_san_francisco_chinamen_cleveland_indians_ncai_poster_is_old.html?wpisrc=burger_bar the image is actually from 2001 http://www.coloribus.com/adsarchive/prints/racial-equality-mascots-3062005/

There is a school in WI that use "chinks" as a mascot. The mascot used to be a person, but has since been replaced with a dragon. Because that's supposed to make it better?

Wow. You can't even bother to use Native American, and instead use "native American". Just. Wow. And then couple that with "real Indians". Real? Are you kidding. This post is offensive enough.

This is great - I'll make sure to include it in the comments on Jennifer Guiliano's piece "The Frustration and Fascination with Native American Mascots." It offers a lot of mascot history and sociology. http://thesocietypages.org/specials/mascots/

Redskins fan here. Like most fans of the team, I don't want the name to change. I was ten when they won their last Super Bowl, and I associate positive feelings with the name. I love the fight song, and don't want that to change.

Should the NAACP to rebrand itself, since "colored people" can be used offensively? What about the United Negro College Fund? Are the names of these organizations disparaging the very people they aim to help?

Is there anything inherently demeaning about having reddish skin? "Redskin" by itself doesn't insinuate any negative traits; on the contrary, the fight song sings their praise as brave, valiant, victorious warriors. Redskin alone is neither positive nor negative, similar to how calling someone blonde isn't labeling them a "dumb blonde."

You know there are the 'Fighting Irish' whose mascot is a leprechaun ready to fight since you know the two things the irish are most known for are fighting and being leprechauns - wish they could've gotten drunk in there too would've made it compete. Should we change the fighting irish too? I'm irish by the way.

Racism in Perspective: Resistance to the Washington Redskins' Mascot — December 23, 2013