Economic Mobility and Education in the U.S. Today

The phrase “economic mobility” refers to the likelihood that a child will end up in the same or a different economic strata than their parent.  Education is usually cited as a key to improving economic well-being intergenerationally. Conversely, but often unstated, is the idea that if a child of college graduates doesn’t attend college, than they should perhaps do worse than their parents.

What does the data say?

The figure below is from the Pew Economic Mobility Project.  Along the horizontal axis is the parent’s household income quintile: economic strata broken up into fifths from the lowest (left) to highest (right).  The bars represent the adult child’s income for those who didn’t graduate from college (red) and those that did (blue). 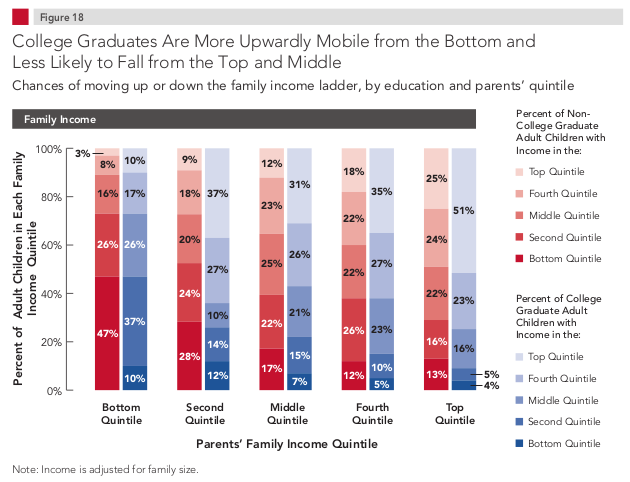 Often we focus on the left side.  Does attending college help poor and working class Americans?  The answer is yes. Only 10% of children born into the bottom 20% of household incomes will grow up and stay in the bottom 20%, compared to almost half of people who don’t go to college.    It’s similar, if less stark, for those in the 2nd to bottom quintile.

But what about the rich kids?  I want to look at the right side.  Notice that a quarter of kids born into the top quintile stay there even if they don’t get a college degree.  Half of non-degree earning children will stay in the top 40% of income earners.

Among the richest kids who do go to college, about 50% will remain in the top quintile.  There are lots of reasons for this, but one is paternal connections.  One study found that a whopping 70% of sons of the 1% had worked for the same employer as their father.  I wonder how high that number would be if we added daddy’s friends?

In sum, it’s hard to go up from down below, but it’s also relatively easy to stay sitting pretty if you’re already way up there.

Via Matthew O’Brien at The Atlantic. Cross-posted at Pacific Standard.

Economic Mobility and Education in the U.S. Today | MemePosts — October 12, 2013

The wheel is oft discovered

Data are odd. According to these, if you get a college-education, then your odds of climbing to the top quintile is HIGHER if your parents where second quintile than if they where third or fourth. That doesn't sound plausible to me.

I find it interesting that you use the term "daddy" when describing the "rich kids" situation. Would you have similarly described the father of someone born into the bottom quintile? Similarly, you use the term "rich kids" but never "poor kids." While it may seem like I'm playing devil's advocate here, your language is reminiscant of the social acceptability of saying "African-American" versus "white." It, to me, feels as though it's ok to almost talk down when referencing those in priveledge. But, when speaking of those who are not, one must walk on eggshells.
Just a thought.

ECONOMIC MOBILITY AND EDUCATION IN THE U.S. TODAY | Welcome to the Doctor's Office — October 15, 2013

One study found that a whopping 70% of sons of the 1% had worked for the same employer as their father.

[...] The Sociological Images blog posts about the Pew Economic Mobility Project. Consider it marked “to read”. [...]