If I have one thing to say about Holly Grigg-Spall’s new book, Sweetening the Pill: How We Got Hooked On Hormonal Birth Control, it’s that it brings together ideas in creative ways and comes out with conclusions that are new to me.

The book is an interrogation of the popularity of hormonal birth control in the U.S.  In one argument, Grigg-Spall begins with the fact that women’s bodies are a fraught topic. For hundreds of years, the female body has been offered as proof of women’s inferiority to men.  Feminists have had two options: (1) embrace biological difference and claim equality based on essential femaleness or (2) reject difference and claim equality based on sameness.

Largely, Grigg-Spall argues, the latter has won out as the dominant feminist strategy. Accordingly, all things uniquely female become suspect; they are possible traitors to the cause.  This includes ovulation, menstruation, and the mild mood swings that tend to accompany them (men have equivalent mood swings, by the way, they’re just daily and seasonal instead of monthly-ish).

Hormonal birth control, then, can be seen as a way to eliminate some of the things about us that make us distinctly “female.”  “Science is making us better,” the message goes.  By getting rid of our supposedly feminine frailties, “we are [supposedly] becoming better humans…”  A quick look at birth control pill advertising reveals that this goes far beyond preventing pregnancy.  Commercials frequently claim other benefits that conform to socio-cultural expectations for women: reduced PMS, clearer skin, and bigger breasts.  This Yaz commercial, for example, claims that the pill also cures acne, irritability, moodiness, anxiety, appetite, headaches, fatigue, and bloating. 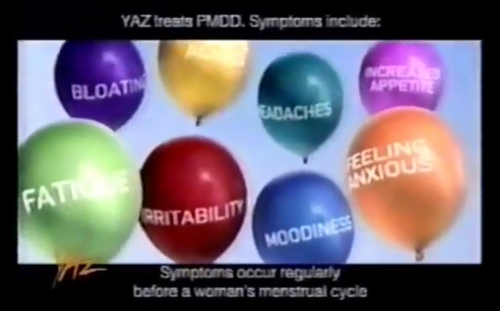 To add insult to injury, Grigg-Spall notes, advertising then frames consumption of the pill as liberation.  In this commercial for Seasonique, the pharmaceutical company positions itself as women’s answer to a mysterious oppressor.  “Who says?” is repeated a full eight times.

Others have criticized Grigg-Spall for, among other things, essentializing femaleness: utilizing  that strategy for equality that embraces women’s difference from men and asks others to do so as well.

I’m coming down on the side of “huh!?”  The Pill made an immeasurable difference for women when it was introduced as the first effective, female-controlled birth control method.  There’s no doubt about that.  Her book asks us whether our designation of The Pill as a holy pillar of women’s equality still applies today.  I think it’s worth thinking about.

So, to be feminist, I have to experience "acne, irritability, moodiness, anxiety, appetite, headaches, fatigue, and bloating?" Eww.
In all seriousness, the idea that to be truly equal we have to change the functioning of our bodies is...icky.

Irritability, moodiness, anxiety, appetite, headaches, fatigue, and bloating. Clearly none of those things are restrictive or oppressive in any way. As someone with a body that does not function well enough to let me do most of what I'd like to do even without period symptoms, I don't see any problem with framing this sort of thing as the body's oppression of my spirit. Severe allergies, asthma, medical problems, arthritis, the flu... they could all be characterized the same way without it being a gender issue. It's about pain and suffering being cast as negative; hardly controversial.

Somehow, I don't see "acne, irritability, moodiness, anxiety, appetite, headaches, fatigue, and bloating" as part of my essential "femaleness", whatever that means. Plenty of people who are biologically female don't have to deal with that crap naturally, but I should because...?
Frankly, I think "(1) embrace biological difference and claim equality based on essential femaleness or (2) reject difference and claim equality based on sameness," is a false dichotomy. I don't have to reject my biological differences from others or pretend we're all the same in order to insist on equal rights. (Where does this argument leave people who aren't biologically "male" or "female", anyway?)
It is, however, true that we are all the same insofar as we are human beings - and we all deserve equal treatment in the societies we've formed.

While I think it's definitely relevant to look at the way the pill is promoting and the way that advertisements are framed, I don't think that this ultimately makes a strong enough case for accepting most of the claims that Grigg-Spall makes in her book. Besides essentializing femaleness (and this is a real problem with the text--Grigg-Spall asks, for instance, “If we shut down the essential biological center of femaleness, the
primary sexual characteristics, then can we say that women on the pill
are still ‘female’?” So apparently postmenopausal women, pre-adolescent girls, and transwomen are only questionably female.), Grigg-Spall also makes inaccurate or misleading claims about the effect of the pill on health, and suggests that unintended pregnancy should be regarded as a happy accident and women who don't desire to become pregnant should practice abstinence and thereby combat the myth that women must always be sexually available. Because women who want to actually have sex, instead of simply "making themselves sexually available" to a man, do not, of course, exist.

That much said, I think that the problem with many feminisms that claim to "embrace biological difference and claim equality based on essential femaleness" is that instead of embracing equality of opportunity for women and men, they tend to construct a vision of women's equality that looks very different from men's equality--and then tell women that they are wrong if they claim not to want this equality, regardless of what women themselves say. Grigg-Spall seems to think that women are wrong if they weigh the side effects and health risks of the pill and decide that, after all, the freedom to have sex and still be able to choose when they will have children is more important to them than an increased risk of breast cancer later in life. Women, she argues, would be happier if they simply embraced the functions of their "natural" bodies. This may be true for some women, but it is certainly not true for all of them. I think that a feminism that embraces women's differences, both biological and experiential, is completely necessary, but this feminism needs to do two other things: embrace equal of opportunity, and embrace the differences between individual women. Women are not all the same, just as men are not all the same, and women's equality, if it's ever achieved, is probably not going to be monolithic, because there is no one path that is a perfect fit for all women.

Accordingly, all things uniquely female become suspect; they are possible traitors to the cause. This includes ovulation, menstruation, and the mild mood swings that tend to accompany them

This lady needs to be introduced to Dianic Wicca. I'm just sayin'.

I understand that USian medicine commercials are absolutely ridiculous. Here (at least in Spain) you can't advertise medicines that aren't OTC, and birth control isn't.

FWIW, I have PCOS and take the pill to treat it. I'm all for science here.

"acne, irritability, moodiness, anxiety, appetite, headaches, fatigue, and bloating" - why does having a menstrual cycle mean these things? Sure plenty of women experience these symptoms, however there are ways of preventing these problems without suppressing the entire menstrual cycle. Many women don't experience these things, in fact many go on the pill before even fully knowing how their cycles effect them...with teen girls going on the pill for anything and everything, without enough knowledge to make that choice or understand implications. Suppressing cycles is the thing to do, often not out of necessity or from an educated choice.

So, let me get this straight, if I'm not okay with monthly bouts of severe depression, insane exhaustion, acne, cramps that would kill a bull moose, increased stress and increased anxiety, all things which make me hate life, I'm giving in to some kind of patriarchal norm rather than trying to make myself more comfortable? And I should embrace that because it's part of what makes me a woman? L-O-M-Fing-L. These things are not mild for me, I can sleep 16 to 18 hours at a stretch when I'm having my period and I pop Advil like it's going out of style to deal with the pain, I can't take birth control pills, but if I could, I would be all about one that would take care of those symptoms for me. It's not even about men, it's about me. Grigg-Spall can get bent.

I use the pill to eliminate my need to menstruate. Menstruation is considered a pretty core pillar of cis womanhood. But I don't do it to be more male, I do it 'cause it is a messy, smelly process that restricts my freedom (of clothing, sexual activity, etc) and if I can experience that less often without sacrificing my reproductive reliability, why not?

The argument only works if one thinks women are meant to suffer and are somehow less feminine if we choose not to. My "femaleness" isn't between my legs, it's between my ears. It doesn't matter that women are (usually) born with female reproductive organs, we are also born with BRAINS, giving us the ability to make our own decisions, like any person. I could harve my uterus out and be every bit as female, and probably quite a lot happier to be so.
I find attempting to define women based on their fertility very misogynist.

The birth control pill is another symbol of female oppression. Women shouldn't have to apologize for being female, and having a baby should not be framed as a huge mistake or something to avoid. Fertility is a beautiful gift, and being able to have a baby is something almost supernaturally awesome! As maybe the only woman in Canada who has not used birth control for most of my 19 years of marriage, i can tell you, i feel like the only free woman in the country. Why should i wreck my body/hormones and the water supply with my peed out artificial hormones to please a cultural norm when my body wants babies, i love babies and my husband loves me?

- one more thing - what is the difference between women being on "the pill" and men being chemically castrated? And why do so few men choose the chemical castration, but so many women are willing to put up with the side effects of the Pill?

while I do think the pill is marketed in fucked up ways, part of that is because American culture has trouble with people who don't want babies. there's never ads for any BC that is like 'don't want kids? use BC!' condom ads are all about sensuality, sometimes they talk about preventing disease.

One very underrepresented side of the birth control discussion is that some women use them for irregular periods. In this case, it really is liberating to not be bleeding for three months straight.

Just voicing my opinion here, I think I might settle for getting sterilized by partial hysterectomy (as in only keeping ovaries), the only permanent birth control, minus the "monthly gift".

[…] the pharmaceutical industry cannot be ignored. Many people are understandably concerned with how hormones affect their bodies and brain chemistry. These concerns are often dismissed.  Yet, in the last year a male birth control study was […]