Who is an American? Racist Twits and the Rest of Us

Two recent events had a strikingly similar theme.  Kenichi Ebina won America’s Got Talent and Nina Davuluri won Miss America.  In both instances, other Americans objected to their victories, claiming that they were not really American because Ebina and Davuluri are of Japanese and Indian origin respectively.   Still other Americans objected to this reaction.  And yet, as I’ll argue below, most of us share their bias.

First, thanks to Public Shaming, we have examples of the reaction on Twitter.  Reactions to Ebina’s win: 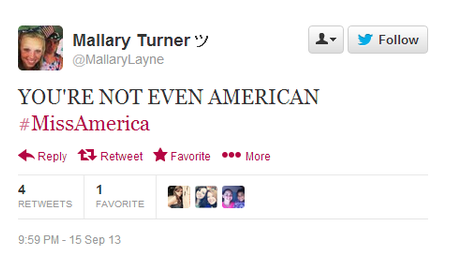 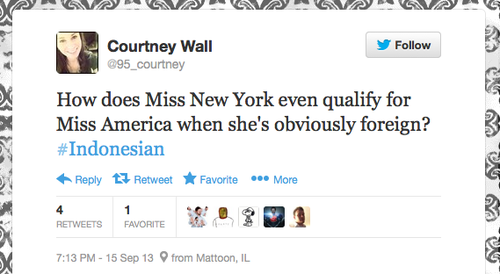 These are stark examples of people who believe that only white people count as American.  It’s a bizarre position, of course, because people of European descent are immigrants to America, and an overtly racist one as well.  I don’t lose any sleep over publishing their identities on this blog.

But, the truth is, the majority of us — even those of us who oppose racism and embrace the idea that the U.S. is a nation of immigrants — hold the belief that America = white.  We just believe this subconsciously.

Project Implicit is an online psychological test that measures implicit beliefs, ones we hold that we’re not necessarily conscious of holding.  One test is of the association of Asian-ness with American-ness.  It works by measuring how long it takes us to sort Asian and European faces and American and Foreign famous sites into the proper categories. 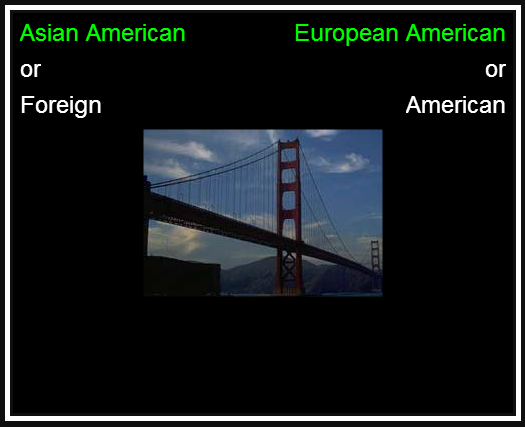 Then they switch the bottom designations so that Asian and American are on one side and European and Foreign are on the other.  For most people, the harms their ability to sort faces and places: it slows down and includes more errors, revealing that their brain implicitly sees Asian and foreign as one category and American and European as another.

Here’s the aggregate data.  Almost a quarter of people make no association either way, 60% implicitly believe that Asians are less American than Europeans, and 17% think the opposite. 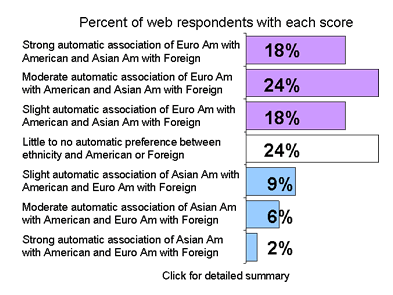 The take home message is: even though it’s easy to condemn the twits making overtly racist comments, this is a problem that is much more pervasive and pernicious.  Even those of us who are horrified by those tweets likely carry the bias behind them.

Seeing as every single "foreign" location picture used in the test was actually in Europe (the only two exceptions being the pyramid and the Sydney Opera House) I wasn't very surprised when my results came back:

It was very easy to classify the images of people/places as European (plus Egypt and Australia) vs Non-European, so I was surprised to find that my classification was such a rare outcome in the general population.

I'm sure I would have had different results if they had included The Great Wall of China or the Taj Mahal or some other Asian location in the "foreign" category.

Well... yes, to a degree... but it's not something people are just making up. It's standard statistical inference - the median US person is white, and has been for as long as the US has existed as the US. Our government, language, and culture are most heavily influenced by European settlers. American culture certainly has had many great contributions from people of other ethnicities, but the core is and has been "white."

Moreover, "white" people have been in the US settled areas in numbers longer. My ancestors have been in the US since the 1600's. Chinese and Indian immigrants came as a later wave at the end of the 1800's, and as a minority culture. The same thing with the Irish, Italians, and Polish waves of immigration... there's a reason that "white" doesn't just conjure up "European-American", but more strongly "Protestant Anglo-American." Because they largely started the colonies and founded the government. So American has a long history of being European American just from demographics... there are half as many "English" people living in the US as live in England.

So.. it's incredibly heinous to see other ethnicities as not being American, or not allowed to represent us because they don't fall near the statistical norm... but I don't think we need to see it as some hideous bias that we take longer to process outliers from that norm as still being a part of the set.

If I say "leaf" and you think "green" that doesn't mean you don't acknowledge purple leaves, just that they're obvious outliers.

They're not testing you, they're testing 'everybody'. Mismatches in tests occur, but I would expect (if they want tenure) that they balance it out so that every permutation has enough of a statistical evidence base.

So yeah, my 'Do you think Hitler is better/worse than Gandhi' test is a bit weird, but that's stats for you. *nods sagely*

Interesting situation. I wonder though if this reaction could better be classified as xenophobic rather than racist (not that one is better or worse than the other). Had these contest winners been African American, for example, there may have been some generally racist tweets out there but I suspect that there wouldn't be the same "not really American" dimension to it simply because even the most unenlightened people out there do not tend to associate black skin with first generation immigration. I wonder how these same people would have reacted to a Latino winning. Would they have just as quickly questioned their citizenship or is there something unique to Asian Americans that triggers an assumption about immigration status in certain people?

Here's a very relevant story: Professor Prabhjot Singh who is Sikh and wears the traditional Sikh turban and beard, was recently attacked in an apparent hate crime in Harlem. Professor Singh's response to this very frightening attack has been extremely courageous and I encourage everyone to read his statement here: http://www.nydailynews.com/new-york/hate-victim-prabhjot-singh-feeling-gratitude-article-1.1466721

But one of the things that he has called for in the wake of this attack is to have "a real national conversation around who looks American, what does it mean to be American" http://www.huffingtonpost.com/2013/09/22/prabhjot-singh-sikh-columbia-hate-crime_n_3972449.html

He has previously written about anti-Sikh violence, particularly after the massacre that occurred at a Sikh temple in Wisconsin a few years ago. http://www.nytimes.com/2013/09/24/nyregion/chronicling-anti-sikh-violence-and-now-a-victim.html?_r=0&gwh=7A2A116D0AD897C5EA0C223B1D23BF9D

I think these recent tweets about Miss America and America's Got Talent also help illuminate the whole "birth certificate" conspiracies about President Obama. Within a racist imagination someone who looks the way Obama looks and who has a name like Barack Obama simply cannot be a "real American" or a legitimately elected president. It also doesn't help that Obama was born in Hawaii which has a predominantly Polynesian population thereby making it suspect as a "real American" state, a little bit "less American" than the "normal" continental United States.

On the one hand, I'm grateful for Project Implicit. For most of my life, I assumed everyone was a little racist, so I was pleased to find out some people aren't, and that I'm among the surprisingly large number of white Americans with a preference for dark folks.

Thinking America = white may be a chain reaction from thinking that Europe = white as well. POC have been routinely white-washed out of history, or evidence of them existing not as slaves but actual members of society have been largely ignored. There's actually a great site that shows the multiculturalism of Europe from the 1700s and before:
http://medievalpoc.tumblr.com/

It really blew my mind because I always just assumed blacks were slaves in Europe, nothing else. Then I see a place that points out numerous instances of black nobles in Europe, along with tons of examples of POC in European paintings and history. Their exclusion seems to have started when the slave trade began gaining momentum, in order to discredit Africans as completely inferior with nothing to contribute except hard labor. Then after historians just either ignored/explained it away, or it just never crossed their minds.

I wonder how many of these are posts by trolls knowing that someone (i.e. Buzzfeed) will be there to publish a list.

Before I read the whole article I thought, I could see how someone might have a rational reasonable objection to someone who wasn't born in the USA winning a Miss USA or America's Got Talent competition. Then I read the crazy racist tweets written by the crazy racist tweeters and realized it had nothing to do with national pride and everything to do with being a dumbass.

America really was almost all white - over 80% so - up until the most recent large scale wave of immigration.

The fact that many white people will be saying a lot of different things about this massive transformation of their country, including not very nice things, doesn't seem that surprising. Quite understandable actually, given that the new demographic direction the country is headed in wasn't a decision that the country made in any sort of apparently deliberate, much less, democratic way. Outrage in this case is to miss the forest for the tweets.