Does Europe Have a Sex Selection Problem?

Excess under age-60 female mortality in less developed countries is estimated to add up to 3.9 million missing women worldwide (World Bank, 2011).  A large proportion of this is due to sex-selective abortion practices.  The practice occurs most commonly among poorer families in societies where boy children are given greater economic and social status than girl children. In such a context, the transition to smaller families can lead parents to choose boys over girls. Notably, female fetuses are most likely to be aborted when the first child born is a girl.

The table below shows the countries with the most skewed ratios at birth in the world. While there is naturally a slightly higher sex ratio of boys to girls — between 1.04-1.06 — ratios above that are considered to be altered by technology due to gender preferences for boy children. 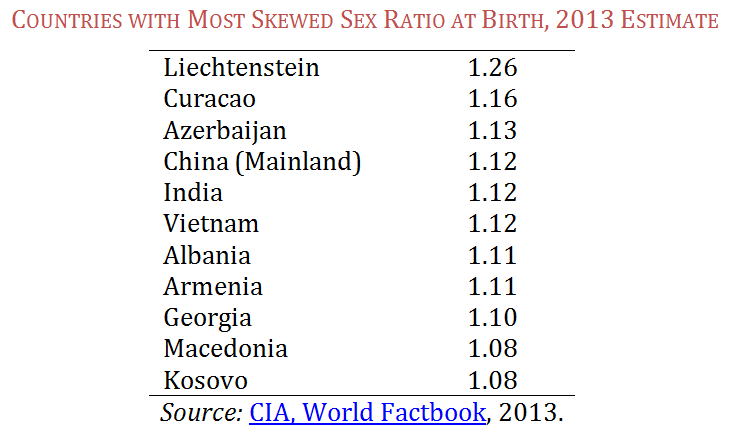 The reason we find this newest 2013 data of particular interest is that, despite the popular Western focus on Asia, the practice occurs in more European countries. Perhaps most striking is the central European country that ranks at the top of the list—Liechtenstein. This strikes us as odd, given that Liechtenstein has never made this list in the past. Perhaps this is a data collection error (in very small populations, as also in Curacao, the results can be skewed). But we are surprised that no journalists have picked up on the fact that the worst offending son-preference country in the world is now, allegedly, a European country.  We contacted the CIA to ask them about this possible data anomaly but have not yet heard back.*

On the other hand, if the Liechtenstein data is accurate, this would be a very interesting story indeed, especially since Liechtenstein has the most restrictive laws against abortion in Europe.  A quick scan of gender equity policies in Liechtenstein shows that women there were not legalized to vote until 1984, indicating that it is not the most gender egalitarian of European countries.

In any case, whether Liechtenstein’s inclusion in this disreputable list is a data error or not, the other European countries on the list are legitimate.  They have been high for many years, and a recent report on Armenia, for example, documents longstanding norms in gender preference.  The disproportionate focus on birth sex ratios in China and India no doubt reflects their status as the #1 and #2 most populous countries, which means a much greater overall impact in sheer numbers.  Nevertheless, our point stands.  Why has the disproportionate inclusion of non-Asian countries on the above-list gone virtually unmentioned by journalists?

Americans often think of parental sex preference as a thing of the past, or a problem in developing countries. After all, the U.S. sex ratio at birth falls in the normal range, at 1.05. This is in spite of the curious American cottage industry in sex-identification home use kits, such as the Intelligender, the GenderMaker and the Gender Mentor.

In surveys, American parents report an ideal of two children and equal preference for boys and girls. However, American gender preferences manifest themselves in more sneaky ways. A 2011 Gallup poll showed that, if they were only able to have one child, the highest preference was for a boy.  These results are little changed from the same Gallup question asked of Americans in 1941.

To return to a point made in an earlier post on skewed sex ratios, Americans may not be so different, after all, in their gender preferences from the countries in the above table.  The crucial difference, she noted, is that some Asian countries are more enabled to act on their boy preference than others. It appears we should now be including some European countries in that “enabled” group as well.

* Neither the United Nations, Population Reference Bureau, nor the World Bank have published 2013 statistics yet for comparison to the CIA data.

Surely it is statistically irresponsible to compare the results of countries such as Liechtenstein (<40,000 pop.) or Curacao (1.35billion pop.), without noting that smaller countries will have a much greater level of variance in their results than larger countries will and that they will be much likelier to represent outliers in any such comparative analysis.

A quick scan of gender equity policies in Liechtenstein shows that women there were not legalized to vote until 1984, indicating that it is not the most gender egalitarian of European countries.

Sorry, but the logical failure here is troubling on multiple grounds. First is the syntactical failure. Women were given the right to vote 29 years ago. Without any additional corroborating social evidence to support your following claim of gender inequality, at best, you can say, "... indicating that it has not historically been the most gender egalitarian of European countries."

This brings us to the second failure: whether the presence of voting rights for women is predictive of gender equality. We can look at lots of countries in which women have had the vote for decades longer than Liechtenstein and say - without a doubt - that they are definitely not gender egalitarian today (nor since they gave women the right to vote), and - for some - they weren't during all the years in which women had the right to vote. As such, voting rights alone are not a good metric of gender equality. Social assessments must be used to interpret the extent to which gender equality actually manifests itself within any society.

This brings us to the third failure, which is the apparent LACK of anything approaching a follow-up assessment of other forms of assessment of gender (in)equality that were actually in the document from CulturalPolicies.net that you linked to! For example, this is the paragraph following the statement that women were given the vote in 1984:

As a member of the European Economic Area (EEA) since 1995, Liechtenstein has adopted twelve directives on gender equality. In 1996, Liechtenstein ratified the Convention on the Elimination of All Forms of Discrimination against Women. Since then, vigorous measures have been introduced to implement the principle of equality. The Gender Equality Act of March 1999 was a milestone on the road to gender equality in the workplace. In 2002, the government resolved to progressively introduce gender mainstreaming and appointed a steering committee for this purpose. In 2006, Liechtenstein adapted the legislation to EU standards for gender equality in the workplace.

There's more at that link that talks about the actual, on-the-ground legislative actions that have happened since 1984. Not that difficult to do, and would definitely give more fodder for discussion than the strained transition statement of, "In any case, whether Liechtenstein’s inclusion in this disreputable list is a data error or not,..."

So, no. If you're going to talk about how bad Liechtenstein's data look, and if you're going to point out that women weren't given the vote until 1984, and if you're going to link to a source that validates that factual claim, you cannot then make the leap to it "indicating [Liechtenstein] is not the most gender egalitarian of European countries" in today's world of 2013, especially when voting rights alone are not a good predictor of gender equality, and especially when the very source that you cite actually makes the opposite claim from you by using facts and observations of social trends, policies, and laws.

Sorry, but this part of the piece fails on multiple grounds, is a completely intellectually dishonest representation of the source that you cite, and appears (at least to me) to based on nothing other than your own, unsupported assertion.

Maybe the focus has been on Asian countries because that fits in neatly with the "Non-European countries have backwards ways of thinking" narrative.

In case anyone is curious, there were 395 births in Liechtenstein in 2011:

The larger point here is that there are a number of European countries that have high SRBs beyond the obvious data error or wide variation of a small country like Lichtenstein, which the authors actually acknowledged.

Just because these countries are in Europe doesn't mean they are "developed western countries" comparable economically, socially and societally, to actual Western countries: France, the United Kingdom, Germany, Norway etc.

Georgia and Armenia are geographically located in Asia as well although ethnically, culturally, and historically, they are closer to Europe. The author should make sure to precise what she includes as a European country. As for Kosovo, it is barely a country at all since it is only recognized by part of the international community and the government in place doesn't hold authority on the entirety of the territory.

In any case, I find it irresponsible and misleading to represent Albania, Macedonia and Kosovo, Georgia and Armenia (is she included them in her obscure reasoning) as "Developed Western Countries".

Between the statistical failure (mentioned in the comments here), the geography failure (Armenia is not in Europe - nor is Georgia and Azerbeijan), and another factual mistake (Lichtenstain does not have the most restrictive abortion law in Europe - Malta has), it is undoubtedly the worst article i ever read on this site.

Azerbaijan, Georgia and Armenia are all members of the Council of Europe.
Membership is open to "any European state," but TMK denies
that they are European?

Even Europeans can't agree on what is geographically European, so it is not surprising that an American blog is stirring up territorial tensions. All three countries are part of Eurasia. They are both European and Asian.

As a (possibly not so) random point, I noticed that two of the pictured test kits visually place the word 'boy' above the word 'girl'.