Why Attend Sporting Events When the View is Better from the Couch?

Some sociologists went to the US Open final and posted about it on Facebook.  Here’s what they saw. Notice the size of the court.

I saw the match too. When I got home from work, I turned on CBS.  Here’s what I saw. 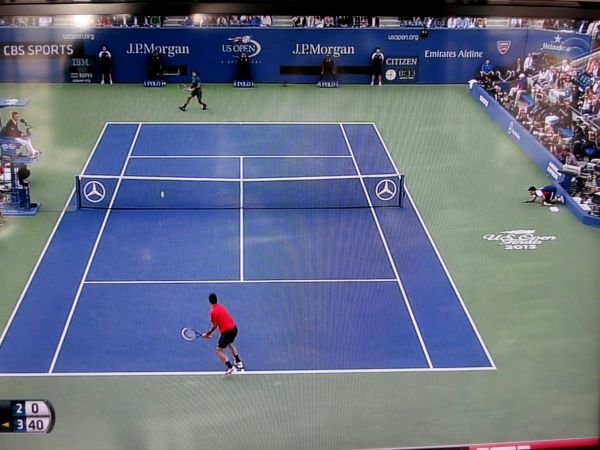 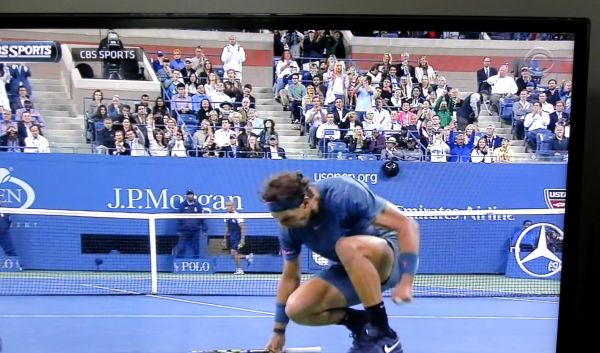 On my 40″ flat-screen Samsung, I could see the match as though I were in the box seats, nothing between me and the court. I could see the grimace on a player’s face, the sweat stains on his shirt. I sat on an upholstered chair. And it cost me nothing.

How much was a plastic seat in the top rows of Arthur Ashe Stadium? I don’t know. My grounds pass on Day 3 was $66.  Seats for the finals were $95. I have sat up there near the top. The players are colorful miniatures moving around on the green rectangles. The distant perspective allows – forces – you to see the whole court, so you are aware of placement strategies and patterns of movement you might otherwise not have noticed. But tennis isn’t football; strategy, especially in singles, is fairly obvious and not complicated.

From way up there, the players are so far away.  It’s as though you were looking at your TV through the wrong end of a telescope. You see the game differently, and you hear it differently. A player hits a solid backcourt shot, and for a noticeable half-second or so, you hear silence. Only when the ball is clearing the net do you hear the impact of the stroke.

Why go out to Flushing Meadow? It’s ridiculous to think about this in the narrow economic framework of money and tennis narrowly defined.  My $0 view of the match was far better than that of my FB friends in their expensive seats high above the court.  Close that micro-economics book and open Durkheim.  Think about the match as ritual. It’s not just about Nadal and Djokovic whacking a fuzzy yellow ball back and forth for a couple of hours. A ritual includes everyone. If you’re there, you are part of that group. You are one with the with the people in the stadium and with the charismatic figures in center court

That’s why, if something is a ritual, being there is so important. Showing up is more than just 80%. It’s everything. If you’re there, you are part of our group. You go to Thanksgiving dinner at Aunt Diane’s house not because the food is good.  You might get better food and more enjoyment at home with take-out Chinese and a TV.  You go because your presence defines you as a member of the group. Not going is tantamount to saying that you are just not part of this family.

The Final is not just any match. It is the ritual that anoints our king, hence the trophies and pageantry and ritualistic incantations (speeches) after the match.  I would guess that most of the people there yesterday would choose even a so-so final over a close, well-played match on an outside court in Round 3.  Because this match is so important, it generates more mana. And that energy is created by the crowd.   Of course, the crowd’s perception is that it is the players who are creating that special feeling, and it helps if the match on the court is close and well-played. But the same match – every shot exactly the same – played in an early round in a nearly empty stadium would not create that same feeling for the handful of spectators who showed up.

What makes the ticket worth all the money then is not the quality of the play. It is the symbolic meaning of the ritual and the strong feeling you get from being part of that ritual. You were there, with Nadal and Djokovic.  That ritual exists in sacred time, linked to other great finals matches.  So maybe you save your ticket stub or your program as your link to that sacred past.

I saw the same match, and I had a better view. But I’m not going to save my cable TV bill.

Well, economics actually does has a fair deal to say about the valuation of the ineffable experiences tied with an event in comparison to the mere tangibles of that event.

Why go to the theatre instead of watching the movie? Why go to a live concert - even Bruce Springsteen or the Stones at a football stadium -- instead of watching even Martin Scorcese's film of the Stones? Why go to a demonstration? Sure, because of the symbolic Durkheimian ritualism, the community, the feeling that you are IN history rather than watching it on your TV. The sense of surprise and adventure. But also the visceral sensation, the electricity of being there, with the players, at that moment in time, the tactile physicality of it. I watched the women's semifinals from the nosebleed section of Ashe Stadium. And I felt closer than I ever could in my living room. Don't ever discount the nonrational foundations of social life.

Showing up at the stadium isn't everything, it is a crazy waste of money, especially in the nose-bleed seats. How many people in the stadium did you really bond with? Did you get to talk to Nadal or Djokovic? Did you even get to hear what they said to someone who did?

Stay home and invite a dozen friends over or find a neighborhood bar that will be playing the game on multiple screens and go there if your home or apartment won't handle the crowd and the noise. Start your own ritual. Where's your sociological imagination?

The answer is fun, pure and simple. It's why college students who hate sports go to football games, why people with really small kids bother to buy them tickets to movies or plays, why people will spend 8 dollars plus tip on a beer in a bar when a six pack in front of the TV is cheaper, and why its not too hard to get a lot of people to shell out a small amount of money to see a band they'd never hear of live. It's not "better," it's not ritual, it's pure and simple fun.

The dichotomy between a highly ritualized form of particpatory spectatorship based on 'being there' at an event, and a more comfortable but less communal and ceremonial mediated experience is too simplistic. Radio and especially TV audiences and broadcasters have long created forms of highly ritualized viewing for live events - from sports finals to state funerals, Royal weddings and peace treaty signings - that create a heightened sense of community (everyone knows that everyone else is watching, people watch together and turn viewing into a ritual) and of being 'present' as history is made. Dayan and Katz called these ceremonial mediations 'media events' in their book of the same name (published in the early 1990s), and there has been a lot of work on the topic since in media studies. A media event differs from being at the stadium in several ways, obviously. Among the differences are the generality of the occasion and the simultaneous involvement of vast spatially dispersed groups, including whole societies, in ritual modes (such as crowning national champions). Anothern is the dislocation of ritual performance and even of 'the event' itself such that it appears to take place, in the words of Dayan and Katz, in the very airwaves.

That's also why no matter how dreadful of a person one might be, after going to a church service on a Sunday morning, he or she will feel great; as a reborn religious person. The consciousness involved in rituals is powerful.

[…] Livingston, J. (2013, September 12). Why attend sporting events when the view is better from the couch? Retrieved from https://thesocietypages.org/socimages/2013/09/12/ritual-belonging-and-the-elementary-forms-of-the-u-… […]