Repeatedly at SocImages, we’ve offered data showing that the middle class is shrinking.  The rich are getting richer, while a rising percentage of Americans are having trouble making ends meet.  One measure of this is the number of households that include both adults and their adult children.  About 12% of 25 to 44-year-olds lived with their parents in 1960, that dropped to 9% by 1980 and, in 2010, topped out at 17%.  Almost one-in-five adults were living with their parents at the turn of this decade.

There are two scenarios, here, however.  One indicates the decreasing financial well-being of the elderly: parents move in with their children because they can’t afford to live alone, perhaps after retirement.  The other indicates the decreasing financial well-being of young and mid-life adults: children are moving in with their parents because they can’t get a good start to life.

It turns out that the first scenario is actually on the decrease, while the latter is on the increase.  The rise in co-residence is a consequence of the failure of our economy to integrate young people into jobs that pay a living wage.  Literally, a growing number of Americans — both young people and those in mid-life — can’t afford to leave the nest.  And, no, this didn’t start with the recession, it started in the ’80s. 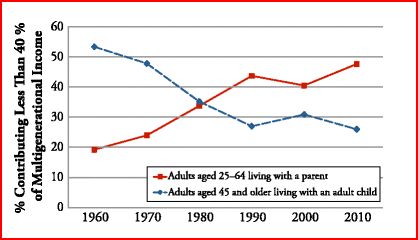 We’ve done a decent job trying to ensure that the elderly don’t live in poverty, it’s time to start working on making sure the rest of America doesn’t either.

Thanks to @toddgorman for the link!  Cross-posted at Pacific Standard and The Huffington Post.

[...] can keep that chart in mind as we consider the social effects of such low-wage work. Here the blog Sociological Images (which I encourage you to follow and read [...]

First time poster, long time reader. I think this data (and the existence of this post generally) also highlights our North American cultural expectation that parents and adult children will and SHOULD live apart....and by extension that households where parents and adult children live together have something "wrong:" difficult making ends meet, social, mental, or physical disability, etc.

In other cultures there is less of a taboo around parents and children living together until marriage and even after marriage. If you think about it,, it just makes good financial sense for BOTH parties, regardless of their income. Plus its an arrangement that can also provide a higher quality of life especially in the case of single parents (ageing parents have someone to look after them, labour and childcare can be shared).

While increasing financial pressure on our youth is undoubtedly a big part of the story, I wonder if cultural change/increasing globalization/rise of single-parent-hood has anything to do with it too.

Read the title before reading the article and thought," Does this imply that 4 out of 5 adults are homeless?"

[...] “In a World” addresses the under-representation of women in the media and leaves us questioning how we women are socialized to represent ourselves to others. Carol says in one scene, ”Women should sound like women, not like baby dolls who end everything in a question.”And, not only does the film take on issues of gender, but issues of class. As Molly McCaffrey  points out at Bitch Flicks, “this movie shows a young person living at home with a parent and that she isn’t doing so because she’s a lazy, lost, unmotivated slacker.” You know, like almost 20% of adults today. [...]

[...] Nearly 1 in 5 Adults Still Living with Their Parents ‘There are two scenarios.  One indicates the decreasing financial well-being of the elderly: parents move in with their children because they can’t afford to live alone, perhaps after retirement.  The other indicates the decreasing financial well-being of young and mid-life adults: children are moving in with their parents because they can’t get a good start to life.’ It’s 17% of 25 to 44 year olds. [...]

Many parts of society are much different then they were many years ago. It is very common to see even grandparents raising their grandkids, along with young adults moving in with their parents, I agree, people are not paid enough to financially take career of themselves.