Race and Beliefs about the Ongoing Fight for Civil Rights

Last week sociologist Philip Cohen, who blogs at Family Inequality, attended the 50th anniversary of the March on Washington.  He noted that the crowd was primarily Black; you can see participants in his photoset here.  Are White people unenthusiastic about Civil Rights?  Perhaps.  There is evidence, in any case, that they are less likely than Black Americans to think that ongoing activism is necessary.  Cohen offers the results of a series of polls.

Pew Research Data published in the Los Angeles Times reveals that Black people are less likely than White people to think we’ve made  a lot of progress in the last 50 years.  They are also substantially more likely to believe that Blacks are treated less fairly than Whites in a wide range of circumstances: 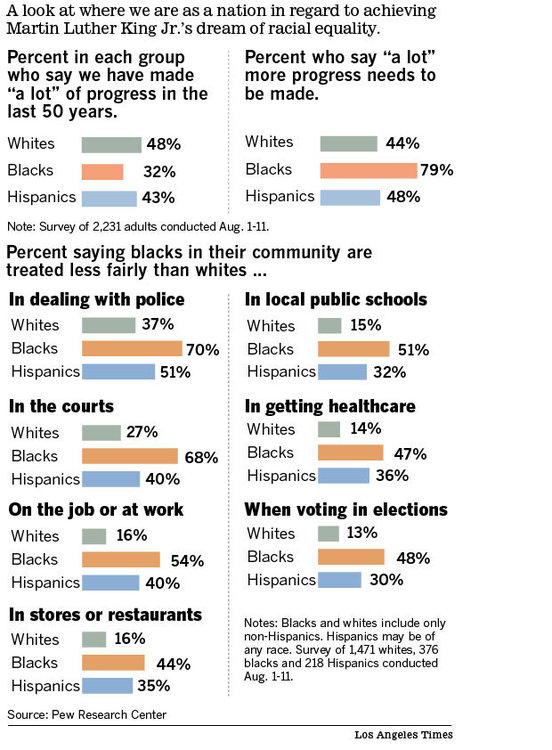 A Gallup poll confirms that Black Americans are less likely than Whites to feel that race-related rights are “greatly improved.”  It also reveals that they are more than twice as likely to endorse new civil rights laws and government intervention to assure non-discrimination. 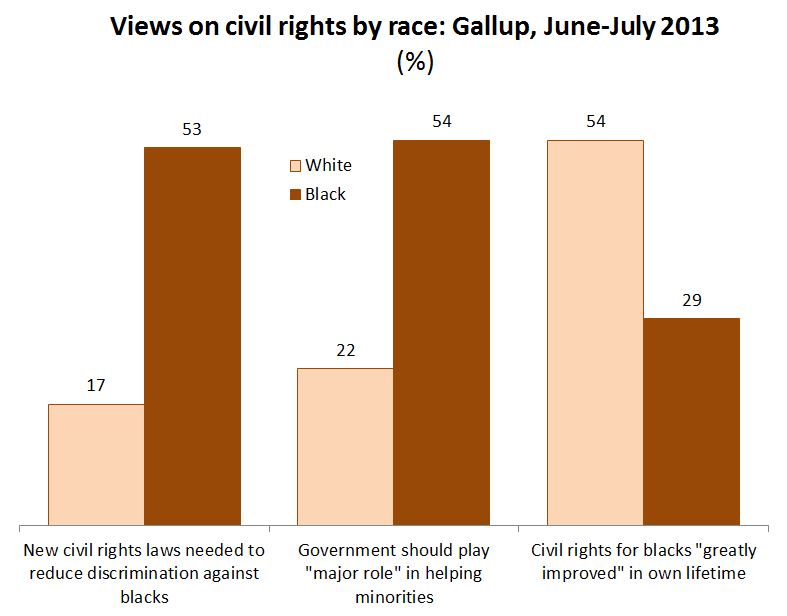 Finally, the General Social Survey asks whether the fact that Blacks are worse off than Whites is due to mainly to discrimination or because of some other cause.  More than half of Blacks and a third of Whites say “yes, it’s discrimination.” 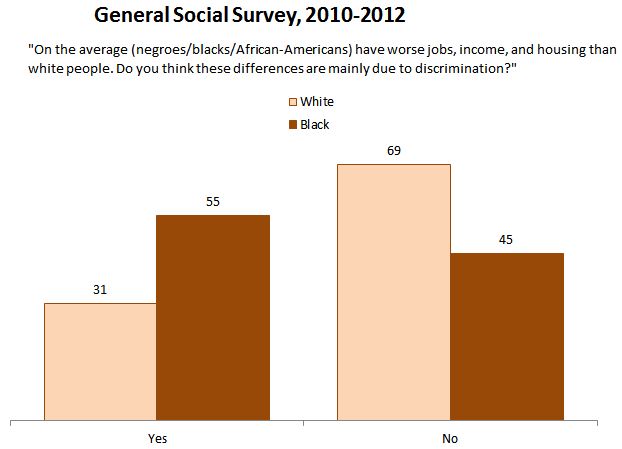 These data reveal that plenty of White Americans are concerned with racial equality, believe we have a long way to go, and support working to improve the treatment of Black Americans. There are also plenty of Black Americans that think things aren’t so bad. Nonetheless, there is a significant and persistent racial gap between the two groups.

Well that's an *interesting* way to interpret the data. As I was reading, the conclusions I drew were that no matter how discriminated the majority of blacks continue to feel (see: all of the polls), the majority of whites persist in saying that NOT a lot more progress needs to be made (fig. 1), we don't need any more anti-discrimination laws because blacks should be happy with what they have (fig. 2), and that black people are NOT worse off mainly due to discrimination (fig. 3).

Where is this "concern for racial equality" you speak of? I'm not seeing it expressed in these polls, so am curious as to where you came up with that conclusion.

I don't agree that the data show "plenty" of white Americans are concerned with racial equality.

What I do see is a profound level of ignorance on the part of white people as to where racism and discrimination actually happen.

Way to interpret the data in a completely self-serving, unhelpful way. Hint: the point of these polls isn't for the self-proclaimed "good white folk" to latch on to an embarrassing statistic and say "SEE, SOME OF US CARE ABOUT YOU AND SOME OF Y'ALLS DON'T EVEN THINK WE'RE THAT'S BAD."

In regards to the polls and not Lisa's embarrassing commentary, I'd be really interested in seeing this further broken down by age and education level.

I think that it would be more informative if for each ethnicity the graph went to 100% and showed the percentages that said "yes", "no" and "I don't know". Or "I agree strongly" "I somewhat agree", "I don't know/ I can't answer", "I somewhat disagree" and "I disagree strongly". These are big questions that many people want to modulate, and things like "a lot of progress" are too vague to respond with a yes/no.

And the "I don't know" responses are very important too, as they reflect that the person questioned admits to not knowing enough to give a meaningful answer which is different than saying "no" to the question.

I always wonder with these questions of perception... how much is it a few people screwing things up.

It only takes one person being a racist dick to you to mess up your whole day. Even if you met thirty people the rest of the day who treated you fairly. But the thing is... those thirty people probably never even saw the one guy being a dick. So if you ask one side, they'd say they see people acting racist all the time. But you ask the other side and the majority can say they haven't seen it and don't act that way themselves. You've made progress to the point where the vast majority of the population is doing what they should be... but it still doesn't feel like it.

This is only in relation to perception of how people are treated -- not structural issue of poverty or equality before the law.

A lot of these questions seem ridiculously lacking in nuance. So, for example, are blacks treated less fairly than whites in my community when it comes to accessing health care? Well, my answer to that depends on what I define as my community. My neighborhood? My circle of friends? My city?

Also, it seems highly likely that some of the issues of fairness would be due to socioeconomic disadvantage rather than race per se. I'd lay odds that poor, less educated people of any ethnicity have a harder time accessing healthcare in the US than their wealthier, more educated counterparts. So even though race and socioeconomic status are closely correlated, I could see where some people would be inclined to answer "no" because it's not as simple an answer as the question suggests. 50 years ago, when you still had "whites only" doctors, hospitals, etc the racism was much more direct.

[...] Lisa Wade: Race and Beliefs About the Ongoing Fight for Civil Rights [...]