In graduate school at the University of Wisconsin-Madison, I proctored law school exams to earn extra money.  At the end of one exam, while I was collecting the final papers, I overheard two students discussing their answers on an essay question about sentencing.  One said to the other: “I gave the rich guy a lesser sentence because I figured, since he had such a cushy life, it would take less punishment to get through to him.”  There’s your next crop of lawyers, I thought, doling out the prison sentences to the poor and letting the rich off with a slap on the wrist.

Well, it turns out that there is a well-documented psychological phenomenon behind what I’d overheard.  Morten B. sent along an essay by Jason Silverstein in which he reviews the literature on the racial empathy gap.  All things being equal, if you show a person an imagine of a dark- and a light-skinned person being harmed, they will most likely react more strongly to the latter.  Studies have found evidence of this using both self-report and measures of brain activity.  Notably, both Black and White people  respond similarly.

Here are the results of six studies using self-report; in the first four, the relationship between race and how much pain subjects attributed to the target was statistically significant: 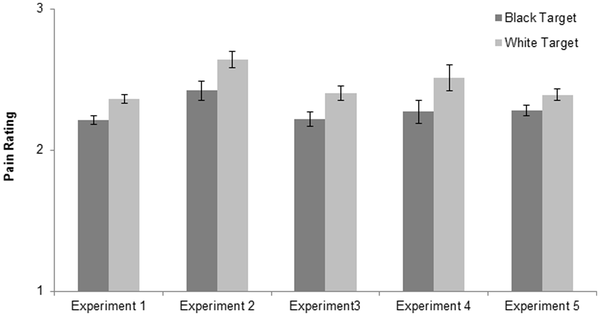 Silverstein explains that this isn’t necessarily about racial animosity or even identification with one’s own group (remember that both Black and White people show this response). Instead, it appears to be related to the perception that Black people have already had to cope with a great deal of pain — from racism, poverty, poor health, etc — and, as a result, have a greater pain threshold.  In other words, they are less sensitive to pain because they’ve been hardened.

Efforts to parse out whether this effect is due to race specifically or perceptions of whether a person has lived a hard life suggest that it might be primarily the latter.  But, as Silverstein points out, we tend to homogenize the Black population and assume that all Black people face adversity.  So, whether the phenomenon is caused by race or status gets pretty muddy pretty fast.

In any case, this is perfectly in line with the soon-to-be-lawyer I overheard at Wisconsin.  He gave the “hardened criminal” a harsher sentence than the person convicted of a white-collar crime because he believed that a greater degree of suffering was required to make an impact.  That was just a hypothetical case, but Silverstein reviews research that shows that the racial empathy gap has real world consequences: undertreatment of pain (even in children) and, yes, harsher sentences for African Americans convicted of crimes.

Cross-posted at Racialicious and Pacific Standard.

For the sake of argument, you seem to be suggesting that this is a perception--that black people have been hardened and desensitized to pain. Before you go assuming that it's a cultural bias, why not consider whether or not it's true?

It is a fact that life circumstances can hardened a person. It's stereotype to assume it applies to all black people, but its also naive to claim that it isn't a legitimate phenomenon at all.

"we tend to homogenize the Black population and assume that all Black people face adversity."

True. Or assume that white people don't face much adversity. I think there's a popular term these days used for how white people go though life without the kind of adversity black people have, but I can't recall it

In the first line of your last paragraph, you spelled "to" with a zero instead of an o

I wonder what would happen if this experiment were replicated with different genders instead of different races, and how social justice warriors and feminists would rationalise away the evidence that society is as misandric as it is racist.

[...] In any case, this is perfectly in line with the soon-to-be-lawyer I overheard at Wisconsin. He gave the “hardened criminal” a harsher sentence than the person convicted of a white-collar crime because he believed that a greater degree of suffering was required to make an impact. (source) [...]

Ah, you mean the thing Adam Smith identified in 1759?
"Every calamity that befals [the powerful], every injury that is done
them, excites in the breast of the spectator ten times more compassion
and resentment than he would have felt, had the same things happened to
other men…To disturb, or to put an end to such perfect enjoyment, seems
to be the most atrocious of all injuries. The traitor who conspires
against the life of his monarch, is thought a greater monster than any
other murderer. All the innocent blood that was shed in the civil wars,
provoked less indignation than the death of Charles I."

I see this in the inverse, not that blacks are hardened, but whites are *weaker.* Which as organisms, they are. Whites are younger in the evolutionary chain. They have newer blood types, suffer more skin cancers and digestive problems. Consider us in our natural environments as animals and blacks would beat out whites on many levels. I'd be willing to bet that this recognition of whites being "higher" on the evolutionary chain is THE explanation for racism against blacks. People have used terms like they're more "animal-like," I would not put it so insultingly. I would simply recognize that they are the oldest in a chain and have proven survivability, whereas whites are just more delicate and more vulnerable.

this graph is ableist

[…] widespread biases whereby black Americans are perceived to be both “prone to violence” and less susceptible to pain. Passing judgment on “a people” as an abstraction rarely leads anywhere good and frequently […]