The Relationship Between Lead and Crime

In the late 1990s, I turned down my publisher’s offer to do a third edition of my criminology textbook.  It wasn’t just that editions one and two had failed to make me a man of wealth and fame.  But it was clear that crime had changed greatly.  Rates of murder and robbery had fallen by nearly 50%; property crimes like car theft and burglary were also much lower.  Anybody writing an honest and relevant book about crime would have a lot of explaining to do.  And that would be a lot of work.

I politely declined the publisher’s offer.  They didn’t seem too upset.

If I had undertaken the project, I probably would have relied heavily on the research articles in The Crime Drop in America, edited by Al Blumstein and Joel Wallman. They rounded up the usual suspects – the solid economy, new police strategies, the incarceration boom, the stabilization of drug markets, anti-gun policies.  But we all missed something important – lead.  Children exposed to high levels of lead in early childhood are more likely to have lower IQs, higher levels of aggression, and lower impulse-control.  All those factors point to crime when children reach their teens if not earlier.

Lead had long been suspected as a toxin, and even before World War I many countries acted to ban or reduce lead in paint and gasoline.  But the U.S., thanks to the anti-regulatory efforts of the industries and support from anti-regulation, pro-business politicians, did not undertake serious lead reduction until the 1970s.

Kevin Drum at Mother Jones has been writing about lead and crime. Because race differences on both variables are so great, it’s useful to look at Blacks and Whites separately.  In the late 1970s, 15% of Black children under age three had dangerously high rates of lead in their blood (30 mcg/dl or higher). Among Whites, that rate was only 2.5%.  By 1990, even with a lower criterion level of 25 mcg/dl, those rates had fallen to 1.4% and 0.4%, respectively. 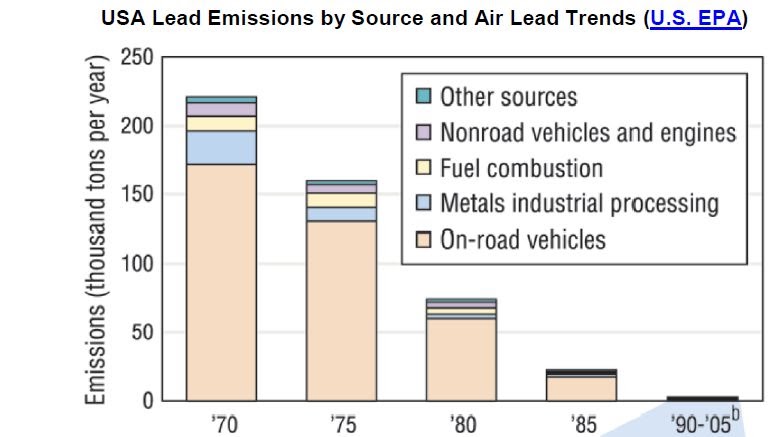 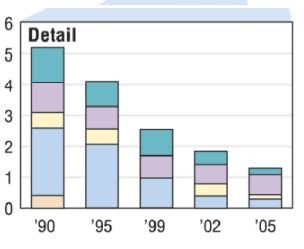 The huge reduction in lead was matched – years later when those children were old enough to commit crimes – with a reduction in crime. (note that the graphs show rates of arrest, which may somewhat exaggerate Black rates of offending): 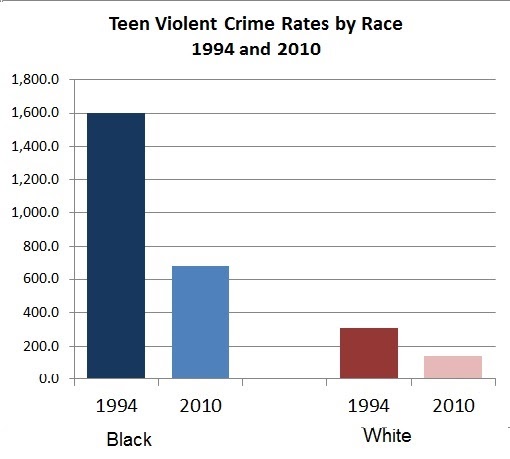 Much of the research pointing to lead as an important cause of crime looks at geographical areas rather than individuals.  A study might compare cities, measuring changes in lead emissions and changes in violent crime 20 years later.  But studies that follow individuals have found the same thing.  Kids with higher blood levels of lead have higher rates of crime.  The lead-crime hypothesis is fairly recent, and the evidence is not conclusive.  But my best guess is that further research will confirm the idea that getting the lead out was, and will remain, an important crime-reduction policy.

But that  depends on how you intepret the data. As the graphs of arrests show, the percentage reductions are roughly similar across races.  Among Black youths, the arrest rates for all violent crime fell from 1600 per 100,000 to less than 700 – a 57% reduction.  For Whites the reduction was from 307 to 140 or 54%. But in absolute numbers, because Black rates of criminality were so much higher, the reduction seems all the more impressive. In that sense, those rates “fell further.”

Arrest rates for Blacks are still double those of Whites for property crimes, five times higher for homicide, and nine times higher for robbery.  Lead may be a factor in those differences.  Remember the lag time between childhood lead exposure and later crime. Twenty years ago, high blood levels of lead among children 1-5 years were three times as high for Blacks as for Whites.

Is there a proposed mechanism of action for how lead would cause a higher likelihood of someone committing a crime? What are the biological effects that would lead to someone engaging in more criminal behavior?

Correlation does not necessarily mean causation.

in Freakonomics, they link the crime drop to the wider availability of birth control and abortion. But like Wg says, correlation doesn't necessarily mean causation. And proving that one thing or the other is THE cause for a crime drop is pretty far-fetched. what about a combination of a number of different factors that don't necessarily cancel each other?

There is no single cause, it was many separate variables occurring simultaneously that improved the bottom line for those most at risk of growing up in poverty that helped reduce "expected" rates of crime for the 1990s (which were predicted in the 70's). One could argue that 20 years (80's and 90's) of US economic expansion, cheap credit, lower inflation, and lower unemployment (after the stagnation of the late 60's and 70's), provided more incentive to not commit crimes, as well as an explosion of new technologies and techniques that improved the efficiency and effectiveness of law enforcement's ability to deter crime, as well as the Donahue-Levitt Hypothesis on legalized abortion, et al.

Is Lead to Blame for High Rates of Violent Crime in Black Communities? — August 27, 2013

Given there has also been a heavy drop in crime in Europe and Australia over the last few decades, I'd like to see how that matches up with the lead hypothesis. Every time I've seen lead as an explanation its only been using North American data and I don't think poverty and exposure to lead mapped so neatly in many other places - poor people in the 60s in Northern England were much more likely to cycle and live away from main roads for example.

Regarding "Lead had long been suspected as a toxin, and even before World War I many countries acted to ban or reduce lead in paint and gasoline.": Is there data for other countries showing similar reductions in crime in the decades after lead removal from gasoline? Knowing this would (might) relieve the logjam seen in the comments.

Here's an entire wealth of blog posts from Kevin Drum on the issue, with lots of links to the source material from the economists who are looking at the data on violent crime and lead exposure at the neighborhood, city, state, national and international level (where the correlation holds true over multiple different time periods as well), and the neurologists who say we now know far more about how lead affects the development of the human brain than we did a decade ago. http://www.motherjones.com/kevin-drum/2013/01/lead-and-crime-linkfest

ALL LOOKING FOR WAYS TO MAKE MONEY ONLINE!

Mail 1000+ random leads from inside the members area EVERY 24 HOURS!