Men are People and Women are Women: The Home Depot Edition

Thanks to @colleeneliza for tweeting us this great example of the centering of masculinity as “normal” and the othering of women.  Notice that Home Depot is offering “Do-It-Yourself” workshops and special workshops for women and kids (screenshot taken 8/18/13): 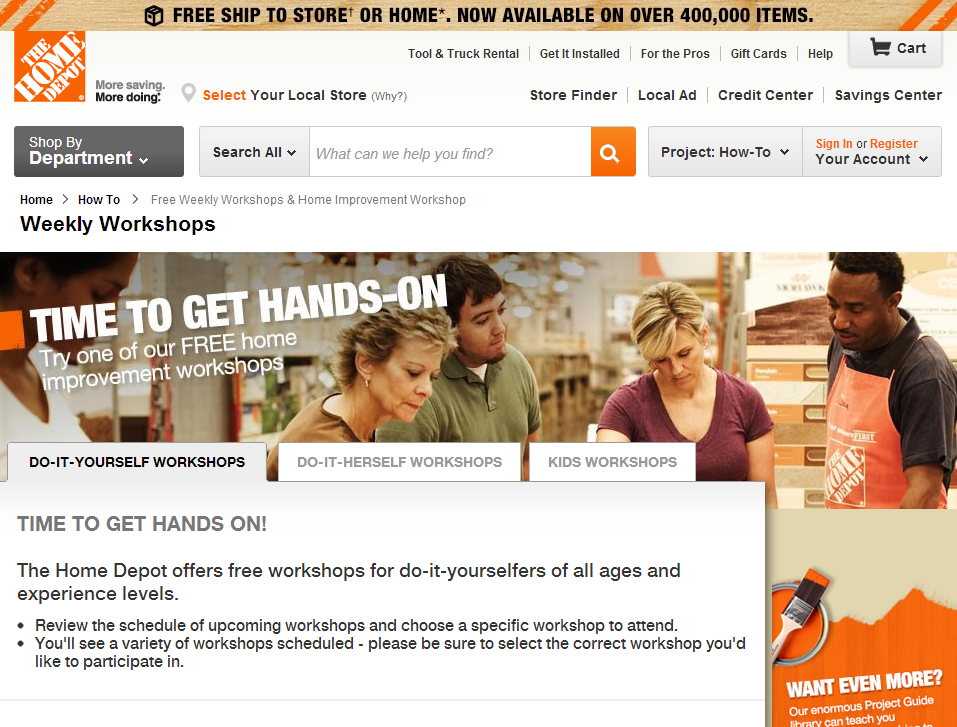 This is just one more example of the way in which men are regarded as people and women as a special kind of person. Like kids, in this case, needing special treatment.  We’ve got lots of them.

Men are people and children are children, too.

Although it doesn't say it anywhere, I'd imagine that the "Do-it-herself" workshops are meant for women only, which is also heavily implied in this video: http://youtu.be/6T8Zhsu38DY

So, this actually doesn't fit into the "men are regarded as people and women as a special kind of person" trope that does actually exist.

Nice job of confirmation bias, though.

A similar bias hangs over the phrase "people of color". It drives me crazy. "White" people don't have "color" because white is the normal or natural state.

If I didn't know anything about the workshops I might agree. But one of my relatives worked at Home Depot for over a decade, and once in a while they'd ask her to run a Do-It-Herself workshop. From how she described it, it sounded like the workshops were mainly about empowering and teaching women how to do their own projects independently. One workshop focused on how to lay tile. Another workshop focused on basic electrical work.

The only problem I had with the workshops is that they asked my relative to run it because she was a woman, and not necessarily because she had any experience on the topic. Sometimes she didn't and had to keep going back to her coworkers to figure out the next step!

I certainly see the author's point here. The "do it herself" heading could imply a separate and unequal status for women, and the gender neutral heading of "yourself" erases gender in a way that masks male privilege. I'd like to offer another reading; however, I'm aware that I may be filtering this through my own maleness, so let me own that up front.

It's possible that Home Depot is actually being somewhat progressive here (even if it is to just exploit a new market of consumers) by creating a "safe space" for women in what has traditionally been considered a male territory, the hardware store. While I'm sure women wouldn't be barred from the "yourself" workshops, they may prefer to avoid the stereotypical male gender performances they'd expect to find there. In that case, the "girls only" option may be more appealing.

And, while changing "yourself" to "himself" would correct the erasure of gendered privilege (assuming that women *are* in fact barred), it wouldn't remedy the situation, because it would create an explicitly exclusive space that only served to reify the status of men.

Thus, while not beyond criticism (obviously), Home Depot might deserve a bit of a benefit of the doubt on this one for creating safe spaces for women.

I'd also cut the advertiser some slack here. I used to work at a community
radio, which offered workshops for broadcasters about the technical
aspects of the studio. Many women, especially older women with a
working-class or rural (often migrant) background, were extremely shy
and had been brought up to believe that the technical stuff is for men.
If brought together in a group with men (again, especially older and so on),
the men tended to mansplain, taking the devices from women to "show"
them instead of letting the women figure out for themselves. In an all-female group, the women had a much more positive experience
because they realized they were not alone, that they could figure out for themselves, that the
technical stuff was not that hard, and that they could run a broadcast
alone. So the fact that there are workshops for women only might be actually
rather due to the realization of gender biases in society as a whole - especially if it's true, as other
commentators have noted, that the "yourself" category is for everybody,
not just men.

It's worth noting that on the Home Depot website, the banner image of a class of three women to one man (with the guy in the apron presumably being the instructor) actually changes when you click on the other tabs, indicating that the general 'Do It Yourself' class is being marketed quite heavily as a thing for women anyway, and not a masculine space at all.

Looks to me more like HD is trying to deal with the consequences of the "men are people and women are women" problem more so than exacerbating it.

Granted, they're ultimately just trying to sell more stuff by whatever means possible but they know from lots of market research that a great many women don't like even being in hardware stores, much less doing any actual DIY construction projects. For that matter, most men don't really want to do serious construction work either (and also generally have no clue as to how) unless they're in the business. It's weird how while women are supposed to be clueless about building stuff, men are somehow conversely supposed to have an innate and instinctive knowledge of the subject. It's so nutty it's almost comical.

That's why so many plumbers run TV ads that show a typical bumbling husband/dad trying to fix the sink and making a hot mess of it only to have his adoring but somewhat condescending wife come in and save him... by calling a "real" plumber. They end with "We fix what [dad/he/your husband] tried to!" or something to that effect. In the cutthroat world of hawking plumbing supplies and repair, plumbers are plumbers and married couples are bumbling idiots. Home Depot seems positively progressive compared to that (emphasis on 'seems').

But while there are still a lot of women who shop at big hardware stores all by themselves and can build anything that doesn't require a penis to install or assemble that men can, but they can go to the DIYourself workshop if they want and the women who are making their first attempt at trying something they've been told their whole lives they can't or shouldn't do can go to the DIHerself workshop for a less intimidating introduction.

This same thing happens among many subjects (fitness, martial arts, firearms, auto mechanics, etc..) but I guess it can be seen as either evidence of a gradually changing paradigm (more and more women are learning how to do things they didn't used to do hardly at all) or as evidence of a continued effort to enforce the status quo (women are still being segregated from men to learn certain skills and thus are implicitly expected to be incompetent and fearful at the outset).

I guess all this just means that these kinds of things should be assessed on a case-by-case basis and the only way to do that is by attending the actual class to see if it has any class.

[...] Men are People and Women are Women: The Home Depot Edition » Sociological Images [...]

The problem here is the parallel. If Home Depot hadn't chosen that ridiculous name for the women's workshops that mirror the general audience workshops and make them appear male oriented rather than general, there wouldn't be the "people = men" problem. "Women's Workshops" would've worked just fine, but they had to be cutesy. When will businesses stop treating women's issues as a place to act like every woman is a Kewpie Doll?

Is every instance of separate, unequal? Granted its a slippery slope, but isn't do-it-herself, just another form of affirmative action? I suppose there is no way to really know if HD is saying that women are somehow inferior to "people" or if women have certain historical and cultural disadvantages that HD is attempting to reconcile.

It is an interesting discuss, for sure, but any conclusion on one side or the other ( or ever a third of 4th side) seems exceedingly problematic, at best. Whenever we start to group all instances of some occurrence into a positive or negative scenario, we are going to run into trouble.. because those evaluations tend to be inductive fallacies, as they draw more information from the premises, than is actually supportable in fact or intent. There is a difference between being critical and being shrill.

"Let's be careful out there, people." -- Hill Street Blues, (at the end of every morning roll call)

[...] Men are People and Women are Women: The Home Depot Edition » Sociological Images [...]

They do this on the Canadian page as well. The "Yourself" link is for men... I guess women aren't people after all... The pink hard makes me feel stabby inside.

I'm sexist and like traditional men, so I don't mind or take any offense at all to it.

You can get several stores around like Home Depot which have such great home décor objects. https://homedepotcomsurveys.online/

You can get several stores around like Home Depot which have such great home décor objects. www.homedepotcomsurveys.online/